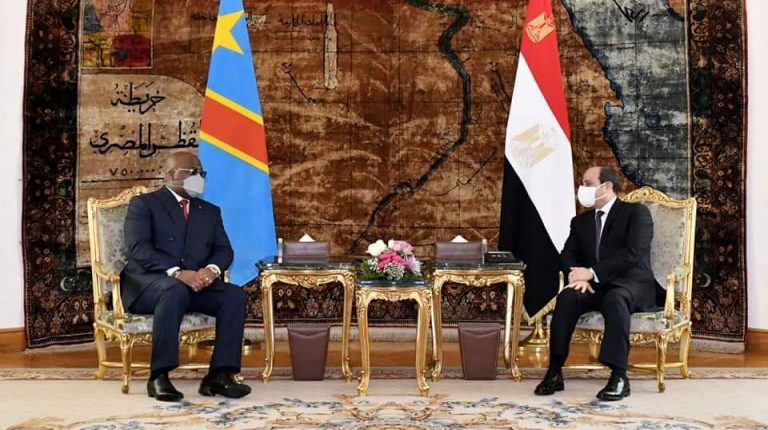 CAIRO: President Abdel Fattah El-Sisi has affirmed Egypt’s desire to reach an agreement on the filling and operation of the Grand Ethiopian Renaissance Dam (GERD).

His remarks coincide with the launch of a new round of negotiations in Kinshasa in the Democratic Republic of the Congo. The meeting is expected to conclude on Tuesday.

According to a statement by the Egyptian Foreign Ministry, Foreign Minister Sameh Shoukry delivered a letter from President El-Sisi to President of the Congo Felix Tshisekedi confirming “Egypt’s keenness for the Renaissance Dam negotiations sponsored by the Congolese President to succeed.”

In his message, El-Sisi said that Egypt had a sincere political will to reach the desired agreement at the earliest possible opportunity and before the next flood season.

Egypt supports President Tshisekedi’s efforts and hopes the meetings in Kinshasa launch an effective path for negotiations with the participation of international partners, he added.

This will enable the three countries involved — Egypt, Sudan and Ethiopia — to find solutions to the controversial technical and legal issues, with the aim of reaching a comprehensive agreement.

“The success of the ongoing efforts to settle the issue of the Renaissance Dam, and to avoid aggravating the situation in a region that is already suffering from turmoil and instability, requires the availability of political will on all parties to reach a fair and equitable agreement,” the president’s message said.

In his message to Tshisekedi, El-Sisi affirmed Egypt’s wish for the success of the GERD negotiations sponsored by the Congolese president.

He said Egypt appreciated the efforts made by the Democratic Republic of the Congo to launch a negotiation process that led to a fair, balanced and legally binding agreement that took into account the interests of the three countries and enhanced cooperative relations.

President Tshisekedi said earlier that the countries involved in the GERD negotiations were determined to end the dispute.

He said the dispute was an opportunity for rapprochement between Egypt, Sudan and Ethiopia.

Tshisekedi added that after discussions with the higher authorities of the three countries, he intended to end the dispute and bring their points of view closer.

The Egyptian Foreign Ministry separately said that the Kinshasa meeting represented a “last chance” that must be seized to achieve the interests of all parties involved in the dam issue.

“Egypt has been negotiating for over 10 years with sincere political will in order to reach an agreement that achieves Ethiopia’s development goals and preserves the rights and interests of the two downstream countries,” the statement added.

It stressed the need for the dialogue in Kinshasa to lead to the launch of a new round of negotiations that were effective, serious and attended by international partners to ensure their success.

The Egyptian statement reiterated the country’s desire to make the meeting a success and work to overcome the points of disagreement that obstructed the previous rounds of negotiations.

It stressed that if all parties involved had political will and good intentions then they would be able to reach an agreement that opened the door for cooperation and integration between the countries of the region.

Initial negotiations did not reach a consensus and further consultations were proposed on the negotiation methodology after Sudan announced that Ethiopia had increased its demands on the division of the Nile waters.

According to diplomatic sources, Egypt and Sudan demanded the necessity of stopping any actions, especially the start of the second filling, until the negotiation was resolved. They stressed the need for adhering to a four-way mediation alongside the African Union.

Sudan and Egypt called on the African Union to put in place specific negotiation mechanisms, in addition to signing a binding agreement on the Ethiopian side and a written pledge not to take any steps that harmed the downstream countries.

The negotiations began with technical committee meetings. Direct meetings followed between foreign and irrigation ministers amid expectations that it would end on Tuesday with a summit between the three heads of state if progress was made at the technical and ministerial level.