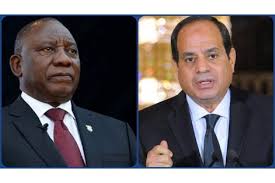 CAIRO, Oct. 14 (Xinhua) — Egyptian President Abdel-Fattah al-Sisi received on Wednesday a phone call from his South African counterpart Cyril Ramaphosa, during which they discussed the Ethiopian grand hydropower dam built on the Nile River, said the Egyptian presidency in a statement.

Sisi reiterated Egypt’s stance regarding the Grand Ethiopian Renaissance Dam (GERD), which seeks to reach “a binding and comprehensive legal agreement” on the rules of filling and operating the dam through tripartite negotiations with Ethiopia and Sudan, according to the statement.

The Egyptian president also expressed rejection of “any action or procedure that affects Egypt’s rights to the Nile water.”

For his part, Ramaphosa, the current one-year president of the African Union (AU), expressed keenness on continuing intensive coordination with Egypt and working on reaching “a fair and balanced agreement” on the vital issue, said the Egyptian statement.

Ethiopia started building the GERD in 2011, while Egypt is concerned that the dam might affect its 55.5-billion-cubic-meter annual share of Nile water. Sudan has recently been raising similar concerns over the dam.

Over the past few years, tripartite talks on the rules of filling and operating the GERD have been fruitless, including those hosted by Washington and recently by the AU.

France to close dozens of mosques, Islamic schools this year