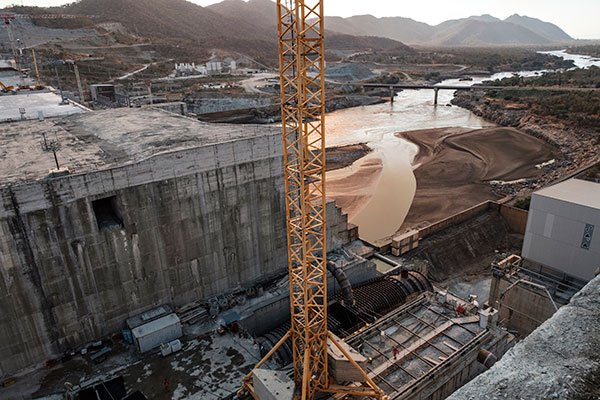 CAIRO – Egypt said Thursday it is willing to resume negotiations with Sudan and Ethiopia over the filling of a controversial mega-dam that has been a source of tension between all three Nile basin countries.

“Egypt is always ready to enter into negotiations and participate in upcoming meetings… to reach a fair, balanced and comprehensive agreement,” the foreign ministry said in a statement late Thursday.

The ministry said the agreement would have to take into account “Egypt’s water interests as well as those of Ethiopia and Sudan”.

The online meeting comes after Addis Ababa said it would not delay filling the Grand Ethiopian Renaissance Dam (GERD) which it began constructing in 2011.

In April, Ahmed proposed proceeding with the “first stage filling” that would collect 18.4 billion cubic metres of water in the dam’s reservoir over two years.

But both Egypt and Sudan fear the reservoir – which has a capacity of 74 billion cubic metres – will trap their essential water supplies.

Hamdok and Abiy’s talks were the first after a diplomatic spat that broke out between Egypt and Ethiopia reached the UN Security Council.

Filling and operating the dam “would jeopardise the water security, food security, and indeed, the very existence of over 100 million Egyptians, who are entirely dependent on the Nile River for their livelihood,” Egyptian Foreign Minister Sameh Shoukry said in a letter to the UN Security Council dated May 1.

In a response dated May 14, Ethiopian Foreign Minister Gedu Andargachew accused Egypt of being obstructionist.

“Ethiopia does not have a legal obligation to seek the approval of Egypt to fill the dam,” Gedu said.

Egypt wants Ethiopia to endorse a draft agreement emerging from the talks earlier this year facilitated by the US Treasury Department, which stepped in after Egyptian President Abdel Fattah al-Sisi put in a request to his ally US President Donald Trump.

But Ethiopia skipped the most recent round of those talks and denies any deal was agreed upon.

Cairo’s heavily worded letter to the Security Council raised the spectre of the possibility of armed conflict stemming from the dam deadlock.