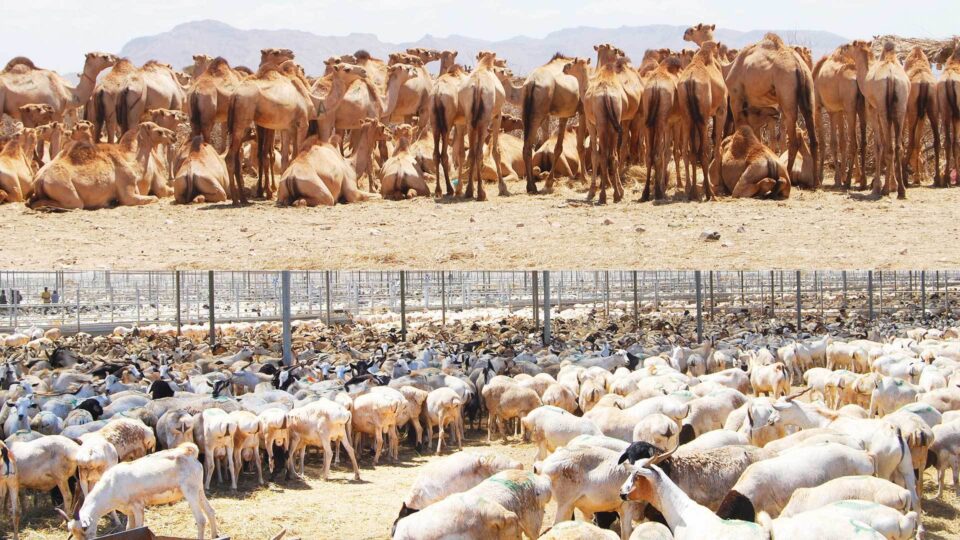 Image: Zainab* and her seven-month-old son, Mohamed*, at a malnutrition stabilisation centre supported by Save the Children. More content available in links below. Photo credits Sacha Myers/Save the Children
Millions of children and their families in Somalia will be left without enough food to eat as crop and vegetable production is expected to drop by 75-80 percent this season[i] and income from livestock sales, the basis of survival for many Somali families, is expected to drop by up to 55 percent, Save the Children said today.
A new analysis conducted by Save the Children[ii] assessed the economic impacts on families of past shocks, including locust swarms and extreme weather events, and the expected below-average rainfall for the coming three months.
Save the Children’s teams on the ground are already witnessing the devastating impact on families. Mothers are desperately trying to scrape together just one meal a day for their children, and people have to walk countless hours a day to find water and pasture for their livestock. Children are suffering from hunger and malnutrition because they don’t have enough to eat.
The new analysis predicts that between April and September 2021 in the southern states of Somalia, crops will only provide 15 percent of food for poor families, and the income from crop sales will only buy 10 percent of the food families need to survive. In comparison, in 2017/18, when the country faced its last major famine, poor families sourced 50 percent of their food from their crops and generated 40 percent of their income from crop sales.
In central and northern Somalia, locust swarms and poor rains are already eroding livestock herds. According to the analysis, income from livestock sales is expected to drop by 40-55 percent from 2017/18 levels as animals die and others lose condition and are no longer fit to sell. Milk production is also expected to drop by 50-65 percent compared to 2018/19, which further exposes children to the risk of malnutrition.
Ikran*, 40, a pastoralist and mother of 11 children, told Save the Children:
“Our main source of food comes from selling our livestock at the local market. But the drought and water shortages are devaluing our livestock. Sometimes the money I get from selling the goats isn’t enough to buy the food I need.”
“Things are becoming more expensive. In normal times, if I wanted to buy 20kg of rice it used to cost USD $10-11 but now it’s USD $17-18.”
Save the Children says USD $150 million is urgently needed to protect the lives and livelihoods of 1.9 million children and adults and to provide them with food, healthcare, education and water and sanitation services over the next six months.
Zainab*, 28, and her children were displaced during the 2017 drought and have now lost their business due to the current drought and water shortages. Zainab told Save the Children:
“After the drought started, my business collapsed and now I’m jobless. I didn’t have enough milk and water to feed my child (Mohamed*)… he was very weak, couldn’t move, had a fever, was vomiting and had diarrhoea. He couldn’t eat and was unable to take breastmilk.”
Mohamed was diagnosed with severe acute malnutrition and received treatment at a Save the Children’s supported stabilisation centre.
Mohamud Mohamed Hassan, Country Director for Save the Children in Somalia, said:
“Save the Children’s analysis clearly shows the situation for children and their families in Somalia is rapidly deteriorating. But there’s still time if the international community acts now to prevent a catastrophic situation for children.
“Our teams on the ground are witnessing the devastating reality of the current water shortages and drought on children. In addition to hunger, the drop in household incomes also has other ramifications for children. Often parents have to withdraw their children from schools because they cannot afford the fees and they don’t have enough money to pay for drinking water or healthcare if their children get sick.
“This year’s drought is just one more crisis in a long list of climate-related disasters in Somalia. Droughts, floods, cyclones and locust infestations have increased in frequency and severity in the country in recent years, almost obliterated the ability of communities to cope as they have no time to recover before the next crisis hits.”
Save the Children is calling on donors to and provide immediate emergency funding to sustain and significantly scale up the response to help prevent thousands of children dying from hunger.
The organisation is also urging the Government of Somalia to prioritise the humanitarian response and ensure the current political deadlocks between the Federal Government and Member States do not obstruct the delivery of humanitarian aid to children and their families impacted by the crisis.
Source: Save the Children
previous post