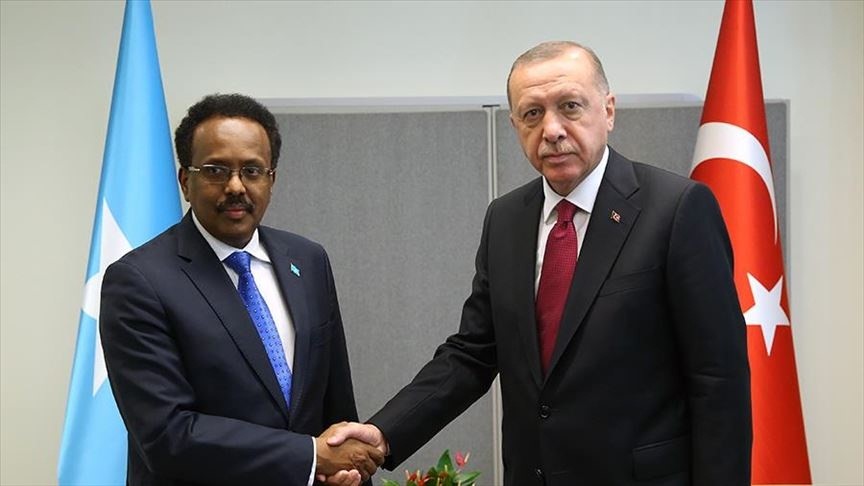 Turkey sees Somalia as a strategic bridgehead to the Horn of Africa and beyond, but for this to become a reality, political stability in the country has to be restored. Turkey’s attempts to rebuild the Somali Defence Force without a guiding national political framework is tantamount to taking a journey without a roadmap.

The West arrogantly claimed that al-Shabaab precipitated the 2011 Somali famine when in fact the culprit was American policy under the Obama Administration, which banned food deliveries to indigent people in order to punish al-Shabaab. Meanwhile, the so-called Muslim and Arab world was indifferent to the consequences, despite having the resources to prevent the death of nearly 250,000 people – mostly women, children and the aged. Only Turkey responded in an exemplary manner when President Recep Erdoğan stepped up to the challenge.

Erdoğan, his wife and a team of Turkish humanitarian NGOs flew to Mogadishu and visited camps for destitute people who had journeyed far in search of food, and they saw the devastation up close. They were visibly shaken by what they encountered, and Turkey offered generous humanitarian help. But a decade after this show of humanity, Turkey’s involvement in the country appears exploitative and self-serving.

At the time, a Turkish humanitarian flotilla was joined by others and descended on Somalia. Once the emergency was contained, Turkey did not pull out as other countries often do after such a crisis, but stayed and rebuilt hospitals, schools, roads and the main air and seaports to jumpstart economic activity. Once the perimeter of the Mogadishu airport was secured, Turkish airlines began to fly scheduled flights – the first international airline to do so since 1991. The Mogadishu-Djibouti-Istanbul route has since become one of its most profitable.

Subsequently, Turkish companies signed agreements with the inept Somali government to manage the airport and the seaport, the two largest centres of economic activity in the country. Furthermore, Turkey made available a large number of scholarships to enable Somali students to study at its universities, and Somali business people flocked to that country.

To signal Somalia’s strategic importance for the Turkish agenda in Africa, it built the largest embassy on the continent on the shores of the Indian Ocean. Shortly thereafter, Turkey constructed a huge military facility on the outskirts of the capital, which was designed to become the training centre for the Somali military. More recently, significant numbers of Somali youth were taken to Turkey for further military and language training. The first cohort has already returned to Somalia.

After being virtually destroyed by various local and foreign military campaigns over the previous two decades, Mogadishu has experienced a construction boom in the past eight years. A large number of these public and private projects were undertaken by Turkish contractors and the only Somalis involved were the labourers. Very few Somalis have the skills and resources to compete with the Turkish construction companies, and wealthy Somalis who are developing properties all across the country are evidently satisfied with the quality of the work done by the Turks.

Somalis across the country appear to be elated with Turkey’s involvement in Somalia. An informal survey I conducted in Mogadishu over the past three months indicates near unanimous approval of Turkish engagement. However, I see signs that the cosy relationship may perhaps have a soft underbelly.

I recently met with the Turkish ambassador and the African Union Mission to Somalia. Their views mirrored the American diplomat who heads the UN office in the country: they think that the advancement of civic politics is outside their field of focus, which is security and economic reconstruction. He emphatically stated that “Somalis are chaotic” and need to sort out their politics.

Such remarks represent a strange understanding of politics. To assume that civic politics will somehow emerge on its own is wrong and demonstrates a failure to understand that sectarian politicians had been responsible for producing the catastrophe. The current assumption of the Turkish government is that sectarian Somali leaders will somehow wise up, leave their retrograde politics behind and be responsible leaders, which is what their people desperately need.

ll the indications are that the balance of trade between Turkey and Somalia is totally lopsided and in favour of the former. The Turkish companies managing the airport and the seaport are in no hurry to train local entrepreneurs or public agencies to take over the management and operation of those enterprises, neither are the private Turkish construction companies involved in rebuilding public and private facilities in a hurry to train Somali public and private contractors so that they can ultimately take over much of the industry.

However, although more than three decades have passed under three regimes, there has been no sign of such change. Turkey’s wilful blindness to this reality is guided by its economic and strategic interests.

Turkey sees Somalia as a strategic bridgehead to the Horn of Africa and beyond, but for this to become a reality, political stability in the country has to be restored. The military base and the training of Somali troops unattached to an inclusive political framework will produce one of three realities: first, the military might become dominant in the country and relegate political leaders to a supplicant grade. The Somali president recently used Turkish-trained troops to suppress a peaceful demonstration by the political opposition in Mogadishu. This development indicates that the military will be used for political, rather than for security and national defence purposes.

Second, the Turkish-trained military force might stage a coup, and third, the corrupt political order might segment the military into factions and thus instigate another civil war. None of the scenarios reflect the spirit of President Erdoğan’s visit and will fundamentally undermine the Somali public’s resounding approval of the Turkish intervention.

All the indications are that the balance of trade between Turkey and Somalia is totally lopsided and in favour of the former. The Turkish companies managing the airport and the seaport are in no hurry to train local entrepreneurs or public agencies to take over the management and operation of those enterprises, neither are the private Turkish construction companies involved in rebuilding public and private facilities in a hurry to train Somali public and private contractors so that they can ultimately take over much of the industry.

Equally disturbing is the absence of any initiatives by the Somali government to start training people in these trades. By marginalising Somalis in these vital vocations, they will be deprived of the economic benefit of reconstruction, which might fuel feelings of hostility towards Turkey and undermine the confidence ordinary Somalis have in that country.

Attempting to rebuild the Somali Defence Force without a guiding national political framework is tantamount to taking a journey without a roadmap. The regime’s recent use of Turkish-trained troops against the political opposition should be a wake-up call to the Turks, who however appear to have their heads in the sand. Furthermore, the economic marginalisation of Somalis during the reconstruction is a social tinderbox waiting for a spark. The combination of a militaristic regime and the economic marginalisation of the population is a lethal brew bound to wreck the prospects of what could be a productive partnership.

An alternative path for Turkey is to use its tremendous influence to take three steps: first, it should strongly encourage the regime and the international community to lend support to the civic movement. Second, it should ensure that the troops it has trained do not become an oppressive instrument, and finally it should limit Turkish business penetration in the local market until Somali entrepreneurs regain their competitive edge.