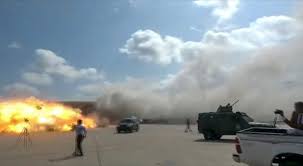 On December 30 an explosion took place shortly after Yemen’s newly established unity government landed at the airport in the southern port city of Aden, resulting in at least 22 deaths and 50 injuries.

Hours later, another explosion occurred near the Maasheq presidential palace, which was where Prime Minister Maeen Abdulmalik, various cabinet members, and Saudi Arabia’s ambassador to Yemen were staying for security reasons. Along with the UN, the governments of the United States, Egypt, Jordan, the United Arab Emirates, and other countries quickly condemned this violence.

Unknown are the culprits. Yemen’s official government blames the Houthi rebels (who denied this accusation and condemned the Aden attack), while others point their fingers at other parties. Regardless of which actor bears responsibility, Yemen’s unity government will face no shortage of extremely difficult political and security crises that will make implementation of the Riyadh Agreement difficult.

Announced on December 18, the new Yemeni unity government is comprised of 24 ministers, including figures loyal to President Abed Rabbo Mansour Hadi, the Abu Dhabi-sponsored Southern Transitional Council (STC), the Yemeni Muslim Brotherhood offshoot, al-Islah, and other factions. Yemen’s Prime Minister Main Said has retained his post, although changes have occurred in other ministries.

The Saudi Foreign Ministry hailed it as “an important step towards achieving a political solution and ending the crisis in Yemen.” President Hadi called on this new government to take on Yemen’s major economic problems following more than six years of civil war. For both Saudi Arabia and Hadi’s government, the stakes are high to prove whether the unity government can successfully end the rift between Yemen’s official government and the STC.

This unity government is the culmination of Saudi efforts to resolve Yemen’s “southern question” against the backdrop of consolidated Houthi gains in the north. Fighting between Hadi’s forces and the STC, which are both nominal allies in the anti-Houthi front, has been a “civil war within a civil war” that Riyadh wants resolved swiftly. From the kingdom’s perspective, the Hadi-STC rift is dangerous because it undermines the Saudi-led Arab coalition’s unity against the Houthi rebels who have established their own proto-state in northern Yemen with support from Tehran.

But previous efforts under Saudi auspices have proven futile and there is no guarantee that Yemen’s newly formed unity government will succeed. In the past, the STC has declared “self-rule” mainly as a bargaining chip in order to return to negotiations with Riyadh and Hadi’s government with greater leverage. The STC could easily issue another “self-rule” declaration down the road in order to intensify pressure on Hadi, who enjoys wavering support among his loyalists. The separatist group has perhaps concluded that it is best to let time wear out the 75-year-old Hadi as his influence fades, betting that he will continue relinquishing power to other factions in Yemen, chiefly the STC and the Houthi rebels.

For Riyadh, there are fears about the Yemeni crisis resolving with a Houthi-controlled capital in Sana’a and an STC-ruled capital in Aden, with the Hadi government sidelined by these two power centers.

The Factor of Al-Islah

There are a host of problems between Yemen’s official government and the STC which are difficult to imagine disappearing any time soon — and they all create more challenges to Hadi’s legitimacy. Questions about political Islam and al-Islah’s role in Yemen’s future are critical to efforts aimed at resolving this “civil war within a civil war.”

From the STC’s perspective, al-Islah poses a dangerous Islamist threat which has a “northern tribal-military structure that seeks to subjugate the south.” The fact that Hadi’s government has allied itself with al-Islah is a serious source of tension between Yemen’s UN-recognized government and the STC. In the past, the Abu Dhabi-backed group has refused to make concessions to Hadi’s administration until it ends its alliance with al-Islah.

Yet Hadi has not ever abandoned al-Islah because the Islamist party has been his main ally in recent years. This alliance, and al-Islah’s popularity among Yemenis especially in the northern and central areas of the country, is key to Hadi’s legitimacy as a Yemeni head of state. The UAE, for its part, would prefer an outcome to the Yemeni crisis in which al-Islah is marginalized. Abu Dhabi sees Hadi’s presidency as problematic from the standpoint of Emirati ambitions in relation to ports in southern Yemen.

With a new U.S. administration coming to power in several weeks, it will be important to note how Washington’s policies shift in relation to Saudi Arabia and the Yemeni crisis. It will also be critical to see the shifting dynamics between the different factions within this unity government, and the extent to which the implementation of the Riyadh Agreement can succeed, if at all.

Of course, these grave problems between the STC and al-Islah exist alongside countless other crises that will also challenge this unity government. From COVID-19 to the ongoing fight with the Houthis in the north and the world’s worst humanitarian catastrophes, no shortage of issues make governance extremely difficult for this government that recently came together under Saudi auspices, and had a dangerous arrival in Aden at the tail end of 2020.