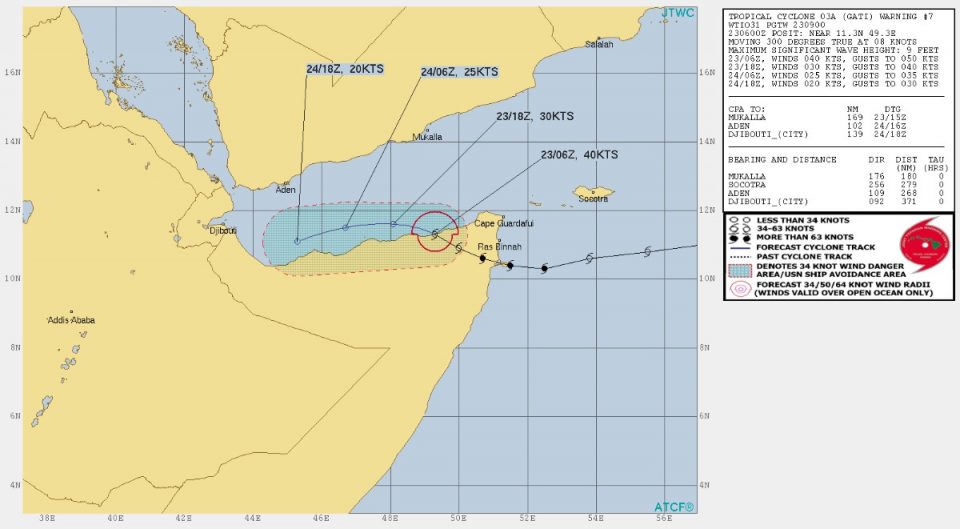 Fishing activities, transportation, other businesses paralyzed in Bossaso along Gulf of Aden, other coastal towns

Cyclone Gati, which brought along heavy rains with above average strong winds, mainly affected Bossaso and Hafun regions in the northeastern Puntland State.

Hafun District Commissioner Mohamed Yusuf Garow confirmed the deaths to local media, noting: “Roads, power lines and houses have been destroyed. The rain has weakened but expected to pick up in the evening.”

Urging fishers not to venture out to sea, he said though the cyclone has weakened, the sea remains rough due to strong winds.

Flash floods and extreme hypothermia have also killed an unknown number of livestock. Bossaso is famous for its ports from where livestock are exported to markets in the Gulf countries. Many farmers herd their animals in the region awaiting export which might take weeks or even months.

The Food and Agriculture Organization said in a Monday statement: “Heavy rains surpassing expected annual total amounts were reported in some areas including Bossaso (128mm), Balidhidin (103mm), Iskushuban (72mm) and Caluula (72mm) in a single day. Several other places continue to experience heavy downpour this morning.”

Experts said the rains which will be experienced in the Horn of Africa region during the cyclone period amount to the full average that meteorologists record in a whole two-year rain period in the same region.

Fishing activities, transportation and other businesses have been paralyzed in Bossaso along the Gulf of Aden and other coastal towns.

Internally displaced people are said to be among the worst affected by the rains.

No lockdown, few ventilators, but Ethiopia is beating Covid-19