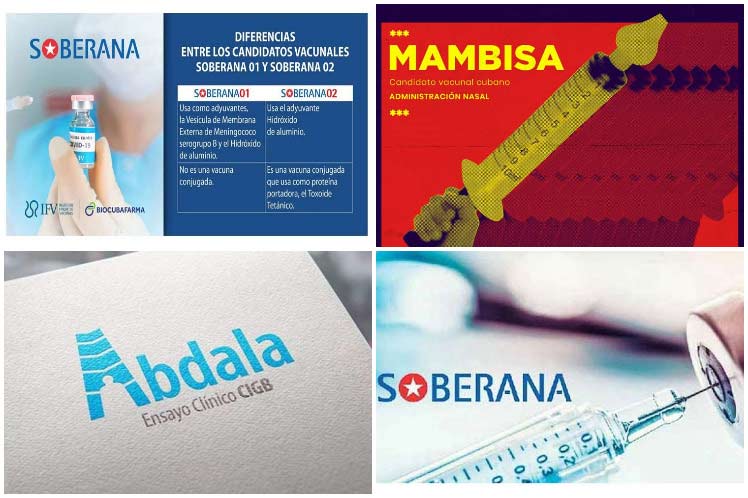 Our mission is loftier than just earning a few dollars. Our mission is to create a doctrine about human health, to set an example of what can be done in this field, which is obviously the most crucial for everyone in the world. People’s lives and health are in doctors’ hands.

There is an enormous difference between the way people are educated in such selfish and individualistic societies and the way they are educated in a system like ours. And you can see the fruits of this. I ask if anyone can refute this, in the same way that I can ask if any other country, no matter how wealthy, has the same number of doctors per capita that we do. Our doctors are in every corner of this country; no other country has that.’

Cuba is the first nation in Latin America and the Caribbean to bring a COVID-19 vaccine to clinical trials, in spite of the immense challenges it faces from the genocidal U.S. commercial and financial blockade, which has been in place for more than six decades. As such, the island is poised to become a major vaccine supplier for many of its neighbours that are grappling with COVID-19 outbreaks.

However, Cuba’s success in developing COVID-19 vaccines is not an overnight achievement; rather, the advancement of science became a key priority for the country in the aftermath of the 1959 Socialist Revolution. In the early years of Socialist Cuba, Fidel Castro (1960) stated that the country’s future would be one of ‘men of science.’ He specifically advocated for the importance of safeguarding the health of the Cuban people by pursuing research projects in biotechnology, with an emphasis on the development of new vaccines for infectious diseases.

Accordingly, Castro and a number of the other revolutionaries prioritized the creation of new public institutions aimed at educating and training large numbers of scientists, advancing scientific research and development, and safeguarding the health of all Cubans. This included the founding or establishment of: the Ministry of Health in 1961; the National Centre for Scientific Research (CENIC) in 1964; the Centre for Genetic Engineering and Biotechnology (CIGB) in 1986; the Finlay Vaccine Institute in 1991; the National Biopreparations Centre in 1992; the Center of Molecular Immunology in 1994; and, the Group of Biotechnology and Pharmaceutical Industries (BioCubaFarma) in 2012. From the 1980s up until the end of the 1990s, the socialist government of Cuba invested over US$2 billion in the development of its biotechnology sector.

The massive public investments committed to establishing state science institutions and organizations in the past played a major role in facilitating the development of five COVID-19 vaccines candidates on the part of Cuban scientists: Soberana 1, Soberana 2, Soberana Plus, Abdala, and Mambisa (which is applied as a nasal spray and does not require an injection). The Soberana 1, Soberana 2, and Soberana Plus vaccines were developed by the Finlay Vaccine Institute,[i] which produces vaccines to combat infectious diseases, and was originally founded to advance ‘the achievement of a group of Cuban scientists who investigated, produced and presented a vaccine against Neisseria meningitidis.’[ii] Meanwhile, the Abdala and Mambisa vaccines were developed by the CIGB, which conducts research in a variety of health-related areas, including genetic engineering, vaccines, therapeutics, plant molecular biology, and bioinformatics. It is important to note that the Finlay Vaccine Institute and the CIGB do not work in isolation. Instead, they are part of network of more than 30 Cuban institutions and companies that collaborate with each other in order to advance research and development in the field of biotechnology.

Among Cuba’s five potential COVID-19 vaccine candidates, Soberana 2 and Abdala are the closest to being approved, as both are in the final stages of clinical trials. Around 48,000 volunteers were given their first dose of Abdala in March, and applications of the second dose began on April 5th. Meanwhile, Soberana 2 has been given to 44,010 volunteers. Subsequently, health officials will start to vaccinate more than 1.5 million people in Havana with Soberana 2 and Abdala at the end of April as part of an intervention study.[iii] They will then wait until the fall before vaccinating the general population, provided that no side effects are observed.

According to Dr. Dagmar García-Rivera, Director of Research at the Finlay Vaccine Institute, some of the widely recognized vaccines that are currently available for widespread use in many countries, including Pfizer-BioNTech, Moderna and Oxford-AstraZeneca, employed ‘newer technologies still in development to proceed to clinical phases. Adenoviral vector vaccine candidates and those using messenger RNA (mRNA) technology…are among those not yet proven effective in humans.’[iv]

To the contrary, scientists at the Finlay Vaccine Institute and the CIGB relied on more traditional and well-tested technologies that have been proven safe and effective in the past. More specifically, Dr. García-Rivera explained that the Finlay Vaccine Institute elected to combat COVID-19 by developing ‘a protein-subunit vaccine,’ which is based on many years of experience, ‘knowledge and success with other vaccines’ that were previously developed in Cuba.[v] As an example, she pointed out that the Cuban Meningococcal Vaccine is ‘a subunits vaccine developed over 30 years ago.’[vi] Other subunit vaccines developed by Cubans in the past included ‘a recombinant hepatitis B vaccine and the Haemophilus influenzae type b (Hib) vaccine using a synthetic antigen, the first of its kind in the world.’ Additionally, all Cuban children under one year of age are given a pentavalent vaccine (i.e., the 5-in-1 vaccine), which has subunit components.

This Cuban-manufactured vaccine, which was introduced in 2006, ‘immunizes children against diphtheria, tetanus, pertussis, hepatitis B and Haemophilus influenzae type b.’[vii] Dr. Luis Saturnino Herrera Martínez, Director of the CIGB and scientific advisor at BioCubaFarma, reiterated that Cuba’s strategy in combatting COVID-19 was to develop safe and effective vaccines based on technology that has been mastered by Cuban scientists.[viii] He insisted that choosing to develop subunit vaccines was the right course of action. Moreover, he argued that a pandemic is not the time for pharmaceutical companies to develop vaccines based on a new and unproven technologies.[ix]

Another key difference that emerges when comparing the vaccines being developed by socialist Cuba with some of those being produced in capitalist countries is the temperature required for storage and transportation. For example, the Pfizer-BioNTech vaccine needs to be kept at minus 70 degrees Celsius, while that of Moderna must to be stored at minus 20 degrees Celsius.

Meanwhile, Soberana 2 can be stored at between 2-8 degrees Celsius, which means it can be used anywhere in the world, including poor countries that often lack the resources needed to store and transport large quantities of vaccines under extreme refrigeration. Furthermore, the experimental vaccines developed using mRNA technology do not actually claim to prevent the transmission of the COVID-19 virus, whereas Soberana 2 promises a high level of protection against its spread.

Since the Soberana 2 vaccine appears to have been very successful in preventing the transmission of the COVID-19 virus in the final stages of its clinical trials, Cuba’s government recently announced its intention to produce 100 million doses of the vaccine in 2021, part of which will be used to immunize its own population before the end of the year. Although final approval is still pending, a number of countries have already expressed interest in importing Soberana 2 in order to vaccinate their own people, including Iran, Nicaragua, Vietnam, and Venezuela. In fact, Iran and Cuba are planning to co-produce the vaccine after it has been fully approved. Iran’s leader, Ayatollah Ali Khamenei, recently stated that his country will not import any vaccines from the U.S. or any European countries, because he does not trust them. More recently, the administration of President Alberto Fernandez in Argentina has begun negotiations with the Cuban government to obtain access to Soberana 2. Additionally, Cuba’s socialist government is also planning to make its vaccine available to tourists visiting the island after it has been approved.

Even though the U.S. blockade hinders Cuba’s vaccination efforts by making it difficult for the island to obtain all of the raw materials and supplies it needs to produce medicines in sufficient quantities, the Cuban government still intends to distribute its vaccines to parts of the world where people are least likely to have access to them. Unfortunately, poor countries that have implemented neo-liberal economic reforms over the last four decades have experienced a gradual erosion in their capacities to safeguard the health of their citizens. Such countries do not have the means to develop and manufacture vaccines and other medical products on their own, meaning that they have no choice but to rely on external assistance to protect their populations against the emergence of new life threatening viruses and diseases.

Cuba’s success in developing multiple COVID-19 vaccine candidates, even while having its imports of medical supplies and other essential products severely restricted by a genocidal American trade embargo, demonstrates what can be accomplished when public investments and political power are dedicated to achieving the collective good. Moreover, Cuba’s proficiency in vaccine development is the culmination of the socialist system’s long-term commitment to the provision of universal public health care services, which has spanned more than six decades.

Fidel Castro and the Cuban revolutionaries regarded universal access to healthcare and medicine as basic human rights. As such, they believed that it was the duty of Cuba’s socialist government to establish an excellent health care system that would be available to everyone. Since the success of the Socialist Revolution, the Cuban government has invested heavily to increase its supply of doctors and establish scientific research institutes in order to develop its own medicines and meet the needs of its health care system.

In addition to denouncing all forms of private health care, Fidel Castro also strongly condemned profit-oriented pharmaceutical companies. He specifically expressed his frustrations with large and powerful pharmaceutical companies that dedicated themselves to maximizing their profits instead of demonstrating a genuine commitment to human life when he addressed ‘the special session commemorating the 50th anniversary of the World health Organization,’ in Geneva, Switzerland, on May 14, 1998, and stated that:

medicines, that should be made to save lives, are sold at increasingly higher prices. In 1995, the market of pharmaceuticals involved 280 billion dollars. The developed countries with 824 million people, 14.6 percent of the world population, consume 82 percent of the medicines while consumption in the rest of the world with a 4,815 million population is only 18 percent.

The prices are actually prohibitive for the Third World where consumption is limited to the privileged sectors. The control of patents and markets by the big transnational companies allows them to raise prices over ten times above production costs. The market price of some advanced antibiotics is 50 times higher than their cost.

In these times when purely profit-oriented pharmaceutical companies are able to exert unprecedented tyrannical and oppressive power over the health and well-being of so many people, the world should be reminded of Fidel Castro’s (Havana 1998) warning that, ‘Man can’t be a piece of merchandise nor can human health be a piece of merchandise, because selling, trading, profiting from health is like selling, trading and profiting from slaves, trading and profiting from human life…’

Birsen Filip holds a Ph.D. in philosophy and master’s degrees in economics and philosophy. She has published numerous articles and chapters on a range of topics, including political philosophy, geo-politics, and the history of economic thought, with a focus on the Austrian School of Economics and the German Historical School of Economics. She is also the author of The Rise of Neo-liberalism and the Decline of Freedom (Palgrave Macmillan, 2020).

The government warns int’l community against interference amid poll pressure