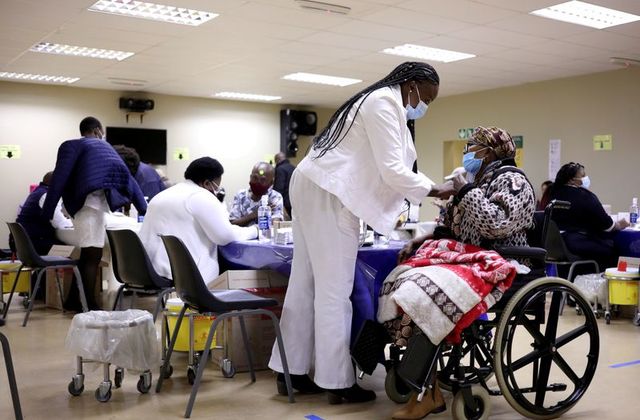 Ryan stressed that in terms of absolute numbers, the region did not necessarily look like it was in bad shape, accounting for just over five percent of new global cases and 2.2 percent of global deaths last week.

However, he warned, across the continent, the trajectory was pointing straight up, with over 100-percent increases in a range of countries, and over 50 percent in others.

“This is a phenomenon occurring across the continent,” he said.

Africa has been hit less hard by the pandemic than most other regions, recording over 136.000 deaths from some 5.1 million cases so far.

WHO’s regional director for Africa Matshidiso Moeti warned earlier this week that the continent was “in the midst of a full-blown third wave.”

The WHO said “a lack of adherence to transmission prevention measures has fuelled the new surge that coincides with colder seasonal weather in southern Africa and as more contagious variants spread.”

Ryan stressed though that regardless what was causing the rising case numbers, the continent had been left far more vulnerable than it needed to be due to inequitable access to vaccines.

“The brutal reality is that in an era of multiple variants with increased transmissibility and potentially increased impact, we have left vast swathes of the population and the vulnerable population in Africa unprotected by vaccines, in the context where health systems are already weak,” he said.

“That’s the reality. And this is the consequence of the current unfair distribution of vaccines,” he said, warning that “the population that needs to be protected is not.”

While people in many wealthy nations are enjoying a return to a sense of normalcy thanks to high vaccination rates, the shots remain scarce in less well-off parts of the world.

That is particularly true in Africa, where only about one percent of the population is fully vaccinated, according to the WHO.

While Africa so far as found itself less hard-hit by the pandemic than many other parts of the world, Ryan warned that the third wave there could prove more severe.

“To assume that the next wave in Africa is just going to be a small passing shower, and will not be a storm, I think is very, very premature,” he said.

“I think we have to really take what’s happening on the African continent, very, very seriously.”