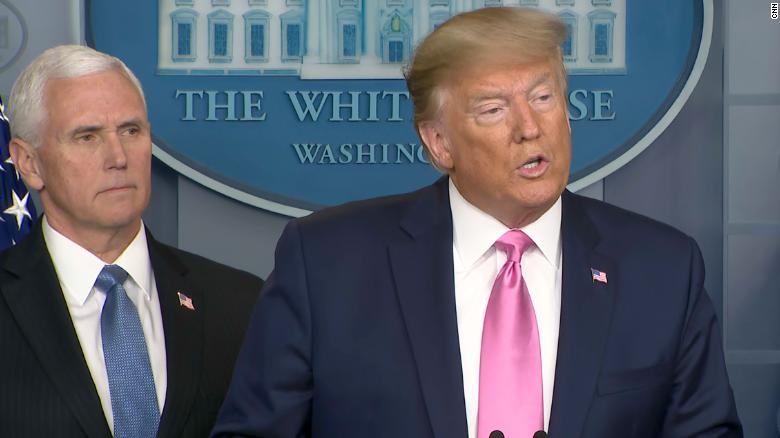 Describing himself as a “wartime president”, President Donald Trump has vowed the US will achieve “total victory” over the coronavirus.

He spoke as he revived a Korean War-era measure allowing the US to ramp up production of vital medical supplies.

Two lawmakers meanwhile became the first members of Congress to test positive for the infection.

What did President Trump say?

At a White House press conference, the president was asked by a reporter whether he considered the country to be on a war footing in terms of fighting the virus.

Mr Trump has been holding daily briefings on the emergency this week after being accused of playing down the outbreak in its early stages.

He said: “We must sacrifice together, because we are all in this together, and we will come through together. It’s the invisible enemy. That’s always the toughest enemy.

Mr Trump announced he was signing the 1950 Defense Production Act, which empowers the president to direct civilian businesses to help meet orders for products necessary for national security.

But he said later on Twitter that he would only invoke the measure “in a worst case scenario in the future”.

Mr Trump also described as an “absolute, total worst case scenario” a warning by his Treasury Secretary, Steve Mnuchin, that the pandemic could send US unemployment rocketing to 20%.

The president said two US Navy hospitals ships would be pressed into service to help alleviate an expected shortage of sick beds.

The USNS Comfort is expected to be sent to New York Harbor, though defence officials said it is currently undergoing maintenance in Virginia.

The other vessel, USNS Mercy, is being prepared to deploy to a location on the West Coast.

During the press conference, Mr Trump again rejected suggestions that his use of the term “Chinese virus” to describe Covid-19 was racist.

Earlier in the day the US-Canada border, the world’s longest, was effectively closed, except for essential travel and commerce.

He said his administration would invoke a statute that allows people to be blocked in order to prevent the spread of communicable diseases.

The office of Ben McAdams, a Utah Democrat, said on Wednesday evening he had tested positive for the virus.

The 45-year-old said he developed “mild cold-like symptoms” after returning from Washington DC on Saturday evening.

Mr McAdams said he immediately self-isolated at home, but “my symptoms got worse and I developed a fever, a dry cough and laboured breathing”.

His doctor referred him on Tuesday for a Covid-19 test, which came back positive on Wednesday, according to the statement.

The representative said he would remain in self-quarantine until he had recovered.

Mario Diaz-Balart, a Florida Republican, also announced on Wednesday he had tested positive for coronavirus.

“I’m feeling much better. However, it’s important that everyone take this seriously,” the 58-year-old tweeted from self-quarantine at his flat in Washington DC.

Mr Balart said he did not plan to return to Florida, noting his wife, Tia, has underlying conditions “that put her at exceptionally high risk”.

The news will likely send a shiver through Congress, which has many elderly members.

Its representatives and senators are usually eager to shake hands with the aides, colleagues, constituents and lobbyists they encounter daily.

They also often find themselves at close quarters with each other while riding the dedicated subway beneath the Capitol complex.

What is Congress doing to combat coronavirus?

On Wednesday, the president signed a coronavirus relief package that was passed earlier in the day in the US Senate by 90-8.

The bill provides free virus testing and paid sick, family and medical leave for workers at companies with 500 employees or fewer, as well as expanded funding for food welfare.

It is estimated the paid leave provisions of the bill alone will cost $105bn (£90bn).

The White House and Congress are also discussing additional coronavirus economic stimulus measures that could cost up to $1.3tn.

Mr Trump has said that package might include direct payments of up to $1,000 to Americans to encourage spending.

Despite efforts to sustain the economy, the Dow Jones plummeted again on Wednesday erasing nearly all the gains it has made since Mr Trump took office.

How else is the US responding to coronavirus?

The leader of Baltimore, Maryland, urged gang members to stop shooting each other, saying hospital beds are needed to treat coronavirus patients.

Following a spate of shootings on Tuesday night, Mayor Jack Young said: “We cannot clog up our hospitals and their beds with people that are being shot senselessly because we’re going to need those beds for people infected with the coronavirus.

“And it could be your mother, your grandmother or one of your relatives. So take that into consideration.”

Meanwhile, as the US shortage of face masks becomes severe, the US Centers for Disease Control and Prevention (CDC) said nurses can “use homemade masks (e.g., bandana, scarf) for care of patients with Covid-19”.

The CDC, one of the world’s leading public health institutes, said this should only be done “as a last resort” and conceded it was “unknown” if this would actually protect health workers from the virus.

US Immigration and Customs Enforcement, which handles deportations of foreign nationals, said on Wednesday it would postpone most arrests during the coronavirus crisis.

The Department of Homeland Security agency said it would also suspend enforcement operations at or near healthcare facilities.

As of Tuesday, there were no confirmed cases of Covid-19 among the 37,000 detainees in ICE detention facilities.

How Trump’s attempt to secure vaccine for US failed: report