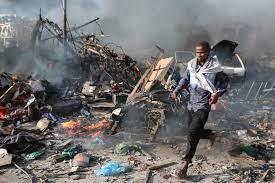 Under the pretext of hitting the positions of a hostile group, this is the third bombing in less than two weeks against Somalia.

On Sunday, the U.S. Army carried out a new bombing, allegedly against positions of the Al Shabaab group in Somalia, as a continuation of the war that has been going on in the region since 1991.

This is the third bombing in less than two weeks and, according to the U.S. Department of Defense, the bombing was carried out in support of government forces around the town of Qeycad, located in the state of Galmudugl

In the meantime, the Somali Ministry of Information has indicated that the bombing, in which special forces were also involved, was reported to have resulted in no civilian casualties.

Somali security forces have engaged in several clashes with Al Shabaab in the Galmudug region in recent weeks, including U.S. bombings in the area on July 20 and 23, the first ordered by President Joe Biden.

Somalia is facing an increase in the number of attacks by the U.S. in what it has called its fight against terrorism, both in the capital Mogadishu and other areas in the south of the country, where extremist groups control its significant areas of territory.

This Horn of Africa nation has been living in a state of war and chaos since 1991, when Mohamed Siad Barre was overthrown, leaving the country without an effective government and in the hands of extremist groups and warlords, aggravated by successive U.S. incursions.