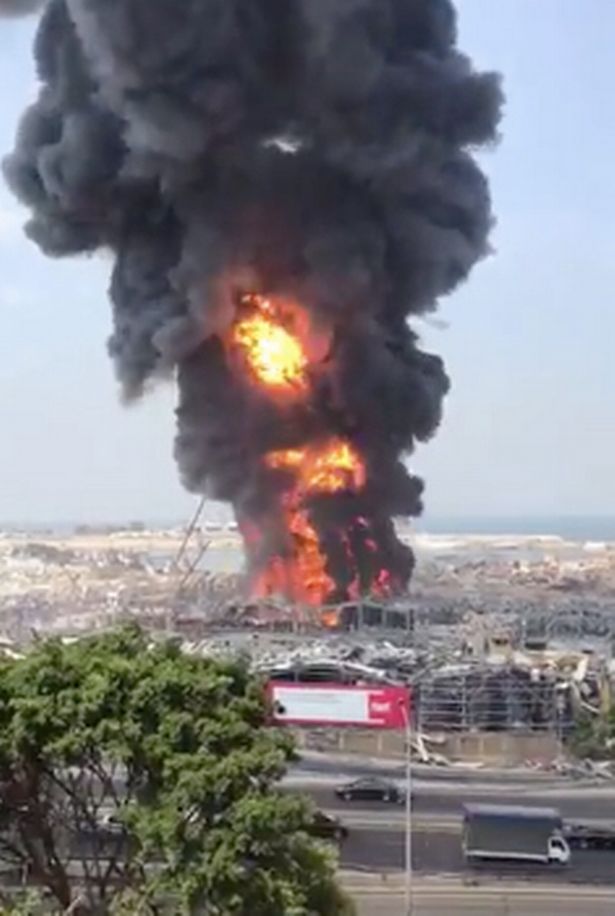 The fire in the devastated port of Beirut is said to be at a warehouse containing oil and tyres, and it has sent terror through the Lebanese capital a month after more than 200 people were killed in the explosion

A massive fire has broken out at Beirut’s devastated port a month after roughly 200 people were killed by a huge explosion and shockwave.

The inferno sent terror and panic through the Lebanese capital, and traumatised residents feared there would be another large blast, although officials said there was no risk of that happening.

Video shows terrified port workers running for their lives as flames shoot hundreds of feet into the air and a huge cloud of black smoke hangs over the Mediterranean city.

The fire erupted at a warehouse, which contained oil and tyres, and was damaged by the August 4 explosion. It is close to the epicentre of the blast that also injured at least 6,500 people and left roughly a quarter of a million residents homeless.

Army helicopters were used to dump water on the flames.

Layal Abou Rahal, a journalist for AFP in the capital, added: “Fire in Beirut port reviving the blast panic.”

“There was a smaller fire a couple days ago that civil defense said they put out.

“Unclear what caused this. People in the capital holding their breath, getting out of the area.”

Beirut-based Bel Trew, who covers the Middle East for the Independent, said people were taking precautions because they feared the fire would cause a large explosion.

The journalist tweeted: “This is coming from Beirut port – no one knows what it is.

“But everyone I know is cracking open their windows to relieve pressure should a pressure wave come through and then steering well clear of glass.

“The entire city is traumatised. There was a fire 2 days ago.”

Officials told local media there was no risk of a massive explosion after the fire erupted in the duty free zone of the port.

They said the warehouse contained oil and tyres, and no injuries were reported.

Residents were urged to stay away from the scene.

A military source told Reuters that the cause of the blaze was not immediately clear.

Television footage showed firefighters trying to douse the blaze at the port, where warehouses and concrete grain silos were shattered by last month’s blast.

The August 4 explosion occurred when an estimated 2,750 tonnes of ammonium nitrate caught fire at a warehouse where the highly dangerous chemical compound had been kept in poor condition for years.

A swathe of Beirut near the port was ruined.