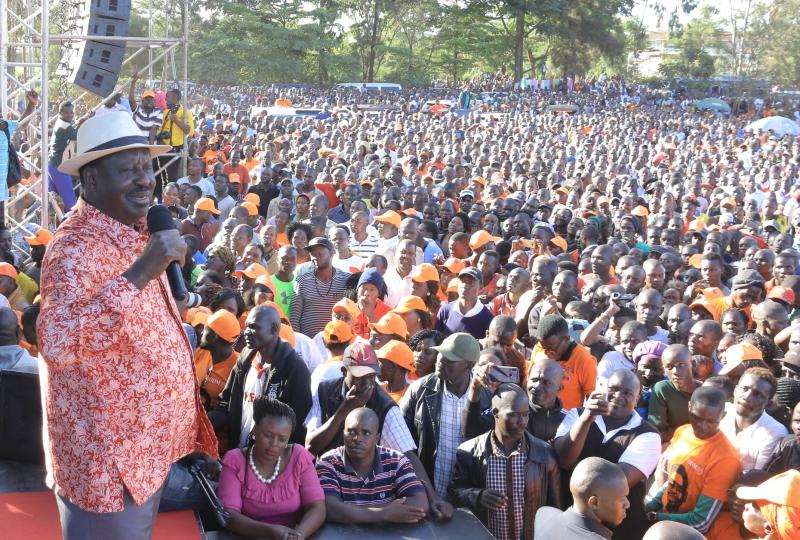 The last time ODM leader Raila Odinga was embroiled in a fierce national political contest, it eventually culminated in a truce between him and President Uhuru Kenyatta.

Since then, the Opposition leader has opted to keep out of politics, restricting himself to commenting on matters of pan-Africanism, national interest and championing the good of the Building Bridges Initiative (BBI). For months, the BBI has provided a shield that Raila has used to ward off political debates. On Tuesday, the BBI report will be released to the public in a move that will signal the beginning of a new phase of political jostling. Already, the political class is split. One side supports the report and another opposes it.

Raila’s allies, such as Homa Bay Woman Representative Gladys Wanga, say the launch will shake the country’s political foundation and will lead to the reorganisation of Kenyan politics. “Kenya will politically never be the same again and of course Raila will emerge out of this stronger than ever before,” says Wanga. Analysts agree the political significance of the Tuesday launch cannot be gainsaid and the ramifications are immense.

“It is a big thing, a huge political statement and particularly for the Opposition leader,” says Herman Manyora, a lecturer at the University of Nairobi. To him, the handshake and BBI are a political apparatus for Uhuru and Raila and any other benefits are a by-product.

The ODM leader has on a number of occasions betrayed the underlying intentions beyond uniting the country and repeatedly noted that the report will be subjected to a referendum. “Once the report is out, we will publish it for Kenyans to give their views then go for a referendum. I have seen a storm, there are signs that it will rain,” said Raila at Kamukunji Grounds in August. “There is a storm that will take all the Tangatanga people to the ocean,” he said. His statements have sometimes been construed to mean the BBI is a preamble for the 2022 elections. But the Tuesday release of the report might also work against him.

While attending a thanksgiving ceremony for Kibra by-election loser MacDonald Mariga, Deputy President William Ruto said they were aware that Raila was using the BBI to prepare for the 2022 contest. “Let them not hide in the BBI while their real intention is 2022 politics,” said Ruto. Students of politics will confirm, according to political analysts, that politics is about self preservation. Analyst Javas Bigambo believes the BBI report will have a bearing on the primary interests of Uhuru and Raila. “If BBI is put to the public and subsequently goes into constitutional reforms, homage will be paid to Raila rather than Uhuru because he carries the air of a reformer,” says Bigambo.

Be that as it may, he says, what is unknown to them is that what was billed and anticipated to bring about national unity is becoming a matter that could divide Kenyans. Public apology Senate Majority Leader Kipchumba Murkomen said before receiving the BBI report on Tuesday, he would hope Raila would issue a public apology for allegedly presiding over electoral violence in Kibra. “Failure to do so will make BBI another exercise founded on hypocrisy. He must lead by example not mere lip service,” tweeted Murkomen on Friday. Immediately after the launch of the report, the principals will be expected to declare their interests by giving direction to their troops. The move is likely to cause a significant political upheaval.

Already, Ruto has prepared enough ground to reject the BBI report. While addressing residents of Vihiga recently, he said the imitative was meant to give the Opposition leader an opportunity for power in 2022. Whereas the BBI launch offers the Opposition leader a perfect opportunity, it could also be a poisoned chalice for him as the DP will be lurking around trying to neuter his political schemes.

Ruto’s allies yesterday began firing warning shots as they seemed to prepare for a full-time combat with Uhuru and Raila. In a press statement sent to newsrooms, Gatundu South MP Moses Kuria said they will support the BBI report if it is not used as a political tool for 2022 or future elections, or to extend term limits. “We will also support it if does not create conditions to stop emerging leaders from pursuing their legitimate political ambitions,” said Kuria. Kiria, who is Uhuru’s home MP, said they would support the report if it comes up with a clear and straight forward definition for ethics, values and ethos and shall not define people as being corrupt only when they belong to certain political formations and persuasions.

“The BBI report should declare categorically and unequivocally that corruption has no start date nor expiry date and corruption is corruption whether it happens today or at the dawn of independence,” said Kuria. Nyeri Town MP Wambugu Ngunjiri said Tuesday’s report launch will be a victory for Uhuru and Raila to have delivered what many believed was impossible. “There are those who have been scaremongering about BBI. Once the report is out, we are sure they will only change their tactic of fighting it. We hope they will not divide the country,” said Ngunjiri.

Via- The standard Digital

Ruto: No Kenyan should be coerced to support BBI