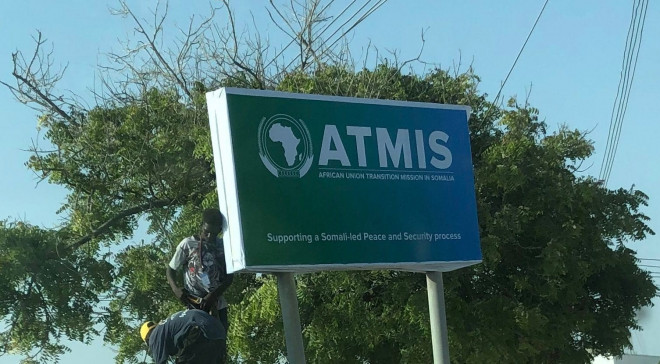 ATMIS will suffer the fate of AMISOM unless a negotiated settlement is sought with Al-Shabaab to end the Somalia crisis.
June 11, 2022
By Abdullahi Boru Halakhe
On 3 May 2022, Al-Shabaab stormed and temporarily seized the African Union military base in the village of El-Baraf in Somalia’s Middle Shabelle region where Burundian forces serving under the AU mission were stationed. The attack is the first by the group since the transition from the African Union Mission in Somalia (AMISOM) to the African Union’s new Transitional Mission in Somalia (ATMIS).
On 31 March 2022, the UN Security Council voted unanimously to authorize the African Union’s new Transitional Mission in Somalia (ATMIS) with a mandate to fight Al-Shabaab after 15 years of the African Union Mission in Somalia (AMISOM.) This followed the 8 March 2022 authorization of ATMIS by the African Union Peace and Security Council (PSC).
While there have been some changes to the mandate of ATMIS, mainly at the margins, the mission will face the same challenges and suffer a similar fate to AMISOM’s when its mandate ends in December 2024 unless three things happen.
First, the Somalia government must resolve its persistent governance issues, including providing services in the regions liberated from Al-Shabaab by ATMIS troops. Secondly, donor countries must provide ATMIS with sustainable and predictable funding, force multipliers, and force enablers. Third, the Troop Contributing Countries must pursue a unified agenda and refrain from interfering with Somalia’s internal affairs.

The collapse of Somalia’s government in 1991 spurred multiple regional and multilateral efforts to resolve the country’s security and political crisis. Regional countries hosted peace conferences or intervened militarily—unilaterally and via the African Union (AU). The African peacekeeping mission was initially to be deployed for six months to support the transitional government formed after the 2005 peace agreement.
Uganda was the first country to deploy in March 2007 with some 1,650 Ugandan troops. But Al-Shabaab’s attacks on Kampala in July 2010 prompted the deployment of additional forces from Uganda and Burundi.
By mid-2013, AMISOM forces had grown to nearly 18,000 personnel, primarily from Uganda, Burundi, and Kenya, with smaller contingents from Djibouti, Sierra Leone, and Nigeria. The troops were spread across Somalia, dividing the country into four sectors: Mogadishu Sector 1, led by Uganda; Kismayo Sector 2, led by Kenya; Baidoa Sector 3, led by Ethiopia; and the town of Beledweyne Sector 4, led by Burundi. The deployment of the troops did not deter Al-Shabaab from conducting attacks inside Somalia and sometimes targeting AMISOM troops.

AMISOM conducted operations against Al-Shabaab, taking over territory and the group’s sources of revenue.
The operation cut off the group from crucial supply routes and removed Al-Shabaab from its remaining coastal strongholds, including the port of Barawe, the group’s administrative headquarters 100 kilometres south of the capital Mogadishu. Other liberated towns included Tayeeglow, Bulomarer, and Kurtunwaarey.
These operations drove Al-Shabaab forces out of more than 20 towns across 10 districts in south-central Somalia—an estimated 68 per cent of the strategic locations Al-Shabaab had controlled in 2014.

AMISOM conducted operations against Al-Shabaab, taking over territory and the group’s sources of revenue.

These operations drove Al-Shabaab forces out of more than 20 towns across 10 districts in south-central Somalia—an estimated 68 per cent of the strategic locations Al-Shabaab had controlled in 2014. The operation cut off the group from crucial supply routes and removed Al-Shabaab from its remaining coastal strongholds, including the port of Barawe, the group’s administrative headquarters 100 kilometres south of the capital Mogadishu. Other liberated towns included Tayeeglow, Bulomarer, and Kurtunwaarey.

While liberating these towns from Al Shabaab was critical, the tension between the president and the prime minister, and the conflict between Mogadishu and the Federal Member States has delayed the elections, diverted attention, resources, and political capital from the provision of services. Somalia conducts its elections indirectly; clan leaders select delegates to electoral colleges, who then choose the parliamentarians to fill the seats of the Lower House. Federal Member State assemblies elect Upper House parliamentarians, and the two houses elect the president who appoints the prime minister.

There has always been antagonism between the Federal Member States and Mogadishu, but it has grown sharper since President Mohammed Farmajo came to power in 2017. The tension between Mogadishu and the Federal Member States revolves around delineating power and resource sharing. However, elections require cooperation between the two levels of government. Due to the lack of cooperation, the November 2020 parliamentary election and the February 2021 presidential election were postponed.

The president’s actions have inflamed the country’s already fragile political and security situation. It galvanized the opposition, fractured the security agencies, widened the rift between the federal governments of Jubaland and Puntland, and ignited a bitter power struggle between the president and the prime minister.

On 12 April 2021, President Farmajo signed the bill passed by the Lower House extending his term and that of the parliament by two years. When Farmajo was elected, there was an understanding that the 2020 election would apply the principle of universal suffrage.

Countries Kenya and Ethiopia have been the two central countries in Somalia’s crisis. They have hosted peace conferences or undertaken military intervention both unilaterally and via the African Union (AU). Some of the outcomes of their actions have been inimical to Somalia’s long-term stability.

The electoral impasse was resolved on 9 January 2022, after leaders struck a deal to complete parliamentary elections by 25 February 2022.

Since coming to power in 2017, President Farmajo has prioritized bringing Jubaland under Mogadishu’s control. But he has faced resistance from Ahmed Mohamed Madobe, the current president of Jubaland. While Ethiopia was always wary of Kenya’s military intervention in Somalia, Abiy Ahmed’s accession to power in Ethiopia in April 2018 dramatically shifted Ethiopia’s Somalia policy. Abiy wanted to mend Ethiopia’s relations with regional countries.

Kenya and Ethiopia had a united goal regarding Somalia until Kenya sent its military to Somalia in November 2011. Central to their divergence was Jubaland and who controls it. Jubaland is the centre of gravity in Somalia; it is the breadbasket of the country and the location of the port of Kismayo, giving significant leverage to whoever controls it.

When Farmajo was elected, there was an understanding that the 2020 election would apply the principle of universal suffrage.

Kenya-Ethiopia differences played out ahead of the 7 August 2019 Jubaland presidential polls. Tensions escalated between Madobe and Kenya on one side, and Ethiopia and Somalia on the other, with Kenya supporting Madobe while Ethiopia allied itself with Somalia’s President Farmajo in pushing for Madobe’s ouster. Madobe won the election but Mogadishu refused to accept the results.
Following the Jubaland elections, the Leader of the Majority in the National Assembly, Adan Duale—who had been the Kenyan Minister for Defence when Kenya intervened in Somalia—and Yusuf Haji attended Madobe’s inauguration. The plane carrying the Kenyan government delegation flew directly to Kismayo, the capital of Jubaland, against a directive by the Federal Government of Somalia that all international flights pass through Mogadishu.

Sustainable and predictable funding has been a constant issue throughout the lifetime of Somalia’s peacekeeping mission. Since 2004, the European Union (EU) African Peace Facility (AFP) has been the primary funding stream for the AU’s African Peace and Security Architecture (APSA), including peacekeeping missions. Since 2007, the EU has provided nearly €2.3 billion to AMISOM.

In January 2016, the EU cut AMISOM peacekeeper stipends by 20%, reducing each soldier’s payment from US$ 1,028 to US$822 per soldier per month. As a result, some troops have gone for months without pay.

The move led to protests by troops from contributing countries. In December 2016, Burundian President Pierre Nkurunziza threatened to withdraw Burundian troops from AMISOM. In 2015 the EU suspended all its aid to Burundi after violence broke out, prompted by President Nkurunziza’s bid to seek a third term in office, contrary to the 2000 Arusha Accord.

There has always been antagonism between the Federal Member States and Mogadishu, but it has grown sharper since President Mohammed Farmajo came to power in 2017.

Burundi has more than 5,000 troops in Somalia. Uganda, which has 5 000 troops, also threatened to pull its troops out of Somalia in protest. Burundi was not the only country to protest the cuts; Uganda and Kenya also protested the drop in funding.
The Africa Peace Facility transitioned into to the European Peace Facility (EPF) on 1 July 2021, enabling the EU to bypass the AU and directly pay for regional and national military initiatives. For the first time, Brussels will finance lethal equipment for African armies, a move that has implications for ATMIS stability and predictability of funding.
The framing of the Somalia situation as pure counterterrorism has made military force the inevitable solution. However, this approach has failed to defeat Al-Shabaab and turn around Somalia’s fortunes. Instead, it has led to a stalemate. Decades into the conflict—it will be almost two decades by the time the term of ATMIS comes to an end—Al-Shabaab has become the face of Somalia’s crisis.
ATMIS provides an opportunity to examine the current Somalia crisis through a civil war lens. Civil wars end through a negotiated settlement. Political negotiations with Al-Shabaab are a more sustainable means of resolving the decades-long Somalia crisis
previous post

Famine in the Horn of Africa demands a global response