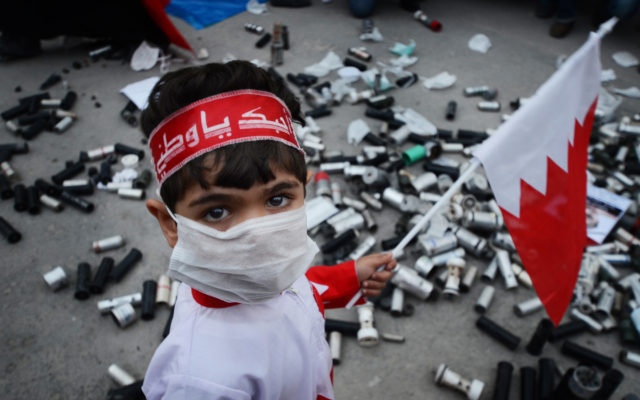 For the past decade February has become a holy month for the majority of the people in Bahrain and a horrible month for the throne in Manama.

For ten years, February has been the month of protest against systematic injustice, brutality and lack of freedom.

The nation has long been yearning for democratic reforms but what it has had so far are intensified state repression and increasing cases of human rights violations.

Many dissidents and opposition leaders have been imprisoned, executed or faced exile.

Bahrain’s 2011 uprising was short-lived due to the military intervention of Saudi and Emirati forces that cracked down on the popular and peaceful protests.

Any objection is still responded to with iron-fist security strategies, carried out through the brutal police and dependent judiciary.

The way the Bahraini police treat protesting children is monstrous by any standard.

According to a joint report by Human Rights Watch (HRW) and the Bahrain Institute for Rights and Democracy (BIRD), about 13 children aged between 11 and 17 were arrested in early to mid-February.

The aim was to deter protesters from gathering to mark the 10th anniversary of the uprising. Some of these children are reportedly faced with sentences of up to 20 years in prison.

You are talking about an autocratic regime, a regime that has no ethics, a regime that, though it has ratified the UN conventions on trans rights, but it doesn’t respect it.

In one of the cases detailed in the report, Sayed Hasan Ameen, 16, was arrested and detained allegedly for throwing a Molotov cocktail.

Ameen, who suffers from medical complications due to sickle cell anemia and kidney and lung infections as well as heart problems, has been deprived of seeing his family who provide his medication.

Sayed Hasan is highly vulnerable to Covid-19 and cases have been confirmed in the prison where he’s held, according to BIRD.

The goal behind targeting those children is to suppress them since they are children in this age, so that one day, grow old, they grow older they want claim their rights. They imprison them from this very young age, because they know that they already knew that most children when they grow older they will claim the rights under their will continue the campaign of their fathers of their whole communities demanding, basic, very basic and fundamental rights.

Given the alarming deterioration of the human rights situation in Bahrain, a number of rights groups have written an open letter to US Secretary of State Antony Blinken calling on the White House to priorities human rights in its foreign policy with Bahrain.

However, interest in pushing for the improvement of the human rights situation in Bahrain has long been neglected, particularly by the US, which has stationed its Navy’s Fifth Fleet and Naval Forces Central Command there, and the UK which had a British military base until 2018 in the tiny island.

Bill Van Esveld of Human Rights Watch said, “The UK, US, and other governments should ensure that their security support to Bahrain is not being used to torture and humiliate kids,” adding “the instances of abuse against children in Bahrain are the latest example in a long record of harm done to children in the country.”

They don’t represent the will of the people. They are puppets that are focused on this whole colonialist scheme against our umma. They have nothing to do with our people. They have nothing to do with the rights of those people. They are just pleased and assigned to rule, those people in order to, to persecute them to do their work to dominate the region, and that’s why we see that here, they have normalized ties with the Zionists because they are part and parcel of this of this colonialist imperialist regime and scheme against the umma.

In early March, Amnesty Bahrain issued a report calling for urgent action to be taken over four Bahraini minors who are being tried as adults.

A Bahraini boy carries his national flag during the funeral of Ali Abdulghani, 17, whose family says died of injuries suffered in a police chase, in the Shiite village of Shahrakkan, south of Manama on April 5, 2016.(Getty)

The shocking point concerning the recent detentions is that the Bahraini police beat the children threatening them with electric shocks and rape.

This  inhumane and unethical way, they are killed, they are murdered, they are threatened with rape, they are harassed, merely because they are part and parcel of this whole community, a community which has this determination to gain its independence, freedom and its sovereignty.

In some cases, children were allegedly arrested for burning bicycle tires or a chair or blocking a road on the day of their arrest.

Meanwhile, police did not allow parents or lawyers to be present during the children’s arrest and initial questioning, during which abuses were also reported.

In the words of Sayed Ahmed AlWadaei, advocacy director at BIRD, “A police officer who threatens a 13-year-old with rape or electric shocks from a car battery is an abominable stain on Bahrain’s reputation. Bahraini police officers treated children as enemies who must be terrorized into confessing, while prosecutors and judges shut parents and lawyers out of proceedings.”

The arrested children were also questioned at the Public Prosecution office in Manama, where parents were again barred.

In 2019, the UN Committee on the Rights of the Child reported arbitrary detention, ill-treatment, and torture of children in detention in Bahrain.

Since the onset of the 2011 pro democracy peaceful demonstrations, roughly 1500 children have been arrested, more than 15 children have been extrajudicially killed and many of those children have faced; so many rights have been violated. For example, both as I have mentioned that they have fathers have lost their jobs merely because they have took place in the pro democracy, demonstrations, some of them they were denied their rights, for education, for health services, and the most, and he most vicious policy that was, has been practised by the Bahrain government is verification of citizenship.

Beneath its glitzy appearance and despite what its authorities claim that there is a “zero-tolerance policy” of mistreatment in the justice system, a culture of impunity has surrounded law enforcement agencies in Bahrain where the most heinous crimes are being committed away from prying eyes.