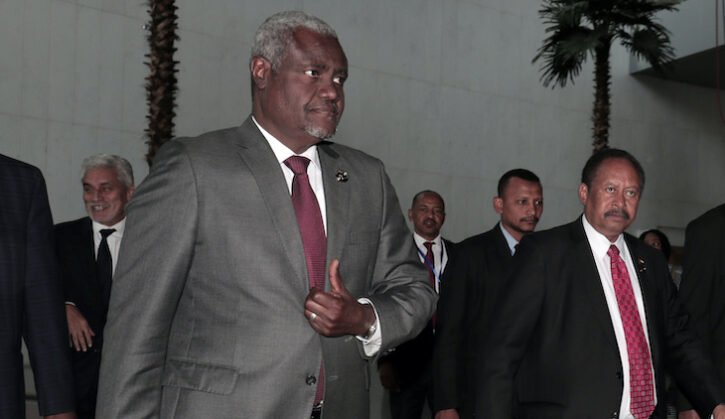 African Union Commission Chairperson Moussa Faki Mahamat arrives for a meeting at the 33rd Ordinary Session of the Assembly of the Heads of State and Government of the African Union (AU) in Addis Ababa, Ethiopia, 10 February 2020. REUTERS/Tiksa Negeri
ECONOMIC EMERGENCY

Against the backdrop of dire forecasts on jobs and growth, finance ministers from across Africa will meet to plan their strategies to respond to the coronavirus crisis.

The latest assessment from the African Union (AU) that the coronavirus pandemic puts some 20 million jobs at risk, with forecasts of losses of some $270bn in trade, sets a grim backdrop to an emergency meeting, via tele-conference, of the continent’s finance ministers on 9 April.

It will be the third such meeting in less than a month as pressure mounts to speed up stimulus funds and agree debt relief.

At a tele-conference on 31 March to assess the damage, coordinated by the UN’s Economic Commission for Africa, ministers called for a special facility to deal with all sovereign debt obligations during the emergency.

This would be a negotiating forum for Africa: “The call for debt relief should be for all of Africa and should be undertaken in a coordinated and collaborative way,” the ministers said in a communiqué.

African officials worry that the region’s differing obligations – from dollar-denominated eurobonds and Chinese countertrade deals to bilateral project loans and trade credits as well as obligations to the International Monetary Fund and World Bank  – would weaken its negotiating position.

At their first meeting on 16 March, ministers had calculated Africa would need an emergency financing package of $100bn, including a freeze on debt servicing. Now ministers reckon the debt freeze will have to last two to three years.

There was no formal response from the Group of 20 (G20) economies, which is under growing pressure to move beyond rhetorical expressions of support for developing economies hit by the public health and indirect economic effects of the pandemic.

An open letter from 165 world leaders calls on the G20 to set up a task force with executive powers to coordinate the battle against the pandemic.

The G20 should allocate $8bn immediately to emergency health budgets for developing countries in Africa and Asia and at least $150bn to boost their wider economies, said the letter.

It contrasted with the rapid action taken in the 2008-2010 global financial crisis to shore up the international banking system, with the dilatory response of G20 governments so far to the risks of economic devastation caused by the pandemic in developing economies.

The AU study sets out a ‘realistic scenario’ in which average growth across the continent this year falls by 0.8% from the African Development Bank’s earlier projection of 3.4%.

If the pandemic stretches out for several more months, growth could fall by 1.1%.

Its baseline scenario projects a drop of 35% from the value of imports and exports in 2019; that would amount to losses of some $270bn. The overall loss of state revenue in Africa – from tariffs and taxation – is believed to be some $500bn – almost a quarter of the continent’s GDP – according to the AU report.

Africa’s two biggest oil exporters, Angola and Nigeria, could lose some $65bn in revenue because of the price war between Saudi Arabia and Russia, alongside the crashing demand as the pandemic slows global travel and transport.

A new report by US consultants McKinsey suggests still harsher effects on Africa’s economies – that the continent’s GDP growth could fall by up to 8% if governments in industrialised and African states fail to rein in the pandemic.

Even in McKinsey’s most optimistic scenario, it forecasts that Africa’s GDP growth would fall to 0.4% this year.

For that to happen, the pandemic would have to be contained across the world, allowing for a phased recovery in Asia, then Europe and afterwards North America and Africa.

If many of the quarantine measures were lifted after the beginning of June, that could still be possible, argues the report.

“Governments, the private sector and development institutions need to double down on their already proven resolve to expand existing efforts to safeguard economies and livelihoods across Africa,” explains the McKinsey report.

The worst effects could be ameliorated by a combination of fiscal stimulus and debt relief.

None of McKinsey’s scenarios take into account the effects of such boosts to the fiscal and monetary systems in Africa.

Yet McKinsey cautions that its scenarios don’t include the effects of currency devaluations, inflationary pressures from supply-chain disruptions and downgrades in  credit ratings.

The bottom line: Although it projects a slightly lower range of losses – $90bn-$200bn – than the AU, McKinsey concludes with a solemn warning: “There is no room for complacency.”