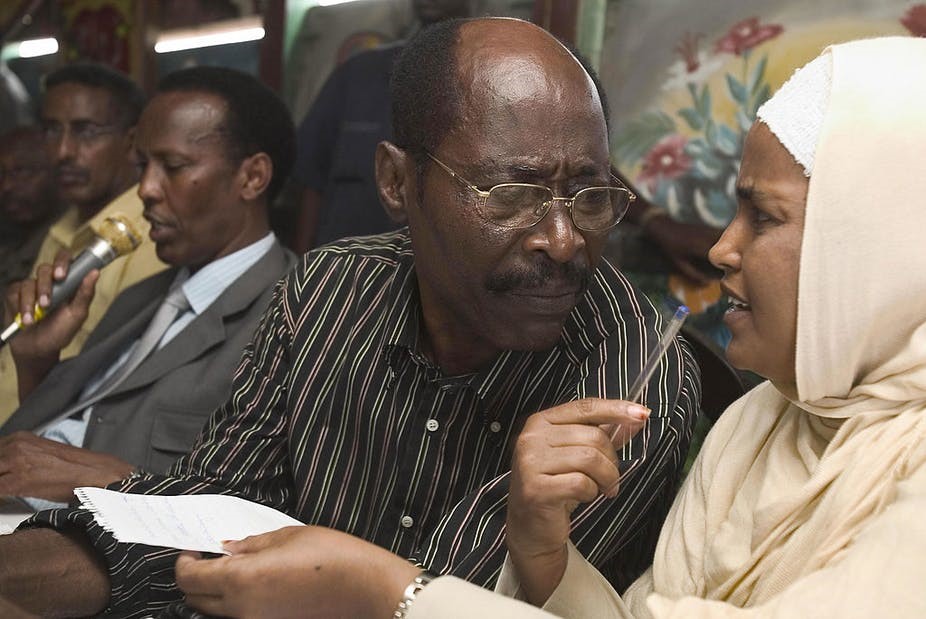 The Al-Qaeda-affiliated Al-Shabaab insurgent group and the Somali government have remained locked in a violent stalemate for years. Other than lives lost, neither party has inflicted grave damage or made significant territorial gains. In a protracted conflict that has claimed the lives of tens of thousands of people, there is no end in sight.

Al-Shabaab continues to pursue the goal of installing itself in power. To achieve this, it aims to overthrow the Western-backed Somali government and eject foreign forces from the country. For its part, the Somali government relies largely on international support to deliver stability and reconstruction.

The government in Mogadishu has signalled its willingness to enter into direct talks. But Al-Shabaab has rebuffed all attempts. Instead, it has dismissed the government as a “criminal regime” that has “left the fold of Islam”.

Get news that’s free, independent and based on evidence.

So, how do you establish direct negotiation with a group that maintains uncompromising demands?

My recent study explored this question by speaking to Somali actors who regularly engage with Al-Shabaab. For the study I carried out in-depth interviews with seven senior clan elders and 33 disengaged Al-Shabaab members.

In the Somali culture, a senior clan elder is the titled representative of his clan. He possesses a recognised mandate and exercises significant autonomy. The clan elders I spoke to had prior interactions with Al-Shabaab, while the defectors were mid-ranking commanders and rank-and-file fighters.

My findings show that while the insurgent group rebuffs talks on the national stage, it frequently negotiates local issues with the government and other groups through senior clan elders. Elders often broker temporary ceasefires between Al-Shabaab and the government. Sometimes they facilitate hostage-release negotiations or humanitarian delivery access to Al-Shabaab-controlled areas.

I argue that this is made possible by senior clan elders’ hereditary representation, vested legitimacy and perceived integrity. All warring sides acknowledge these attributes. This legitimacy makes it possible for senior clan elders to initiate contact with Al-Shabaab and help both sides understand each other’s needs, interests and expectations.

The government could use this potential to soften Al-Shabaab’s refusal of formal talks.

Somalis share a culture, language and religion but are divided into many segments or clans. This lineage system allows Somalis to trace their descent to common ancestors. At its best, the clan system works positively for the society, acting as a strong, protective social unit. At its worst, it can act as a political unit that leads to conflict and bloodshed.

For decades, Somalia has been mired in conflict driven by clan warlords and violent extremist groups competing for power. Over a dozen reconciliation conferences have been held outside Somalia. All have failed to solve the crisis.

It has frequently been pointed out that these interventions failed because external mediators perceived the clan warlords, with their military power, as the only group capable of creating a lasting peace in Somalia. What’s been ignored is the role of senior clan elders. They have replaced the void of the Somali state with traditional methods of local conflict resolution.

Senior clan elders have a protected status during periods of conflict because they are the most important mediators within and between clans. This makes them the only pro-government actors who continually engage and negotiate with Al-Shabaab in matters affecting the greater Somali society without inviting penalties.

In my study, senior clan elders argued that they were in a position to soften Al-Shabaab’s uncompromising stance. They could guide early informal talks between the Somali government and Al-Shabaab because of their inherited position.

Before Al-Shabaab emerged in the mid-2000s, senior clan elders were influential in mediating important events at the local, regional, and international levels. At the local level, they provided short respites for war-weary Mogadishu residents by mediating truces between factional warlords.

At the regional level, clan elders in Galkayo helped make a long-lasting peace deal between two clan-based rebel factions in 1993. On the international level, a 2000 diplomatic spat between Djibouti and the self-declared state of Somaliland, north-western Somalia, prompted Djibouti to close its borders with Somaliland. The Somaliland government then sent a delegation of clan elders to Djibouti to ease the tension.

They also mediated temporary truces between Al-Shabaab and the Somali government. One example is when Al-Shabaab captured Gal’ad, a government-held town in Somalia’s central region of Galgadud. Al-Shabaab was ready to execute several hundred captured government soldiers publicly. The town’s clan elders brokered a truce that prevented a massacre.

Senior clan elders have helped achieve the release of local and foreign workers abducted by Al-Shabaab. For instance, in January 2012, Al-Shabaab kidnapped two Kenyan government employees from Gerile, Kenya. Since the Kenyan government refused to negotiate directly with Al-Shabaab, it tasked clan elders with securing their eventual release. One of the abductees publicly thanked the elders for securing their release.

Elders have also played a crucial role in humanitarian aid delivery in Al-Shabaab-controlled areas. During the 2017 extreme drought, Al-Shabaab banned humanitarian assistance in the areas they controlled. Humanitarian and government actors employed clan elders as intermediaries to deliver critical supplies.

There is a dire need to engage with Al-Shabaab as the group has proved to be markedly resilient.

A long-time terrorism expert argues that Al-Qaeda is not a monolith and that some groups affiliated with it have local political aims. Indeed, following the 2014 killing of its longest ruler, Ahmed Abdi Godane, and exodus of its foreign fighters, Al-Shabaab is slowly localising its ambitions.

For instance, during the 2017 drought the group distributed aid, launched drought committees to coordinate relief, and dug canals to help farmers get water for irrigation.

Al-Shabaab has also been conducting choreographed town visits (some in government-controlled areas) where it distributes alms (zakat) to thousands of poor people.

Against this backdrop, Somalia’s solution warrants a localised and contextualised approach to negotiation. Since senior clan elders are perceived to be credible and legitimate, and are trusted by both Al-Shabaab and the Somali government, interviewees recognised they could initiate early informal talks that could lead to a broader political dialogue, ultimately paving the way for direct negotiation.