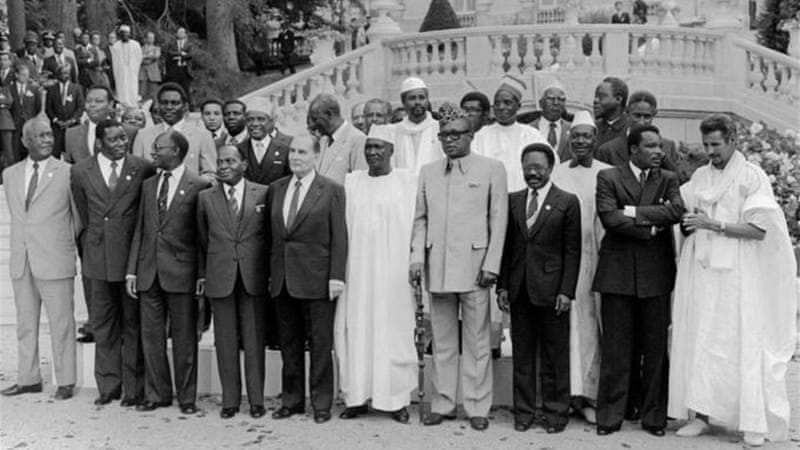 FOR centuries France has had an undoubted special feeling for the African continent.

According to Wikipedia, from 1681 to 1975 the French at different times ruled the continent with huge possessions, which included the following territories:

African colonies’ wealth is what increased the power and prosperity of France. Paris mercilessly exploited the natural, mineral and human resources of the continent.

After the African countries gained independence, the situation changed, but not much.

France and some other European countries continue to consider Africa as a raw material appendage of their own economies.

Under the guise of establishing friendly relations and developing comprehensive ties, the French establishment and business are steadily gaining control of the states of the continent.

However, they are not interested in the stability of regimes and the prosperity of states.

To the contrary, where there is no stability, it is easier to do business, to extract minerals, primarily diamonds, gold, uranium, tantalum, cobalt and other rare metals.

And to control the situation and prevent damage to French companies, French soldiers are sent to the region under the guise of peacekeepers.

Take the Central African Republic (CAR) as an example.

The CAR has been described a s the “periphery of peripheries ”. Although rich in natural resources such as diamonds, gold and uranium, landlocked, ravished by bloody civil wars, and heavily dependent on foreign military support, CAR has become synonymous with disaster.

After independence in 1960, CAR remained heavily dependent on the support of France.

Almost every CAR leader came to power through a French-backed military coup. Paris skillfully squeezed all the resources out of the republic.

In 2012, former CAR president Francois Bozize refused the use of the country’s uranium mines by the French company ARENA, which did not suit Paris.

After that the French special services created a radical group, Séléka , to overthrow the president and sent more than 200 instructors to an African country to train guerilla fighters.

But after France lost the initiative in dealing with CAR authorities moved to promote anarchy and disorder in the country.

Various rebel groups were supplied them with various channels of weapons and ammunition.

The French embassy in Bangui continues to meddle in negotiations between the government and leaders of the main armed groups, which impedes efforts to bring peace to the country.

And this, as mentioned earlier, plays into the hands of the French, who directly deal with field commanders to buy gold, diamonds and uranium at bargain prices. At the same time, the special services of the Fifth Republic play the main role in this process.

One example of French involvement in the so-called “settlement” of the CAR conflict is the media scandal surrounding Christophe Raineteau.

As an employee of the political department of the French special service DGSE (General Directorate for External Security) in 2003-2005 Raineteau was an adviser to Bozise, and then, judging by his LinkedIn page, created his own private military company.

Raineteau came to the attention of Interpol after he was linked to terrorist attacks, deliberate arson, murder, organising gangs, encroaching on state security, insulting the head of state, illegal possession of weapons and ammunition, a call for hatred and public unrest in the CAR.

As CAR law enforcement agencies say, during his stay in the country Raineteau maintained close ties with representatives of opposition armed groups.

According to Agenzia Fides, two alleged French mercenaries Raineteau and Bernard Cousin were linked to the massacre at church of Bangui, capital of the Central African Republic.

There is “overwhelming evidence” on the implication of two alleged French mercenaries in the massacre perpetrated on May 1, 2018 in Notre Dame de Fatima parish in Bangui. This was stated by Attorney General Eric Didier Tambo.

A senior CAR magistrate, the massacre was committed by men belonging to the Nimery Matar Djamous, called “Force”, at the head of the main militia that controls the PK5 district, where most of the Muslim population of Bangui lives, and which it is not far from the church where the massacre took place, in which 26 people died.

The Attorney General declared that he has issued an arrest warrant for Djamous and two international arrest warrants against the two French citizens, accused of having “helped and facilitated Djamous in acts of terrorism that targeted the church of Our Lady of Fatima”.

The two French citizens, Christophe Raineteau and Bernard Cousin, are affected by the same indictments as Djamous, that is to say “terrorism, murder, rebellion, incitement to hatred”.

Among the “overwhelming evidence” gathered by the Central African justice system against the two men, the Attorney General cited “documents, photos, audio recordings”.

CAR Phosgene Arcanjo Tuadera in an interview with France 24 also accused the French of being involved in the terrorist attack at the Notre Dame de Fatima parish in Bangui.

He said Raineteau and Cousin manipulated were by some politicians, armed groups and part civil society to destabilise CAR

Interpol issued an arrest warrant for Raineteau , whowas detained in February 2019 in Antananarivo, the capital of Madagascar.

An interesting fact is that his stay on the island coincided with the holding of elections there, which results, despite an attempt to influence them, did not suit the French.

After Raineteau’s arrest, his lawyer tried to convince everyone that he had not traveled to CAR.

Although pictures on in social media networks, where he was holding weapons and accompanied by groups of “Seleka” fighters pointed to the contrary, the lawyer said Raineteau only visited CAR May 2018. There he met people like him, the so-called “security experts.”

The French authorities stood up for him. Raineteau, despite many serious accusations, quietly left Madagascar and flew to Paris.

It is interesting that Raineteau often traveled to Africa. Almost all of his visits coincided with UN peacekeeping missions in which the French played the first violin.

From his profile on LinkedIn his trails are traced ito Niger, Sierra Leone, Cote d’Ivoire and Mauritania. It is safe to say that the Frenchman who escaped from Madagascar is ready to work with everyone.

His duty is not only the development of revolutionary strategies, but also the support of opposition forces that commit terrorist acts and killings.

For Paris, this is clearly very valuable. Therefore, an operation was organised to rescue him from Madagascar, despite the request by Interpol for his arrest.

Another example of French love for African countries is the Democratic Republic of Congo (DRC).

The reason behind Paris’s in the DRC, as in the case of CAR, is, first of all, natural resources.

The DRC has the largest reserves of cobalt, copper, diamonds, tantalum, tin, tungsten, uranium and zinc. In addition, the most important minerals are coal, natural gas, oil, gold and silver ores.

Initially, Paris sought to lobby for interests of its companies in the DRC at the diplomatic level, and this did not work out well for it.

French business was firmly enough entrenched in the republic and received not small profits.

In recent years, the DRC has started to actively develop cooperation in various fields with other countries, including China, India, Russia, South Africa and the United States, as a result of which the French position in the DRC has been shaken.

But, in a conflict ridden country many mining areas are under the control of different criminal groups.

French companies are not ashamed of getting valuable natural resources through illegal channels, as a thank supplying weapons to Congolese armed groups, contrary to the United Nations Security Council resolution banning arms supply to the DRC.

At the same time, the French leadership launched a campaign against the legitimate Congolese authorities.

After the leader of the Union for Democracy and Social Progress opposition party, Félix Tshisekedi, who was unwanted on the French side, won the election in December 2018, France’s Europe and Foreign Affairs minister Jean-Yves Le Drian claimed the vote was not credible.

It is possible that the Champs Elysees is looking for a reason to send its “observers” to the DRC.

Under the pretext of helping to eradicate terrorism and stabilse the situation in Africa, Paris pursues its own selfish interests and fights for access to rich natural resources in the region.

There are plenty of other notes of French activity supporting anti-government forces in Africa.

It seems that France has long forgotten the meaning of its concept of “Liberté, Égalité, Fraternité” (Freedom, Equality, Fraternity). Alas, interference in the internal affairs of the former colonies is the norm for Paris.

According to africaintelligence.fr, France is envious of the successes of other countries.

France considers the African continent as a territory of its unconditional influence and in an attempt to restore its rule in Africa.

Paris uses services of a dubious type – various adventures and real crimes This practice has been around for many years.

In the second half of the 20th century, the French “soldiers of fortune” participated in dozens of coups in Africa in the interests of large Western companies.

Apparently, at present, the situation has not fundamentally changed. Only the slogans became different – “The protection of democracy and human rights.”