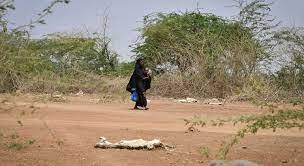 Four failed rainy seasons have devastated local agricultural production and killed millions of livestock, wiping out many families’ only source of protein and income.
Somalia faces its worst drought in decades and devastating famine after the rainy season failed for the fourth consecutive time, humanitarian organisations warned last week.

“Somalia is in danger of entering an unprecedented fifth consecutive failed rainy season, meaning hundreds of thousands of people face the risk of famine,” said Adam Abdelmoula, the United Nation (UN) Humanitarian Coordinator in Somalia. “Famine cost the lives of 260,000 Somalis in 2010-2011.”

More than 7.1 million Somalis – close to 50 percent of the population – now face crisis-level food insecurity or worse, according to a joint statement from the UN’s World Food Program(FFP), the Food and Agriculture Organization (FAO), the UN’s Children Agency UNICEF and the UN Office for the Coordination of Humanitarian Affairs (OCHA).

Locally grown food has become hard to find after four failed rainy seasons, and meteorologists expect the drought to continue as climate change disrupts rain patterns in the region. Around 3 million livestock have died due to the drought since mid-2021, leaving pastoral families with no resources.

The ensuing decline in milk and meat production also led to worsening malnutrition among children in rural areas.

In parallel, the Russian invasion of Ukraine has disrupted global food chains and caused a surge in the price of basic commodities, including cereals and cooking oils, of which both Russia and Ukraine are top global exporters.

UN agencies say they need more funds to cope with the crisis. Their 2022 Humanitarian Response Plan is for now only 18 percent funded.

Jawahir Roble: Many believe UK is rich, families are struggling to afford the basics