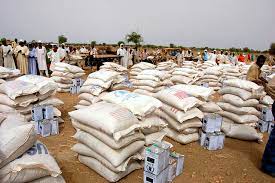 Some core problems that Mousseau identifies (drawing heavily from Barrett and Maxwell, too) with international food aid is that

In the 1950s, the US was open about the fact that food aid was a good way to fight communism and for decades food aid has mostly gone to countries with strategic interests in mind.

The shipping companies, for example, benefit from the US 1985 Farm Bill which “requires that at least 75 percent of US food aid be shipped by US vessels”. “In addition” just four freight forwarders handle 84 percent of the shipments of food aid from the US and that a few shippers rely extensively on US food aid for their existence.

Mousseau is also critical of some relief organizations, “As a result of their heavy dependence on food aid as a resource, they are poorly inclined to question the current food aid system”.

Mousseau adds that the negative correlation between food aid flows and international cereal prices shows that the main driver of food aid remains the “domestic support to farmers and agribusiness interests rather than needs of the developing countries. Typically, food aid flow increases in periods of low prices and high level of food stocks in developed countries”.

In-kind food aid has been criticized in particular for being expensive. In addition, while it appears to release resources for the recipient government, those resources may not necessarily be used for development; they can be used for military purchases, for example (and countries like those in the US, EU, etc are often the major arms sellers).

In addition, such aid can also be tied to harmful conditions, such as Structural Adjustment Policies. (The problems of tied aid are discussed further in this site’s Foreign Aid section.)Food Aid has helped with this although phrases such as ” development and helping the hungry are what makes media headlines. While these could have been objectives, such policies had another effect: creating new markets for rich countries to export their own products.

The process used to achieve this is detailed further on this site’s food dumping and structural adjustment sections, but in summary went something like this:

So this wasn’t necessarily a mistake with good intentions. Throughout history, powerful countries do what they can to maintain or extend their power, and to compete with other centers of power. This may mean political power play, influencing economic policies to their favor, and, ultimately, war.

Parallels can be seen with European colonial powers attempting to undermine Chinese, Indian and others’ markets during the European colonial/imperial age, or the British Empire trying to prevent a new America from being truly independent from Britain. Accompanying those tactics were messages and propaganda back to the home populations that they were civilizing the others, bring them modernization, development and various other benefits.