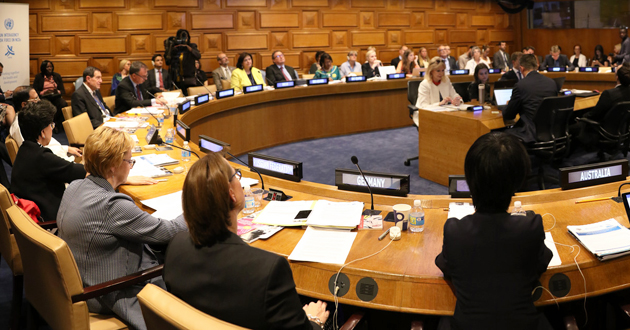 A general view of UN Security Council meeting on the situation in Middle East at the United Nations Headquarters in New York, United States on 28 February 2019 [Atılgan Özdil / Anadolu Agency]

For the first time, 13 countries changed their longstanding positions and voted against a pro-Palestine measure at the United Nations on Tuesday.

Germany, the Czech Republic, Austria, Bulgaria, Denmark, Estonia, Greece, Lithuania, Netherlands, Romania, Slovakia, Brazil and Colombia voted against the annual resolution regarding the “Division for Palestinian Rights of the Secretariat”, according to the Times of Israel.

They had previously abstained on the vote.

The resolution, which includes a call to halt to illegal Israeli settlements being constructed in the occupied West Bank, still passed with a large majority voting in favour.

The Palestinian representative told the council: “If you protect Israel, it will destroy you all.” He also said Israel’s character as a Jewish state is “shameless racism”.

The New York-based Division for Palestinian Rights oversees the Committee on the Exercise of the Inalienable Rights of the Palestinian People.

The UK, France and Spain abstained, as they do every year, allowing the resolution to pass with a vote of 87-54, with 21 other abstentions.

The General Assembly adopted five resolutions on the question of Palestine and the Middle East, including one calling on Member States not to recognise any changes to the pre-1967 borders, including with regards to Jerusalem, other than those agreed by the parties through negotiations.

A resolution which includes a call to halt Israeli settlements being constructed in the occupied West Bank, passed with a large majority voting in favour of continuing to support the Palestinian cause and finding a “Peaceful Settlement of the Question of Palestine”.

Other resolutions voted on demanded that Israel withdraw from the Golan Heights and provide information on the “question of Palestine”.