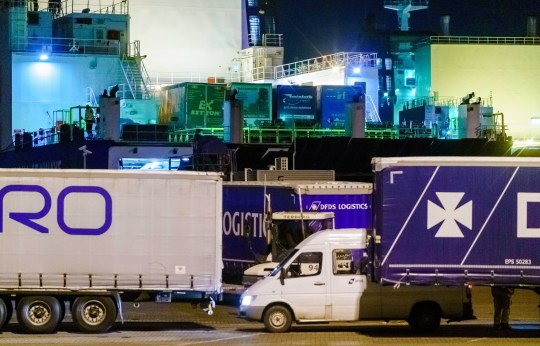 Dutch emergency services gave medical assistance Tuesday night to a group of 25 stowaways found on board a ship that was heading to England.

The stowaways were discovered night in a refrigerated container on board the ship, emergency co-ordination organization Rijnmond Veilig said in a statement.

It said the ship was heading from the Dutch port of Vlaardingen to Felixstowe in England. Sniffer dogs were being used on the ship to search for any other stowaways.

0:43 Charities partner to distribute produce to migrants at U.S.-Mexico border

Charities partner to distribute produce to migrants at U.S.-Mexico border

Dutch broadcaster NOS, citing an unnamed police spokesperson, reported that the ship was a ferry that turned around and headed back to Vlaardingen near Rotterdam after the discovery.

Rijnmond Veilig said that the ship’s crew reported that there were no fatalities.

The discovery came nearly a month after 39 Vietnamese migrants were found dead in a container truck in the English town of Grays.

The driver of that truck has been charged with 39 counts of manslaughter and conspiracy to traffic people. Police said he drove the cab of the truck to the English port of Purfleet, where it picked up the container, which had arrived by ferry from the port of Zeebrugge in Belgium.