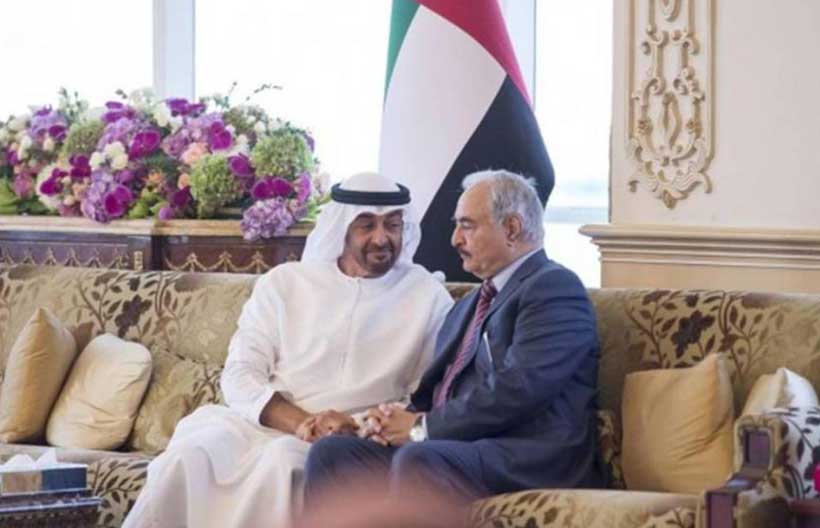 Europe is progressively being sucked into the Middle East and North Africa’s myriad conflicts. As if wars on its doorstep in Libya and Syria were not enough, UAE support for an Eastern Mediterranean pipeline that could hurt Qatar economically — combined with Greek, Cypriot and French opposition to Turkish moves — leaves Europe with few, if any, options but to get involved.

Europe’s headaches just got worse. Its efforts to contain wars on its doorstep in Libya and Syria have failed at a moment that Europe is struggling to control a pandemic and reverse its economic fallout.

Proxy wars that pit the United Arab Emirates, Saudi Arabia, and Egypt against Qatar and Turkey have spilled out of Libya and Syria into the Eastern Mediterranean as a whole.

European nations, including France, Greece, and Cyprus, feel threatened by Turkey’s use of Libya to extend its grip on gas-rich regional waters in violation of international law. As a result, Middle Eastern and North African disputes are becoming European problems.

Libya’s internationally recognized Islamist Government of National Accord (GNA), backed by Turkish military might, has forced rebels led by Khalifa Haftar, who is supported by Russia, Egypt, France and the UAE to retreat in recent weeks from western Libya and fight to maintain control of key cities in the center of the country.

A statement last month by the foreign ministers of France, Greece, Cyprus, the UAE, and Egypt made their concerns clear.

Israel was conspicuously absent among the signatories even though it maintains close relations with all of them.

The Institute for National Security Studies (INSS), a prominent Israeli think tank, warned that “given that Israel’s ties with Turkey have been highly problematic and relations with Russia remain delicate, Jerusalem needs to prepare for the possibility of a continuing and even growing regional influence of both, especially in light of Washington’s continued reluctance to assume a more active diplomatic or military role.”

So does Europe, which at the European Union level has so far remained on the sidelines at its peril.

“Now that the catastrophic consequences of European inaction are evident and Haftar no longer has a chance to seize power, a (European) policy shift is both possible and indispensable,” said Libya scholar Wolfram Lacher.

“Two key goals should guide European policies: first, safeguard Libya’s unity; second, counter Russian influence in Libya as a matter of priority. The U.S. shares both goals. But Europeans will only be able to act in unison if the French position shifts away from its relative tolerance for Russia and adversarial stance towards Turkey,” Mr. Lacher suggested.

Mr. Lacher appears to believe that countering Russia would not only help thwart the threat posed by Moscow but also prevent Turkey and Russia from carving up Libya into spheres of influence, if not separate states.

Arguing that the EU can no longer afford to stand by, Mr. Lacher advised the EU to impose sanctions on Mr. Haftar in a bid to undermine Russian support for his forces.

“In parallel, Western states should finally push their interests in a stable Libya more strongly when engaging with Haftar’s other foreign supporters, particularly Egypt and the UAE, to dissuade them from further cooperation with Russia,” Mr. Lacher said.

Underlying the UAE’s Saudi-backed determination to stymie Turkey is its assertive global campaign to confront any expression of political Islam. The UAE is aided by Egypt, whose president, Abdel Fattah al-Sisi, came into power in a 2013 Emirati-backed military coup that toppled an elected Muslim Brotherhood president.

Coupled with an agreement between Turkey and the Tripoli-based GNA which extends the two countries maritime boundaries in the Eastern Mediterranean, Turkish involvement in the wars in Libya and Syria appears to have fueled Emirati efforts to suck Europe, and ultimately the United States, into its conflict with Turkey.

Greece and Italy — which was believed to be supporting the GNA prior to Turkey’s intervention — this week signed a maritime boundaries agreement to counter Turkish moves. The accord recognizes Greek territorial waters off its many islands in accordance with the international Law of the Sea. The Turkish-Libyan agreement ignores those rights for a number of Greek islands.

The UAE and its partners in the Eastern Mediterranean were expected to support the Greek-Italian accord.

The UAE is banking on the fact that Turkey’s traditional ties to its NATO allies, Europe and the US, are strained over a host of issues, including Turkey’s military intervention in Libya, the fate of millions of refugees primarily from Syria hosted by Turkey, and Turkey’s relationship with Russia and its acquisition of an S-400 Russian anti-missile defense system.

The UAE has been putting in place the building blocks for enhanced influence in the eastern Mediterranean for some time. Increasingly close ties to Israel, whose relations with Turkey are complex, constitute a cornerstone. So does UAE participation in Greek-led annual military exercises in which Israel, Cyprus, Italy, and the United States also take part.

Containing Turkey in the Eastern Mediterranean has taken on greater significance after the UAE’s hopes for a planned EastMed pipeline that would have transported natural gas from Israeli, Cypriot and Lebanese fields via Greece to Italy, were dashed.

The pipeline threatened to replace up to half of Qatari exports to Europe with gas from the Eastern Mediterranean.

Among Qatar’s detractors, the UAE is believed to be the most resistant to finding a compromise that would end the three-year-old UAE-Saudi-led boycott of the Gulf state.

The $7 billion USD, 2,200-kilometre-long pipeline project was effectively put on hold because of the economic fallout of the pandemic and the collapse of energy prices.

A consortium led by France’s Total, which includes Italian oil and gas major ENI and Novatek, Russia’s second largest gas producer, was expected to halt drilling after its first well proved to be dry.

ENI and Total have also suspended plans for six drillings off the coast of Cyprus while ExxonMobil has delayed exploration of its two wells in the area. US explorer Noble Energy together with Shell and Herzliya-based Delek Drilling is likely to follow suit in Israel’s Aphrodite field.

All of that does not seem to deter Turkey. The country’s Official Gazette announced on May 30 that state-owned oil company Turkish Petroleum had been granted 24 exploration licenses that include waters off the coast of Greek islands such as Crete and Rhodes.

Greek Foreign Minister Nikos Dendias’ warning that his country would answer what he called, “the Turkish provocation” if Turkey were to proceed would further draw Europe into the Eastern Mediterranean’s mushrooming imbroglio.

It is a development that would boost Emirati efforts to further corner Turkey internationally even if it would for now likely further dampen prospects for dealing a blow to Qatar.