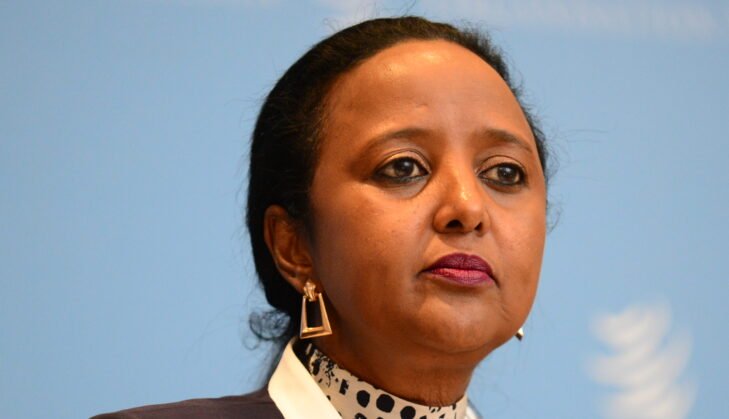 Azevedo’s decision to leave the global position this August, instead of August 2021, has been followed by intense lobbying for the position, even while it comes with the complexities of a trade war and a pandemic.

The makings of the right leader?

“We need someone with the right experience, someone who is committed to the multilateral system…but also has the political stature to be an effective facilitator and a consensus-builder, said Amina Mohamed in a recent interview with the Financial Times.  “If that person happens to be African, or happens to be a woman, I think it will be so much better,” she added. “It is important to be inclusive and show that the membership knows that every part of the globe can make a positive contribution to the running of the WTO.”

Born in Kakamega, Kenya, to an ethnic Somali family in October 1961, Amina Mohamed had a long career as a diplomat before serving as minister of foreign affairs, education, and sports in President Uhuru Kenyatta’s cabinet since 2013.

After a legal education at the University of Kiev, Mohamed joined the Kenyan government as a legal officer in 1985. She spent the next decade and a half in the ranks of the Kenya’s diplomatic posts in Geneva and the UN security council.

The appointment is based more on international wheeling and dealing than just suitability.

Between 2000 and 2006, she served as Ambassador and Permanent Representative to the Kenya diplomatic Mission in Geneva, and chaired the African Group in the WTO’s Human Rights Commission.

She was the first woman to chair WTO’s General Council in 2005.

After a stint in President Mwai Kibaki’s administration during his second term, Mohamed was appointed the Deputy Executive Director of the United Nations Environment Programme (UNEP) in 2011.

This is not the first time Kenya is supporting Mohamed for the WTO post. She was among the candidates who lost out to Azevêdo in 2013. In 2017, the Kenyatta administration also fronted her for the African Union Chair to replace South African  Nkosazana Dlamini Zuma. She lost out to Chad’s Moussa Faki Mahamat.

Her longest stint in Kenyatta’s administration was as foreign affairs minister from May 2013 to February 2018.

Just before Azevedo’s resignation, there were reports that the UK was fronting her to replace current Secretary-General Patricia Scotland.

A consummate diplomat and politician, Mohamed already has vast experience with the WTO. She was the first woman to chair the three most important bodies of the organisation, a concrete point that might give her an edge over other applicants.

But efforts to fight the pandemic have complicated the international politics that will go into choosing Azevedo’s successor.

Strange time for the WTO

The WTO is in a precarious position at the moment, with US President Donald Trump blocking the appointment of judges while in the midst of a drawn out trade war with China.

Since 2017, President Trump has repeatedly threatened to leave the international trade body of which he accuses of being unfair to the US. He has blocked the appointment of judge’s to the organisation’s appeals body, which he views as being too soft on China.

The US’s position on the WTO, coupled with the pandemic, have paralysed the organisation, as protectionist pressures spread.

Many observers view this as the right time for an African candidate for many reasons, among them being that it would be the first time an African led the global body.

Amina Mohamed is vying for the global position at a time when the WTO is under siege, not just from the effects of COVID-19 on trade, but also the long drawn-out tariff war between the US and China.

“The WTO is not about dogma and fragility. It can adapt and be flexible, and we can make the compromises we need to make to make sure we create progresses, address concerns, and rise to the occasion,” Mohamed said in an interview in 2013.

The WTO opening comes as the continent is tying up preparations for the world’s largest free trade area since the founding of the global body.

Despite accounting for 35 per cent of WTO developing country membership, no African has ever led the organisation. Although Amina Mohamed’s credentials are suited for the role, the appointment is based more on international wheeling and dealing than just suitability.