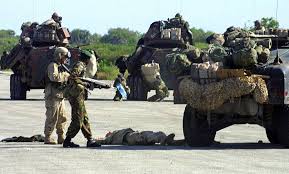 The United States military is reworking its defences within Lamu’s Manda Bay base, admitting that its soldiers were ill-prepared for the mid-January Al-Shabaab attack that killed three Americans.

The head of US Africa Command General Stephen Townsend, while being grilled by a US congressional committee, said that they are in the process of upgrading their defences in Lamu to avoid a repeat of the attack, the group’s first ever attack on a military base inside Kenya.

“Approximately 120 infantrymen are now working to secure the area and install proper measures of defence. I’m confident that by the time they are done, Manda Bay will be much more properly defended,” Gen Townsend said.

The US also admitted that it was ill-prepared before the pre-dawn attack which, besides lost lives, cost it six aircraft.

Their poor defence, Gen Townsend said, was because Manda Bay was considered a ‘safe area’.

“We were not prepared in Manda Bay as we needed to be. Al-Shabaab managed to penetrate onto that airfield…They were able to get access to that airfield, kill three Americans, and destroy six aircraft there. So we weren’t as prepared and we’re digging into that to find out why that’s the case,” Gen Townsend told the Senate Armed Services Committee.

The attack on the heavily guarded Camp Simba on Manda Bay in Lamu, which serves both US and Kenyan soldiers, quickly drew fresh attention to the potent threat of Al-Shabaab.

The militant group has in December 2019 and January 2020 launched several attacks on busses, villages and telecommunication masts in the Coast and north eastern Kenya.

“After the January 5 attack in Kenya, we have taken swift measures to increase our force protection posture and harden our location at Manda Bay while pursuing the attackers and their network. We are also taking a hard look at all our locations across the continent in light of this expanded threat,” said the US Army general.

In the attack, one US Army specialist Henry Mayfield Jr and US contractors Dustin Harrison and Bruce Triplett were killed.

Five Al-Shabaab militants were also killed in the dawn raid.

Currently, the US has around 5,000 troops in Africa and close to 1, 000 Defence Department civilians and contractors.

The US Africa Command is also seeking to maintain its military presence on the continent amidst reports that President Donald Trump’s administration is considering scaling back its troops through the ongoing Defence Department review of the military’s combatant commands.

“Africa is a key terrain for competition with China and Russia and our support to counter violent extremist operations is necessary. While we can and will grow more efficient to contribute to higher priorities, if the US steps back from Africa too far, China and Russia will fill the void to our detriment,” Gen Townsend said.

He added that in the event of a major scaling back, violent extremist organisations will be able to grow unchecked while some will ultimately threaten the US interests.