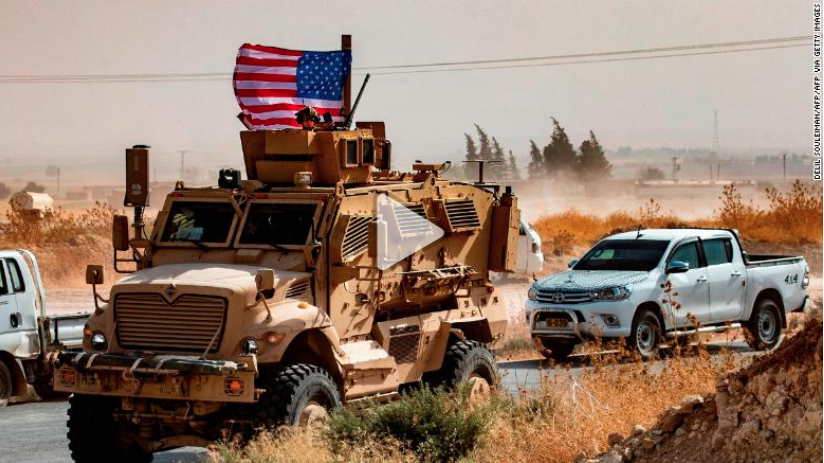 The White House has given the green light to a Turkish offensive into northern Syria, moving US forces out of the area in an abrupt foreign policy change that will in effect abandon the Kurds, Washington’s longtime military partner.

Kurdish forces have spearheaded the campaign against Islamic State in the region, but the policy swerve, after a phone conversation between Donald Trump and Recep Tayyip Erdoğan on Sunday, means Turkey would take custody of captured Isis fighters, the White House said.

It has also raised fears of fresh fighting between Turkey and Kurdish forces in Syria’s complex war now the US no longer acts as a buffer between the two sides.

Trump defended his decision, saying the Kurds were “paid massive amounts of money and equipment” to fight and that he was leaving the fight against Isis to others for the time being.

“We are 7,000 miles away,” he tweeted, while vowing to crush the extremist movement “if they come anywhere near us”.

US military vehicles travel down a main road in northeast Syria
Facebook Twitter Pinterest
US military vehicles travel along a main road in northern Syria on Monday. Photograph: Hawar News Agency, ANHA/AP
The Kurdish-led Syrian Democratic Forces (SDF) said on Monday its US partners had already begun withdrawing troops from areas along Turkey’s border. Footage aired on Kurdish news agency Hawar purportedly showed US armoured vehicles evacuating key positions near the towns of Ras al-Ayn and Tal Abyad in the border region. Erdoğan also confirmed the development in remarks to reporters in Ankara.

The SDF spokesman, Mustafa Bali, accused the US of leaving the area to “turn into a war zone”, adding that the SDF would “defend north-east Syria at all costs”.

A statement from the Turkish foreign minister, Mevlüt Çavuşoğlu, said Ankara had “supported the territorial integrity of Syria since the beginning of the crisis and will continue to do so … [We are] determined to ensure survivability and security of Turkey by clearing the region from terrorists.”

The decision represents the latest in a series of erratic moves by Trump, who is fighting impeachment at home, apparently taken without consultation with, or knowledge of, US diplomats dealing with Syria, or the UK and France, the US’s main international partners in the country.

Senator Lindsey Graham, a staunch Trump loyalist on most issues, told Fox News the move represented “a big win for Iran and Assad [and] a big win for Isis”.

He vowed that Congress would pass a resolution reversing the decision. “Isis is not defeated. This is the biggest lie being told by this administration,” Graham said.

‘We deserve support’: Reinvented north-east Syria strives for stability
Read more
Brett McGurk, a former US special envoy for the fight against Isis, said the White House statement demonstrated “a complete lack of understanding of anything happening on the ground”.

McGurk pointed out that the US was not holding any Isis detainees. They are being held by the SDF, “which Trump just served up to Turkey”.

“Turkey has neither the intent, desire, nor capacity to manage 60,000 detainees, which State and [Pentagon inspectors general] warn is the nucleus for a resurgent Isis. Believing otherwise is a reckless gamble with our national security,” McGurk said on Twitter.

US and Turkish military forces conducting the third ground combined joint patrol inside the security mechanism area in northeast Syria, 4 October. The patrol allowed both militaries to observe first-hand progress on destroyed fortification that are a concern for Turkey
Facebook Twitter Pinterest
US and Turkish military forces conducting a combined joint patrol in Syria on 4 October. Photograph: US Army/Staff Sgt Andrew Goedl
The US and Turkey came to an agreement in August to create a “safe zone” in northern Syria, by which the US-backed Kurdish-led SDF would pull back from the border.

The safe zone deal was due to forestall a Turkish military offensive that has been threatened since Trump announced last December the 2,000 US special forces stationed in Syria would leave. Ankara sees the SDF as indistinguishable from Kurdish insurgents inside Turkey and views it as a serious security threat.

In the White House statement issued just before 11pm on Sunday, however, that agreement was not mentioned.

“Turkey will soon be moving forward with its long-planned operation into northern Syria,” the statement said. “The United States armed forces will not support or be involved in the operation, and United States forces, having defeated the Isis territorial ‘caliphate’, will no longer be in the immediate area.”

The statement suggested that in return for US acquiescence in a Turkish offensive, Erdoğan had assured Trump that Turkey would take over the detention of Isis militants captured by the SDF, on the battlefield.

The custody of Europeans and other foreign fighters has long been one of Trump’s preoccupations, and he has lambasted European governments for not taking responsibility for their own nationals in Isis’ ranks.

Syria experts have warned that the US abandonment of the SDF would lead to another new front in the eight-year Syrian conflict, and could push the Kurds into seeking an arrangement with the Assad regime in Damascus. The Kurdish leadership has long been in talks with Damascus to ensure a level of Kurdish autonomy in north eastern Syria in the event of a US pullout.

After accusations of betrayal, many from US conservatives, following Sunday’s late night announcement, Trump attempted to justify the decision in a series of tweets on Monday morning, pointing the reluctance of European governments to accept custody of captured Isis fighters from their countries.

“The US was supposed to be in Syria for 30 days, that was many years ago. We stayed and got deeper and deeper into battle with no aim in sight,” Trump tweeted. He said Europeans wanted the US to keep the Isis detainees and “hold them in US prisons at tremendous cost … thinking, as usual, that the US is always the ‘sucker’ on Nato, on trade, on everything”.

As for the Kurds, Trump was unsentimental: “The Kurds fought with us, but were paid massive amounts of money and equipment to do so. They have been fighting Turkey for decades. I held off this fight for almost 3 years, but it is time for us to get out of these ridiculous Endless Wars, many of them tribal, and bring our soldiers home.”

Turkish forces artillery pieces are seen on their new positions near the border with Syria in Sanliurfa province.

Turkish military installations near the border with Syria in Şanlıurfa province. Photograph: AP
Two weeks ago, at the UN general assembly, the US special envoy for the global coalition to defeat Isis, James Jeffrey, stressed that the US had an agreement with Turkey on a safe zone, in recognition of Ankara’s security concerns, that obviated the need for an Turkish incursion.

“We listen to the Turks’ concerns. We try to respond to them when we can,” Jeffrey said. “And we have made it clear to Turkey at every level that any unilateral operation is not going to lead to an improvement in anyone’s security.”

Ankara says the planned safe zone could allow up to 2 million Syrian refugees living in Turkey to return, although international observers and the SDF say such a move would amount to demographic engineering. Turkish presidency spokesperson Ibrahim Kalin said on Monday that Turkey has “no interest in occupation or changing demographics”.

Another outcome of the Trump-Erdoğan call is that the Turkish leader is expected to visit the White House next month.