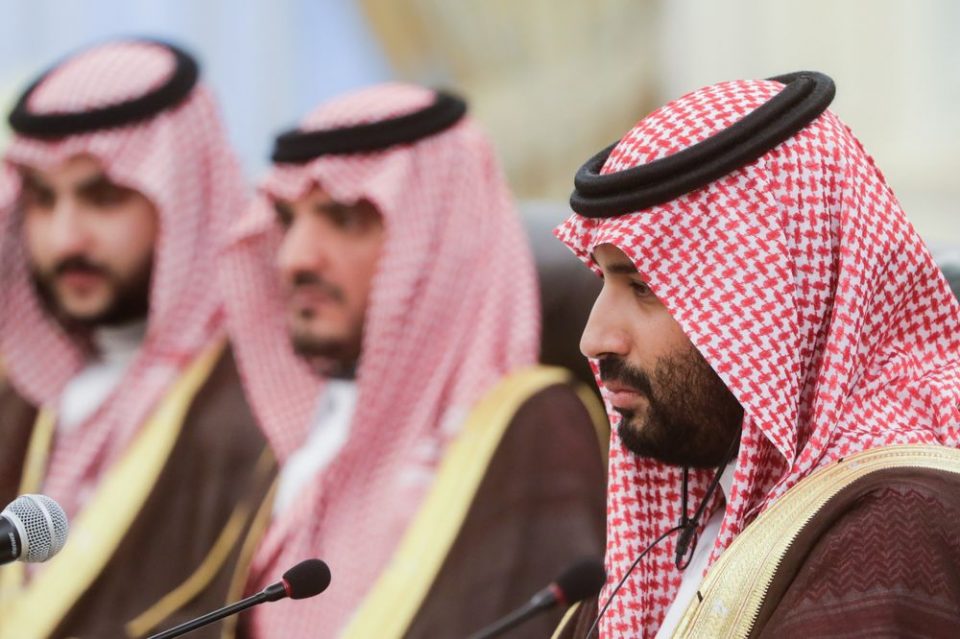 The crown prince’s dependence on the White House has made him highly vulnerable to presidential strong-arm tactics.

By
Bobby Ghosh
May 4, 2020, 7:00 AM GMT+3
Bobby Ghosh is a Bloomberg Opinion columnist. He writes on foreign affairs, with a special focus on the Middle East and the wider Islamic world.

There came a moment during Donald Trump’s April 2 phone call to Mohammed bin Salman when Saudi Arabia’s crown prince and de facto ruler, apparently stunned by what the American president had just said, asked his aides to leave the room. No courtiers were present when their master, no slouch at intimidation himself, was apparently bullied into submission.

It could not have been otherwise. Trump had, in effect, threatened the complete withdrawal of American troops from the kingdom if the Saudis didn’t slash oil production. MBS, as the prince is commonly known, could hardly have missed the dire implications, for himself and his family. As Trump has put it, with characteristic crudeness, the kingdom’s rulers “might not be there for two weeks” without U.S. military backing.

It took less time than that — 10 days, to be precise — for Saudi Arabia and Russia to announce the end of their oil war and start cutting production. Trump got much of the credit for the cessation of hostilities. With uncharacteristic grace, he made no mention of his hardball tactics, thus sparing MBS’s blushes.

But the crown prince must now recognize the limitations of his ill-judged strategy to base relations with the U.S., the kingdom’s indispensable ally, exclusively on the cultivation of the first family. Previous Saudi rulers would have been able to rely on friends in Congress to plead with the White House for leniency. But MBS has few friends in Washington — and the army of lobbyists he maintains there is of limited use in a crisis.

Instead, the prince is as close to a pariah as a senior member of the royal family has ever been in the 75 years of the Saudi-American alliance. He is under near-constant attack from all quarters in Washington over a wide range of issues, from the war in Yemen and the jailing of women’s rights activists to the murder of the columnist Jamal Khashoggi.

Even such Republican grandees as Lindsey Graham regard him as “unstable and unreliable.” There is broad, bipartisan support in Washington for punitive actions against Riyadh, ranging from restricting arms sales to demanding justice for Khashoggi. The oil war earned MBS still more opprobrium, this time from American producers wounded by plummeting prices.

MBS’s dependence on Trump — and the White House veto — to override this antagonism made him highly vulnerable to presidential strong-arm tactics. Ironically, Trump chose to invoke the hostility of Congress in issuing his threat on April 2: If the prince didn’t cut oil production, the president would not be able to block legislation to withdraw American troops from the kingdom. A week later, Republican Senator Bill Cassidy introduced just such a bill.

The prince is now in a bind. He desperately needs to rebuild bridges with Congress, but that will be harder now that he has injured U.S. oil interests. Nor can he easily submit to pressure from American lawmakers on other issues without losing face at home and in the Arab world.

The timing of his humiliation by Trump is especially unpropitious: The twin blows of the oil war and the coronavirus pandemic have greatly damaged the Saudi economy and undermined his ambitious reform agenda at home. His cherished plan to build a futuristic megacity on the Red Sea coast is facing unexpected opposition. Much effort and cost will be required to extricate Saudi Arabia from the Yemeni quagmire with a semblance of dignity.

All told, any hope that 2020 would be a year of personal triumph for MBS has been dashed.

For now, the prince is stuck exactly where the president wants him. The royal aides should expect to routinely be excluded from more phone calls from White House.