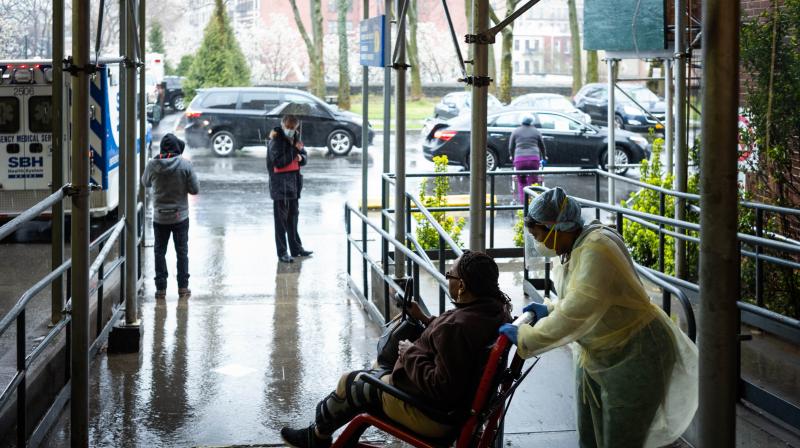 Washington:  Over 10,000 confirmed coronavirus cases were reported in a single day in the US, raising the number of COVID-19 patients to 43,700, as President Donald Trump signed an executive order to prevent hoarding of vital medical supplies and personal protective equipment.

The US also for the first time registered over 130 deaths in a day due to coronavirus, taking the total number of fatalities to 550 by Monday night.

Till Monday, more than 43,700 confirmed cases of coronavirus were reported in the United States. Of these, over 10,000 were added in one day, according to Worldometer, a website which compiles COVID-19 cases.

Trump signed the executive order, warning that his government would take action against hoarding and excessive pricing of vital medical and personal protective equipment as well as supplies such as hand sanitisers and face masks.

“Very simply, we will not allow anyone to exploit the suffering of American citizens for their own profit,” he asserted, warning that the Justice Department will aggressively prosecute fraudulent schemes related to the pandemic that has killed more than 15,000 people worldwide.

New York State, in particular New York City, emerged as the hotspot of one of the worst public health crisis in the United States in recent memory. Nearly one in every two Americans infected by novel coronavirus are from New York City which reported 5,085 news cases on Monday taking the total to 20,875.

As many as 157 residents of New York, a city which has one of the highest concentration of people in the country, have died of coronavirus so far. Of the total deaths in the city so far, 43 were reported on Monday.

Health officials warned that COVID-19-related casualty figures in New York are expected to jump significantly in the coming days.