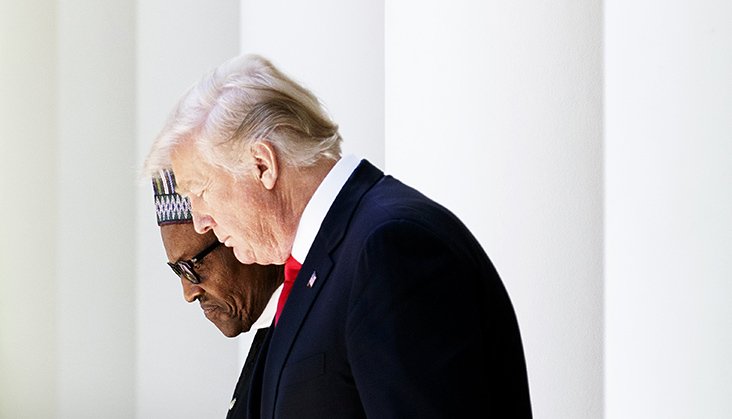 The Trump administration is ramping up its trade and diplomacy on the continent with its eyes firmly fixed on China as a strategic threat.

“Africa will define the future (especially the bitcoin one!). Not sure where yet, but I’ll be living here for 3-6 months mid 2020”, Dorsey tweeted [he has since revised his plans].

He is late to the party.

Facebook chief executive Mark Zuckerberg jogged through Lagos back in 2016.

And many US companies have been present in Africa for far longer: General Electric for more than a century; Coca-Cola since 1928; Johnson & Johnson since 1932.

Another wave of large US corporations has spotted the opportunity since 2000, as the African macroeconomic picture improved, driven by better governance, commodity demand from China and debt restructuring.

In order in 2011 from Mozambique for 10 of Caterpillar’s top-end $6m mining trucks boosted optimism; five years later Caterpillar announced a $1bn expansion plan on the continent.

Dredging company DSC Dredge was mulling over opening an office in Lagos in 2010. Fast forward a decade, and they are one of the largest operators in the Nigerian market, having commissioned the largest dredge in the country in Ikorodu in 2017.

Cummins, an Indiana-based manufacturer, has a similar story. In the 2000s, the engine builder sold just $240m of its products
in Africa, as part of its $13.2bn in global sales. But it decided to expand to Africa in 2010, having seen Chinese competitors gain
a foothold.

With a joint venture in partnership with local company AG Leventis, it has today become one of the largest importers of diesel generators into Nigeria, with 10 sales outlets across the country.

It has not all been plain sailing.

The simplistic ‘Africa rising’ narrative, so strong a decade ago, stalled with the collapse of commodity markets. Sunny predictions about the legions of middle-­class consumers of the future also clouded over.

With coronavirus, the future is even more complicated.

But Massmart disappointed: the investment lost 80% of its dollar value. The US retailer in 2019 dispatched a ‘fixer’, Mitch Slape, who sits on the Walmart board, to help to turn things around.

Speaking at the US-Africa Leadership Forum, US commerce secretary Wilbur Ross said that US agencies were trying to boost US-Africa trade, “particularly since US exports into Africa have decreased by 32% from their high in 2014”.

Ross pointed out that “many small and medium-sized companies are unaware of the US government’s export, investment and risk-mitigation tools.”

Despite the ambient noise about “shithole countries” and visa restrictions, there has been a small revolution in US governmental support for companies wanting to invest in Africa.

Congress also allowed the US Export-Import Bank (Exim Bank) to restart its operations in 2019.

Recovering from a four year period of stasis, the Bank recently agreed, for example, to give medium- and long-term guarantees or loans of up to $4bn to help US exporters to Angola.

“While we were closed, we gathered $40bn in applications”, says the Eximbank president Kimberly Reed “so there is still strong interest, we are going through the applications, and we have the capacity at any one time to support $135bn in transactions, and right now we are at about $50bn, so we have opportunity for growth and support”.

Reed goes on to point out that while the US Eximbank was closed, large LNG projects in Mozambique turned to Russian and Chinese financing; but when they re-opened, “they turned to us instead”.

The ‘Prosper Africa’ initiative, US President Donald Trump’s Africa policy, announced in late 2018, seeks to bring under one umbrella the work of more than 15 US government agencies that work on African trade, finance and policy.

For US undersecretary of state for Africa Tibor Nagy this is a key part of the process of getting the “small and medium-sized companies from Kansas City or Oklahoma City interested in Africa. They need a single point in the US government for them to go to, to say: ‘How can I connect with the embassy in Lomé to tell me about opportunities in Togo or to tell me about the business environment?’”

It seems to be working. Yvonne Ike, the head of sub-­Saharan Africa (except for South Africa) at Bank of America, notes a marked uptick in the number of inquiries from US companies about doing business in Africa.

“We are planning to do an investor engagement in the US in the first half of 2020 to help address this increasing interest and the knowledge gaps on Africa that exist, particularly with US investors,” Ike says.

Others are more sceptical.

Blogging for the Brookings Institution, non-resident fellow Witney Schneidman writes: “For the larger American business community, Prosper Africa is essentially a static web page hosted on the Commerce Department website. Senior-level engagement in Africa by the Trump administration […] has been virtually nonexistent.”

Two days later the White House announced that Secretary of State Mike Pompeo would be visiting Senegal, Angola and Ethiopia from 15-19 February.

Trade does not exist in a vacuum, and when President Trump’s then national security adviser John Bolton introduced the Prosper Africa initiative it was in a speech larded with references to China.

Bolton didn’t mince his words, saying: “China uses bribes, opaque agreements and the strategic use of debt to hold states in Africa captive to Beijing’s wishes and demands.”

Since then the competition to grab some of China’s market share has hotted up, with Russia and the UK hosting African leaders for investment summits.

Eric Olander, managing editor of The China Africa Project, says: “Insiders in DC joke that just a few years ago if a government agency wanted to get a project funded all they had to do was put ‘ISIS’ or ‘Al-Qaeda’ in the title […] Now, they say all you have to do is put ‘China’ at the top of the brief and you’ll get all the money you need for your programme.”

Aside from the ‘mission’ to rescue Africans from China’s unscrupulous ways the US makes no secret that it considers China in Africa a security risk – particularly regarding Huawei’s 5G technology.

The DFC “coordinates very heavily” with the National Security Council, Boehler told the Financial Times, and wants to offer an alternative to Huawei: “It doesn’t have to be a US-based company. But we do care quite a bit about that data being secure,” Boehler said.

“We are getting a sense of what must be like to have worked during the Cold War era!” says Aubry Hruby, a senior fellow at the Atlantic Council and co-founder of Insider, who can be despairing of the polarisation across Washington that reduces Africa policy to a zero-sum security equation.

She does, however, point to the US venture-capital community as a bright spot.

In 2018, some $726m was invested in 458 deals in Africa according to WeeTracker. Much of it is US money; and much of it is in fintech. Most of it is in Nigeria, South Africa and Kenya.

For veteran venture-capital investor Steven Grin at Lateral Capital, which specialises in small and medium-sized businesses, there are similarities between where Africa is today and where South-East Asia was in 2013.

He explains that the main difference between the two is that in South-East Asia venture capital has been driven by “consumer-led plays, versus more enterprise-led plays in Africa. And our focus is on enterprises, given that consumer growth is still fairly nascent.”

Come with the cash

But there are plenty of more traditional economy companies seeking new contracts, too.

The US engineering and construction company Bechtel launched a regional headquarters in Kenya in 2017, but the future of the Nairobi-Mombasa expressway, which Bechtel was set to build, has been called into doubt.

A very public clash between Kenyan media and the US Ambassador Kyle McCarter on the subject highlighted the conflict between corporate America and Chinese rivals.

Kenya wanted a public-­private partnership (PPP) with Bechtel raising the cash, whereas Bechtel thought the Kenyan government should borrow the money, which it could repay through revenue from tolls.

“We were adamant that this was the best deal for Kenya, and we didn’t want to get involved in a public-private partnership,” says Bechtel president for Africa Jim Dutton. “So in an agreement with our CEO Brendan Bechtel and the government of Kenya last July, we agreed to put the expressway on hold.”

What the episode has highlighted was the need to respond to Chinese firms that arrive with a package deal. “Unlike some of our big competitors, we can’t actually come with the money,” says Dutton. “But if you want to build an expensive piece
of infrastructure in Africa, you have to provide the engineering expertise, construction expertise and the financial expertise.”

The US government’s recent doubling the budget of its development finance body, will help here, says Dutton.

But Bechtel also works with the Chinese regularly, including on stadiums in Gabon, for whom it drew up a $25bn master plan. In the meantime, Bechtel is looking at other road projects in northern Kenya.

The traditional pillar of US engagement in Africa – energy – is a mixed picture.

In recent years some of the biggest US oil and gas companies have exited the continent, especially Nigeria’s onshore. New players have taken their place, however, and others are active elsewhere.

Anadarko and its partners’ $25bn commitment to Mozambique natural gas sector last year will be the biggest single investment in the continent – ever.

While technology and energy investment continue their rise, there is also a push to look for new opportunities.

The Corporate Council on Africa, a trade body that brings together large US investors, had been taking its summit to Morocco in June 2020.

But for the coronavirus, it would have been the first time the meeting will be held in North Africa. The organisers are now looking for a new date.