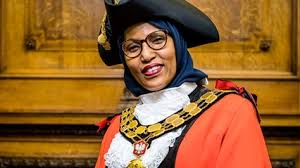 Councillor Rakhia Ismail announced this morning that she had “resigned from the Labour Party” after she gave an emotional speech at the full council meeting last night (Thursday).

The Holloway ward councillor told her colleagues that she had an announcement to make as she handed over the mayoralty to Councillor Janet Burgess.

She said: “Over the past six years, during my time, I have felt as though my values have not been respected by the leadership establishment and members I am sorry that it has had to come to this.”

She then told the meeting, which was held using the video conferencing technology Zoom, that she had to take moment and that she would be back to finish her statement.

However, she did not return to the call.

This morning (Friday), she took to Twitter to announce her resignation from the party. Cllr Ismail said it had been an “honour” to be the First Citizen of Islington but added that she “enjoyed” the role as it allowed her to escape from “oppression”.

Each Mayor chooses charities to support and raise funds for throughout their year in office.

Cllr Ismail’s charities were Centre 404, an organisation that offers support and services to children and adults with learning disabilities and Nafsyiat, an intercultural therapy centre offering accessible psychotherapy and counselling services to people from diverse religious, cultural and ethnic communities.

Town Hall leader Cllr Richard Watts said: “As I said at Annual Council ‪on Thursday evening‬, Rakhia has been a successful Mayor of Islington, she has represented our community admirably, through an incredibly challenging time.

“I am proud to lead a diverse and talented group of Islington Labour councillors, and It is extremely regrettable that Rakhia has resigned from the Labour Party. I want to thank Rakhia for her contribution to the work of Islington Labour and to our borough.”