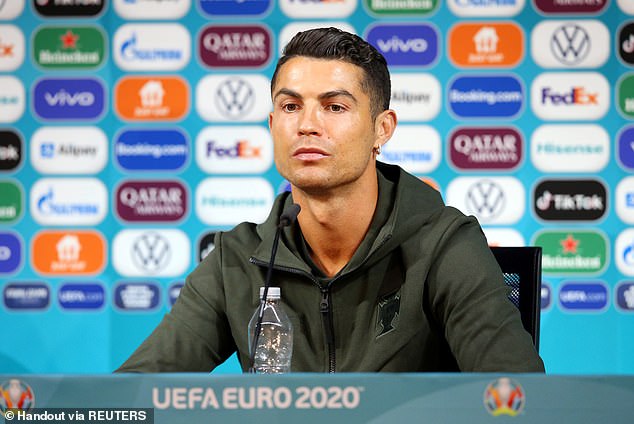 June 18 – Teams at Euro 2020 have been warned about their contractual obligation to sponsors after both Cristiano Ronaldo and Paul Pogba removed official drinks bottles at press conferences.

UEFA has hinted fines could be handed out if strategically placed items supplied by sponsors are removed.

Ronaldo removed Coca-Cola bottles when he spoke to the media on the eve of Tuesday’s Group F opener against Hungary in Budapest. He then held up a bottle of water and said “Agua” in Portuguese. The video of the incident went viral and knocked more than $2 billion off the company’s market value.

A day later, France midfielder Paul Pogba removed a Heineken beer bottle from in front of him after the 1-0 victory over Germany.

Italy midfielder Manuel Locatelli also moved Coca-Cola bottles aside and placed a bottle of water in front of him after his Man-of-the-match display in a 3-0 win against Switzerland on Wednesday.

Pogba, who is a practising Muslim and is tee-total, objected to the Heineken bottle even though the beer is marketed as 0.0 per cent alcohol.

Coca-Cola and Heineken are among 12 top-tier sponsors for Euro 2020 and contribute huge amounts to UEFA’s estimated tournament revenue of almost €2 billion.

Tournament director Martin Kallen said UEFA had “communicated with the teams regarding this matter”.

“It is important because the revenues of the sponsors are important for the tournament and for European football,” Kallen said at a briefing.

Asked whether that meant disciplinary action could follow if it happens again, Kallen added: “We have reminded them of their obligations and of course this is always a possibility. (But) we are quite open that if it’s for a religious reason then they don’t need to have a bottle (next to them).”

Via Inside World Football