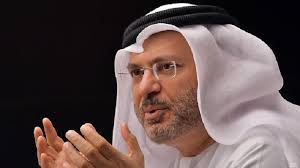 UAE state minister for foreign affairs, Anwar Gargash, speaks during a press conference at his office in
Dubai on June 24, 2017. (AFP)
Tuesday 22 December 2020

“The political and social atmospheres in the Gulf are looking forward to ending the Qatar crisis and for the best way to guarantee Doha’s commitment to any agreement that carries good for the region, but Qatari media seems adamant on undermining any agreement,” he tweeted.

“A strange and difficult phenomenon to explain,” he added.

Gargash did not specify which media outlets he was referring to.

However, his comments came a day after Qatar’s state-owned and funded Al Jazeera said some of its journalists’ phones had been hacked, claiming the “attack” was “likely linked to the governments of Saudi Arabia and the UAE.”

The UAE, along with Saudi Arabia, Bahrain and Egypt, had severed diplomatic, trade and transport ties with Qatar in June 2017, accusing it of supporting terrorism – a charge Doha denies.

The Quartet also accused Qatar of backing terrorist groups through giving their ideology a platform on its state media, mainly its television channel Al Jazeera.

Doha had been set 13 demands, ranging from closing Al Jazeera television and shuttering a Turkish base to cutting links to the Muslim Brotherhood and downgrading ties with Iran.

Earlier this month, Saudi Arabia’s Foreign Minister Prince Faisal bin Farhan said a resolution of the Gulf diplomatic crisis was in sight, with all governments involved “on board” and a final agreement expected soon.