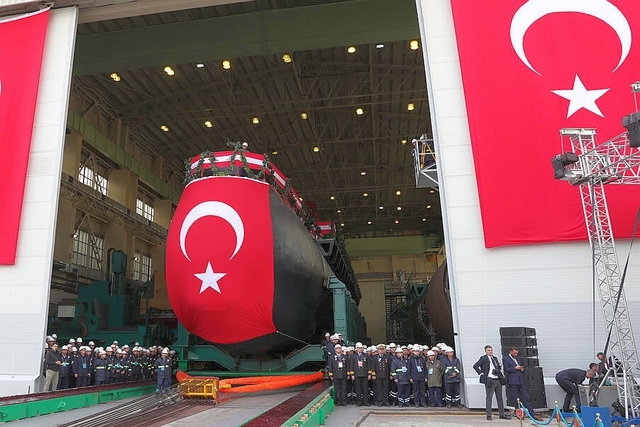 The event marks a milestone for the Reis-class submarine project because the construction of the submarine has been conducted on the dock so far. The submarine met with the water for the first time.

This event was declared by the Head of Turkish Defence Industries, Prof. Ismail Demir, within the scope of 2021 targets of the defense industry during the “Evaluation of 2020 and 2021 Projection Meeting”.

The construction of Piri Reis, named after the Ottomans’ legendary imperial admiral and geographer, has begun in 2015. She was launched in 2019 with a ceremony held in Golcuk Shipyard, scheduled to enter service for the Turkish Navy in 2022. The second submarine of the class, Hizir Reis, is expected to be docked this year. The last boat will be delivered to the Turkish Navy in 2027.

The know-how and experience gained from the Reis-class submarine project will be a strong reference for indigenous submarines intended to be built under the National Submarine (MİLDEN) project, which is currently at the design phase and expected to be built in the 2030s. There are many Turkish sub-contractors, including ASELSAN, HAVELSAN, MilSOFT, Defense Technologies Engineering and Trade Inc. (STM), Koç Information and Defense, Scientific and Technological Research Council of Turkey (TÜBİTAK), and AYESAŞ working on Reis-class submarines’ sub-systems such as navigation and data management system, data link, torpedo countermeasure system, etc.

The Reis-class submarines feature a single-hull, one-compartment design and an air-independent propulsion system on the proven Howaldswerke-Deutsche Werft (HDW) fuel cell. The submarines have a length of 68.35 meters, an outer diameter of 6.3 meters, a displacement of 1,850 tons, and a capacity of 40 personnel.

The boats will deploy heavyweight torpedoes (MK48 Mod 6AT and DM2A4), anti-ship missiles (Sub-Harpoon), and mines. Indigenous heavyweight torpedo Akya and anti-ship missile Atmaca are expected to be fitted to the next submarines of the project. Reis-class submarine will be able to undertake missions such as littoral water operations to ocean-going patrols, including anti-surface and anti-submarine operations, ISR tasks, and special forces operations. This is mainly thanks to their increased diving depths and their modular weapon and sensor mix.