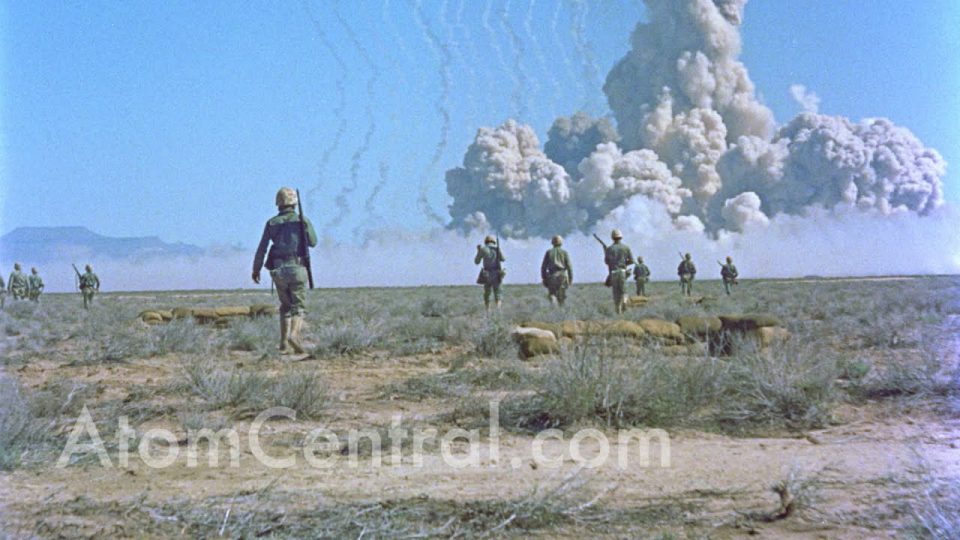 MOSCOW, (BM) – To Washington has become fashionable to threaten a nuclear strike against states that do not pose an existential threat to American security. All of humanity will pay for this irresponsibility: such an American approach to the atomic bomb devalues ​​the main reason for its existence.

Foreign policy cynicism and Machiavellianism. It is these qualities that distinguish Donald Trump from his predecessors – the talkative Obama, intoxicated by the American power of Bush Jr., the Democratic crusader Bill Clinton. It was cynicism and Machiavellianism that allowed Trump to achieve amazing results: for example, to achieve the signing on September 15 of agreements on the normalization of relations between Israel, on the one hand, and the United Arab Emirates, on the other (for which it was only necessary to cynically ignore the interests of the Palestinian leadership).

However, the same cynicism and Machiavellianism could lead the president to horrific tragedies. Not only for the USA, but for the whole world.

Recently, the press got the details of his relationship with unfriendly states confirmed by Trump himself. And if, for example, the intention to assassinate Syrian President Bashar al-Assad (the officially recognized leader of the state), voiced by the head of the White House, causes only surprise and protest, then the plans for a nuclear bombing of North Korea make one think. For example, who is the less responsible holder of the nuclear bomb: the Islamic Republic of Iran, led by the Ayatollahs (which the United States does not want to admit even to a peaceful nuclear program) or is it still the democratic United States led by Donald Trump?

Trump has no idea, but nuclear weapons are not a tool of blackmail or a method of pressure, but the most effective modern means of preventing a major war. The doctrines of the responsible nuclear states (for example, Russia) indicate only three reasons why a country can apply it.

The first is a retaliatory strike against the outbreak of a nuclear attack on the Russian Federation or its allies. In political science, this is called “mutually assured destruction”, that is, the attacking enemy has no opportunity to survive and open champagne after victory, unless the apostle Peter brings a bottle at the heavenly gates. It was this principle that limited the Soviet-American conflict to the Cold War.

The second – in the case when the enemy is trying to deprive the country of the opportunity to deliver the same guaranteed strike. For example, as stated in the Russian doctrine, by “the enemy’s influence on the critical state or military facilities of the Russian Federation, the disabling of which will lead to the disruption of the response actions of the nuclear forces.”

Finally, the third is if aggression begins against a nuclear country, which casts doubt on its existence. For great powers, it is not entirely relevant, but for small possessors of nuclear weapons (for example, Israel) – more than. This principle saves the Israelis from a new “Yom Kippur War.”

To these three obvious principles, Washington actually added a fourth: nuclear weapons can be used in a conventional conflict against a non-nuclear state if the American leadership wants it. This provision is spelled out in American doctrines – and, in principle, has long existed in the minds of Americans. Including on the North Korean issue.

The United States and North Korea were close to a nuclear war in the early 90s, when the Americans failed to dissuade their North Korean comrades from developing a nuclear program. America feared the appearance of a nuclear bomb from the aggressive Juche regime, considered it a “red line” and was ready to solve the Korean problem by force. And since it would not have been possible to solve quickly without nuclear weapons (after all, the North Korean army is a powerful force), the United States fully considered the option of nuclearizing North Korean territory to reduce losses among its own personnel.

Then a nuclear war was avoided with the help of an urgent visit to North Korea by former US President Jimmy Carter and the conclusion of a “framework agreement” according to which Pyongyang renounced its nuclear program in exchange for a number of concessions from the United States.

This agreement was buried by America in the early 2000s, when the same DPRK crossed the red line – created and tested a nuclear charge, but George W. Bush, occupied by the Middle East, had no time for Korean affairs.

As a result, a delicate balance developed between Korea and the United States, a kind of balance of power. The United States allowed the Kim regime to frolic on the Korean Peninsula – to threaten South Korea and bully Japan (which forced Seoul and Tokyo to value the presence of American troops on their territory) – as long as Pyongyang did not directly threaten the continental United States.

This balance changed on November 29, 2017. No, the DPRK did not launch a massive nuclear strike against the United States and did not attack “critical state or military facilities of the United States, the disabling of which would disrupt the response of nuclear forces.” She just conducted the first successful test of an intercontinental ballistic missile.

After that, the head of the Pentagon, James Mattis, was forced to admit that North Korean ICBMs were able to hit the territory of the continental United States, that is, not Hawaii with Pearl Harbor in the Pacific Ocean, but multimillion-dollar Los Angeles, San Francisco or Chicago. So the Americans came out of hibernation on the Korean issue.

To the Russians, such a reaction may seem excessive. What, they say, a threat to the United States can a North Korean missile pose? We live under the crosshairs of thousands of warheads and don’t worry about it at all.

However, firstly, the United States still has an insular mentality and a completely different, sharper understanding of security (which is why the September 11 attack dealt such a blow to American psychology). Second, America thinks of itself as a great power, a global policeman – and simply cannot afford to live under the nuclear aim of some impoverished East Asian country.

Therefore, the United States abandoned the policy of ignoring North Korean affairs, after which it was forced to choose between two options: bombing or negotiating.

Iran next in line

Trump assures that he was ready for the first, but the presence of the DPRK with a missile and, possibly, a compact nuclear charge deterred the Americans. As a result, they agreed on the second, and after several months of “nuclear alarm” in June 2018, the American president and the North Korean leader, in the words of CNN, “after five hours of unprecedented and surreal negotiations, agreed on a compromise. Kim does not threaten the Americans (including ICBM tests), and Trump does not bomb Pyongyang and does not prevent him from developing relations with Seoul.”

Take Iran, for example – the Ayatollahs refuse to make any compromise with the United States and wind down their peaceful, legitimate nuclear program.

International pressure will not help the Americans – the European allies of the United States (Great Britain, Germany, France) have sided with Tehran and do not even allow the Americans to restore the arms embargo against the Islamic Republic. The Iranians have long been accustomed to sanctions. It is dangerous to punish Iran by military means using conventional weapons – Tehran will immediately launch a retaliatory missile strike at American military bases in the region, as well as “floating coffins” (ships and aircraft carriers in the Persian Gulf). So the only option for pressure remains – the threat of a nuclear strike.

The problem is not even that these threats are immoral. And the fact is that by threatening (and openly) with nuclear weapons either a non-nuclear power or one that does not pose an existential threat to America, the United States is behaving extremely irresponsibly. They are destroying the remnants of the nonproliferation regime, encouraging other countries to obtain nuclear weapons as quickly as possible and move in relations with the United States to a system of a guaranteed retaliatory strike. And as a result, thanks to American irresponsibility, we will have a wonderful new world, where every other country will have nuclear weapons.

Taking into account the degree of development of a number of countries, as well as the level of consciousness of their elites, we will come to a situation where nuclear weapons will cease to be the most effective modern means of preventing a major war, turning into a method of pressure, an instrument of blackmail, and even a weapon of punishment for an unpleasant neighbor.