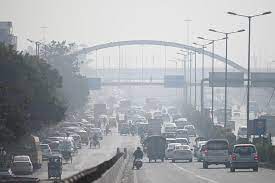 Thick smog has caused New Delhi to shut down its schools and colleges indefinitely in a bid to fight toxic air pollution that is consuming the city.

Photos on the social media shows thick smog engulf the whole city of New Delhi in India as authorities mull over imposing what is being termed as a blanket pollution lockdown on the city of 20 million people. This is making parents even more depressed; They say they have just got out of the Covid lockdown to be imposed by another where the children are already missing on their lessons.

Smog and toxic air is reaching such unprecedented levels that authorities are telling millions of government employees to work from home and avoid the health danger to the lungs caused by breathing such toxic waste. Construction workers are being told to stay at home as well as well as other employees in different economic sectors. But the government of the Indian state maybe dragging their feet.

This is actually coming all the way from the top from India’s Supreme Court who made the indefinite decision till the State government of New Delhi comes up with practical, effective solutions to deal with the smog and pollution danger that could cause another deadly health epidemic.

Nobody is really sure of what causes such dense pollution at this time of year. There are off course much finger pointing at Indian farmers. One tweet blogger says at this time of year everybody in India knows that during the winter months the main cause of pollution is stubble burning in such places as the Punjab and Haryana in the north of the country.

He said the problem is to do with poor air quality brought on about by road dust from construction and demolition as well as car pollution and these tend to be permanent which is why they must be tackled. Until that is done New Delhi could well be under permanent “pollution lockdown”.