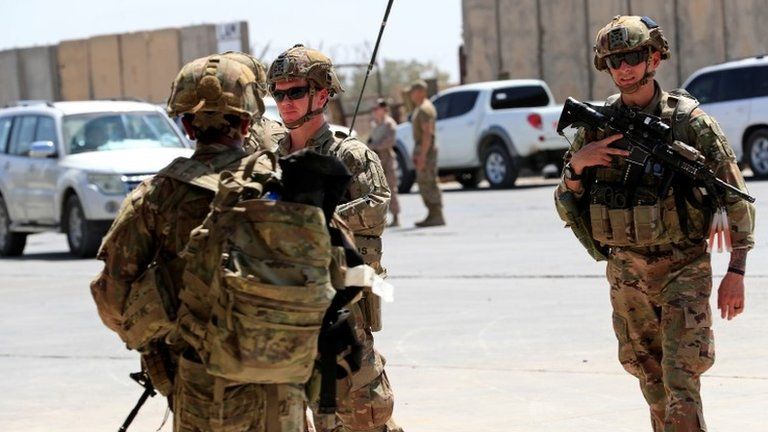 Withdrawing from war zones usually doesn’t end our government’s role in a war. U.S. forces are often just relocated to a neighboring country and expected to continue the same mission from a new base. Shortly before leaving office, Trump ordered the withdrawal of US troops from Somalia, where they have been working with the government in Mogadishu in their war with Al-Shabaab. The withdrawal finished in late January, but now those troops are still fighting Al-Shabaab from their new homes in Kenya and Djibouti. Military Times reported last month on the new arrangement: “Three months after the completed drawdown, senior US Africa Command leaders say that they are essentially doing the same work, but “commuting” from Europe and other East African countries to get it done.” Instead of resisting withdrawals from countries where the US is waging open-ended wars, the military is simply continuing the wars from new locations. Because there is no change to the underlying policies, the troops move, but the wars continue.

The “commuter” approach to warfare represents a new challenge for bringing America’s wars to an end, and it is not limited to Somalia. The Biden administration has been trying to find bases in nearby Central Asian countries where US forces leaving Afghanistan can be stationed. The purpose of using these bases is so that the US military can continue to launch strikes in Afghanistan. As this report from The Wall Street Journal puts it, “US military commanders want bases for troops, drones, bombers and artillery to shore up the Afghan government, keep the Taliban insurgency in check and monitor other extremists.” This will create the rather absurd situation of ending the US military presence in Afghanistan without ending US military action in that country. It isn’t ending a war if you continue to drop bombs on the same enemies.

The Biden administration remains hung up on the idea of preventing Afghanistan from becoming a “safe haven” for terrorists in the future. The US can’t fully extricate itself from the war in Afghanistan if it keeps looking for excuses to take military action there. Until our political leaders recognize that the threat to the United States coming from Afghanistan is minimal, we will be stuck with a policy that keeps our military at war in that part of the world indefinitely. Withdrawing US troops from Afghanistan was the right move, but if the US keeps fighting a war there anyway it defeats the purpose of the withdrawal.

When Biden announced the withdrawal from Afghanistan, some opponents of the war praised the decision because it repudiated the logic of forever war. Unlike his predecessors, Biden refused to insist on a “conditions-based” withdrawal because he correctly saw that this guaranteed that the US could never leave. But Biden didn’t reject the central premise of the “war on terror,” which is that the US military needs to be permanently engaged in hostilities in various parts of the world in the name of counter-terrorism. Our government will still be waging an endless war until it abandons this basic assumption that it has followed since 2001.

The US role in Somalia’s conflict is one of the consequences of this sprawling commitment to counter-terrorism, and the war there has been just as unsuccessful as our open-ended wars elsewhere. Like many other US military missions, the war in Somalia is fought under the expansive umbrella of the 2001 Authorization for Use of Military Force (AUMF), and our role in that war has never received any serious scrutiny or oversight from Congress. As Elizabeth Shackelford noted in an op-ed last month, “Billions of US dollars later, al-Shabaab remains a violent force and the local military still not capable of providing for the country’s defense. Ten years on, Congress has never debated whether Somalia posed a threat sufficient to justify the cost and risk of deploying there.” US involvement in Somalia’s war is on extremely shaky legal ground, and it is only because Al-Shabaab is considered to be an “associated force” of Al Qaeda that the old AUMF even applies to them. Al-Shabaab may pose a serious threat to the Somali government, but it is ludicrous to suggest that it poses a threat to the United States. This is an unnecessary war against people that cannot threaten our security, and the legal authorization for it has been stretched beyond all recognition.

US involvement in wars like the one in Somalia continues because of inertia and because these wars take place in almost total obscurity. It is doubtful that most Americans even know that our military is fighting in Somalia, and it is even less likely that they would know why. It isn’t possible to hold our government accountable for its foreign policy decisions when critical decisions about committing the US to fight in another country’s war are kept out of the hands of the people’s representatives. It isn’t enough simply to pull troops out of a country. Our government has to commit to ending the militarized counter-terrorism policies that it has been pursuing for the last twenty years, and we have to demand that our representatives reclaim the authority that they have surrendered to the executive.