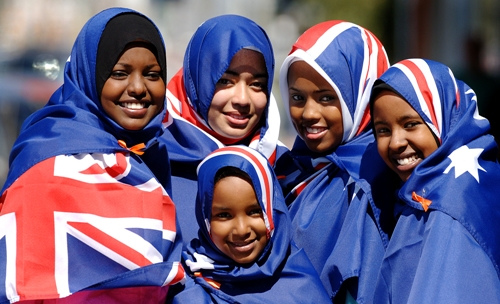 Hussein Haraco, who is originally from Somalia, came to Australia in 2001.

You probably haven’t heard his story because, by Mr Haraco’s own account, his was a “very smooth transition”. Which may be something of an understatement.

In the 17 years he has been in Australia, Mr Haraco has never worked for anybody – but he has employed many others.

With a PhD in economics, Mr Haraco quickly set about starting his own business. He imports food and drinks, deals in real estate, and runs a pizza and billiards parlour.

He works hard to ensure other African-Australians can enjoy the kind of success and prosperity that he and his family have.

The businessman was one of 22 African-Australians from a diverse range of professions who spent the last two years coming up with a plan to improve the lives of other Victorians of African heritage.

On Saturday they presented their recommendations to the state Multicultural Affairs Minister, Robin Scott.

The 12-year plan outlined five goals which aim to help African-Australians improve their economic prosperity, levels of education, participation and engagement with the broader community and – most importantly for Mr Haraco – get jobs.

The Somali-Australian businessman was one of several members of the working group which devised the plan who praised the state government for asking African-Australians to put forward their own ideas.

“This has never happened before,” he said.

But he also echoed another common sentiment among the group when he said the time for talking was now over, calling on the Andrews government to invest in their African Communities Action Plan in the upcoming budget.

“$10 million would be a reasonable figure to start with,” he said.

“That would be for the implementation process next year, then we’ll see how it’s working and we can evaluate it and see if we need to increase it.”

For Ahmed Hassan, who was also part of the working group, every day of inaction would see more young people “fall through the cracks” in society.

“The Somali community is over-consulted, I don’t think more consultation is the answer now … we’re looking for action and we’re calling on the government to act,” he said.

The action plan speaks to the importance of giving young African-Australians a voice – a cause to which 21-year-old Mr Hassan is dedicated.

After leaving high school in North Melbourne, he set up a rehabilitation and employment program for disadvantaged youth which now comprises more than 10 people who have helped thousands.

“We’re building the next generation of young leaders,” he said.

Mrs Mohamed is helping bring African sauces and dishes like soor – polenta made from maize flour – sambusa and injera bread to the mainstream, as well as African-designed clothes.

At the same time she raised four children, one of whom is a now nurse, while another two daughters have just finished studying electrical engineering and biomedical science.

North Melbourne-based youth worker Ahmed Dini, 29, said children like Ms Mohamed’s were an example of the what could be achieved by providing opportunities.

“If this is done the right way, if the right resources are put in place, I’m in no doubt that the African-Australian community will make a positive commitment and will have positive outcome for this great democracy.”