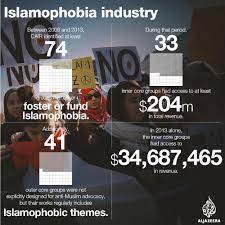 Excerpts of article originally published under the title “Ilhan Omar and the Islamophobia Industry.”

It was bad enough when Secretary of State Antony Blinken invited the U.N. to investigate racism in the U.S., but now Representative Ilhan Omar and 24 of her fellow Democrats want him to create a special envoy to investigate and combat “Islamophobia,” which they call “a genuinely global problem that the United States should tackle globally.” …

[Omar] has an entire industry supporting her — one that has evolved to discover, and in many cases fabricate, offenses against Muslims and Islam. It consists mostly of lawyers who specialize in cases of alleged anti-Muslim discrimination and academics who write books and form programs and initiatives to publicize “Islamophobia.”

In a book titled The Islamophobia Industry (2012), Nathan Lean claimed that there is a massive, global anti-Islamic movement. In the book’s foreward, John Esposito, founder of Georgetown University’s Prince Alwaleed Center for Muslim-Christian Understanding, describes it as a “multi-million-dollar cottage industry of fear mongers and the network of funders and organizations that support and perpetuate bigotry, xenophobia, and racism, and produce a climate of fear that sustains a threatening social cancer.”

Of course Esposito has it entirely backward. The real industry is the network of academics, lawyers, activists, and funders who libel and slander critics of Islamism, even those who cautiously stipulate between Islam and Islamism. It is filled with the same people who have been warning since 9/11 of an always-imminent anti-Muslim “backlash” that never comes.

The legal component is spearheaded by the once-venerable Southern Poverty Law Center, and the academics take their cues from Georgetown University’s Bridge Initiative (where Nathan Lean was once director and John Esposito reigns). The true Islamophobia Industry is not a cottage industry but a massive one consisting of thousands of people who make their living by promulgating fear of “Islamophobia” and defending its alleged victims. While stifling discussion of Islamism, they keep themselves on the receiving end of grants, donations from wealthy Muslim patrons, and lifetime tenured employment.

The SPLC has spent most of the 21st century tarring critics of Islamism as fringe, right-wing Muslim haters. Its self-righteous blinders have led it to reflexively libel even accomplished scholars. After it labeled Maajid Nawaz and the Quilliam Foundation as anti-Muslim extremists, it was forced to apologize and pay Nawaz millions of dollars in damages.

Likewise the Bridge Initiative staff smears conservatives, journalists, academics, and even Muslim analysts (such as Zuhdi Jasser and Tarek Fatah) and former Muslims (such as Ayaan Hirsi Ali) whom they deem “Islamophobic.” Both groups display profound hypocrisy and a lack of self-awareness by condemning purported Islamophobic groups for keeping lists of Islamists — which they publish in their own lists of scholars, conservatives, and organizations guilty of spreading Islamophobia. The Bridge Initiative calls its lists “factsheets,” and the SPLC published a now-deleted “Field Guide to Anti-Muslim Extremists.”

Other influential members of the industry include the Center for American Progress, which produced a report titled “Fear, Inc.,” analyzing the alleged “Islampohobes,” and the Al Jazeera network, which produced a documentary titled Islamophobia Inc.

Wokeism was just the thing the Islamophobia Industry needed to reinvigorate itself and seem as relevant as it did in the immediate aftermath of 9/11. It has latched onto the anti-racist zeitgeist through yet another academic invention called “intersectionality.” This is where Ilhan Omar comes in playing her role with aplomb. Being a black Muslim woman who came to the U.S. as a refugee makes her intersectionality score quite high. The House’s newest radical Squad member, Representative Cori Bush (D., Mo.), knows this, as her recent defense of Omar ended with “Stop with the anti-Blackness and Islamophobia.”

For the moment, the European version of the Islamophobia Industry is far ahead of the American one. The European Court of Human Rights has ruled that speaking disrespectfully about Islam is not protected speech. In England, people who placed bacon at mosques got prison sentences, and one prison official was fired in 2001 after mocking Osama bin Laden. In 2017 a party in Cambridge was raided by police after a song mocking bin Laden was overheard by a police officer who deemed it a “racial hatred incident.” Scotland’s “Hate Crime and Public Order Bill” was introduced in April 2020 by Justice secretary Humza Yousaf who sought to punish Islamophobia because, as he put it, “freedom of expression is not an absolute right.”

If the Islamophobia Industry gets its way — and Blinken appoints someone like Yousaf as the new special envoy — we will see similar attempts to limit freedom of expression in the U.S. and abroad. In the meantime, the cry of “Islamophobia” remains a handy offensive defense whenever someone like Ilhan Omar lets her guard down and shows her true beliefs.

A. J. Caschetta is a principal lecturer at the Rochester Institute of Technology and a a Ginsburg-Milstein fellow at the Middle East Forum.