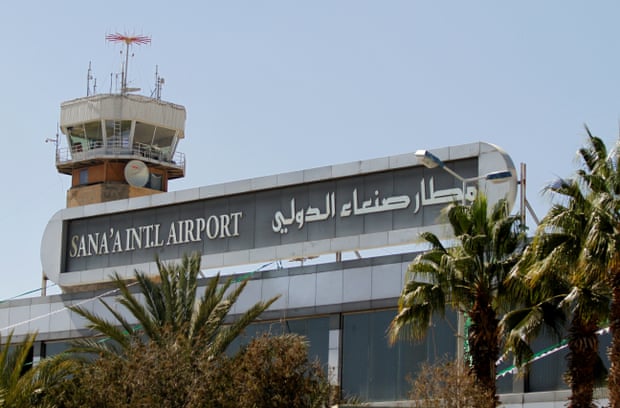 Patients requiring life-saving treatment to be allowed to fly, but aid agencies say imports of medicine and humanitarian aid crucial

Aid agencies have welcomed news from the Saudi-led coalition in Yemen that it will allow some flights out of Houthi-held Sana’a, for Yemeni civilians requiring life-saving medical treatment.

As many as 32,000 people in need of overseas medical care may have died since the airport closed to commercial flights in August 2016, according to ministry of health estimates. The figures have not been verified independently, but in 2017 the UN estimated that up to 20,000 people had been denied access to potentially life-saving healthcare due to restrictions on airspace.

The war has left Yemen’s already fragile health system weakened. Fewer than half of health facilities are fully operational, medicine is in short supply and 80% of the population, about 24 million people, are in need of humanitarian assistance. About 10 million of them are on the brink of starvation.

Secretary general of the Norwegian Refugee Council (NRC), said: “For the last three years the Sana’a airport closure has been a death sentence for thousands of women, children and men who died prematurely because they were unable to get treatment abroad. Today’s move comes too late for them, but will hopefully save the lives of other Yemenis caught in the conflict and with no available treatment in the country.”

The NRC is one of several aid agencies that have lobbied for the reopening of the airport for medical flights and for humanitarian supplies.

“We hope all warring parties and their sponsors seize this moment to turn the tide against this war,” said Egeland. “The blockade must end: restrictions on humanitarian goods, commercial imports of food, fuel and medicine, and the closure of seaports, have thrown Yemen down a dark valley of intolerable suffering. Over 10 million people are on the brink of starvation. The conflict needs to end so that millions of families can start rebuilding their lives.”

The closure of Sana’a airport means the only option for sick patients in and around Yemen’s largest city requiring urgent treatment abroad is to travel by road to Aden or Seiyun in the south to fly out of the country. It is an arduous route that can take up to 24 hours and involves crossing multiple checkpoints.

Aaron Brent, Yemen’s country director for NGO Care, described the announcement of the airport reopening as a “very positive signal” that parties to the conflict are taking the wellbeing of Yemen’s people seriously. Brent said: “While opening the airport to medical patients will be a critical first step, the Saudi-led coalition must go one step further and open it up to commercial flights, which will bring in commercial and humanitarian goods and give Yemenis the freedom to travel overseas – something that in most countries is taken for granted.”

Flights for Yemeni civilians needing medical care abroad will be overseen by the World Health Organization (WHO), coalition spokesperson Turki al-Maliki said in a statement released by the official Saudi Press Agency on Tuesday.

A spokesperson for the WHO referred the Guardian to the UN Office for the Coordination of Humanitarian Affairs, but no one was available for comment.

The five-year civil war has left more than 100,000 people dead, most of them civilians, according to relief organisations, and 3.6 million displaced in what the UN has called the worst humanitarian crisis in the world.