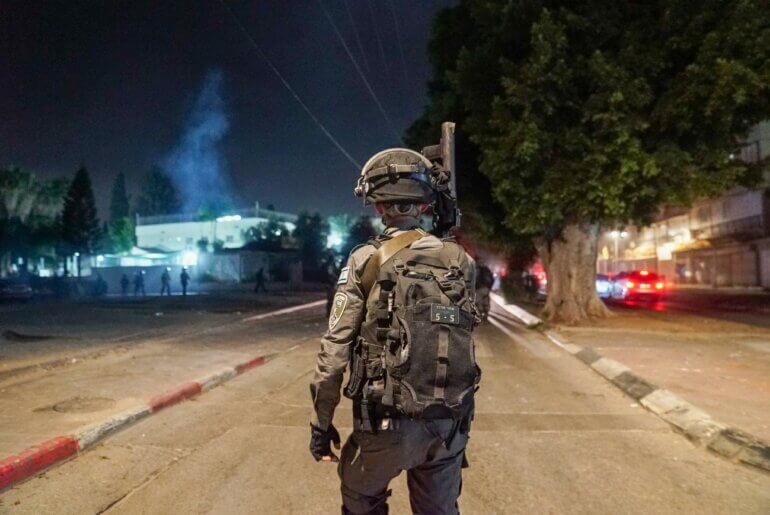 The prevailing consensus among Israelis that Palestinian nationalism had been defeated – and thus that a political solution to the conflict was no longer necessary – lies in tatters. And even as the violence escalates, it has become clear to both sides that the era of glorious wars and victories is over.

TEL AVIV – The sudden eruption of war outside and inside Israel’s borders has shocked a complacent nation. Throughout Binyamin Netanyahu’s 12-year premiership, the Palestinian problem was buried and forgotten. The recent Abraham Accords, establishing diplomatic relations with four Arab states, seemed to weaken the Palestinian cause further. Now it has re-emerged with a vengeance.

Wars can be triggered by an isolated incident, but their cause is always deeper. In this case, the trigger, the eviction of Palestinians in favor of Israeli nationalists in the Sheikh Jarrah neighborhood of East Jerusalem, touched all the sensitive nerves of the Israeli-Palestinian conflict. Israel’s occupation of East Jerusalem, its humiliating control of access to the Al-Aqsa mosque, the ever-present memory of the 1948 Nakba (the displacement of 700,000 Palestinians when Israel was founded), and the grievances of Israel’s Arab minority are all fueling the current flare-up.

It may be true that the contested real estate in Sheikh Jarrah did belong to a Jewish family before 1948. But Palestinians saw the incident as part of Israel’s unrelenting drive to “Judaize” Jerusalem, and a striking injustice, because the state of Israel was built partly on the abandoned properties of Palestinian refugees. While Jews are entitled to reclaim property they owned before Israel’s founding, Palestinians may not. Those facing eviction in Sheikh Jarrah cannot recover the homes in Jaffa and Haifa that they once owned.

On the face of it, the latest escalation of violence is following the template of all inter-ethnic wars. Muslims observing Ramadan shouted nationalist slogans and clashed with Israeli right-wing groups chanting “Death to the Arabs.” The Israelis haughtily marched with their national flag on Jerusalem Day, marking Israel’s capture in 1967 of East Jerusalem and the Temple Mount, the site of the biblical Second Temple, and of Al-Aqsa, completed in the year 705. Battles in and around the Al-Aqsa compound erupted, with worshipers inside throwing stones at the Israeli police, who responded by firing rubber-tipped bullets and other projectiles, wounding hundreds.

But the young Arab protesters could claim victory, for they forced the postponement of an Israeli Supreme Court ruling on the evictions in Sheikh Jarrah. They also forced the police to change the route of the Jerusalem Day march away from the Muslim Quarter in the Old City.The flare-up spilled over into pre-1967 Israel, where Islamist groups incited young Israeli Arabs. Mixed Jewish-Arab cities that were supposed to be exemplars of coexistence, such as Acre, Ramla, Jaffa, and Lod, erupted in an orgy of violence and vandalism. Lod was practically taken over by gangs of young Arabs. This was a pogrom, said Jewish residents. An old Jewish woman spoke of memories of Kristallnacht. The mayor of Lod drew the same comparison.

But Jerusalem has emerged as the crucible of conflict. It offered Hamas a golden opportunity to assert its predominance over Israel’s collaborators in the West Bank’s Palestinian Authority and sweep away PA President Mahmoud Abbas’s moribund leadership. Under Israeli pressure, Abbas had just canceled legislative elections for fear that Hamas, which has ruled Gaza since 2006, would win and extend its control to the West Bank.

Abbas framed his decision as a protest against Israel’s refusal to allow the Palestinians in East Jerusalem to participate in the elections. But the truth is that the PA’s presence in East Jerusalem had practically vanished, with the vacuum filled by a mostly secular young Palestinian generation that turned the Temple Mount (Haram Al-Sharif to Muslims) into the symbol of their resistance to Israeli occupation.

In the current eruption of violence, Hamas connected all the dots needed to gain primacy in the Palestinian national movement. It positioned itself as the protector of Jerusalem and Al-Aqsa, as the spearhead of the Palestinians’ national and religious struggle against the Israeli-Jewish occupier, and also as the voice of the Arab minority in Israel proper.

Israelis and their complacent government were caught off guard. Hamas conducted an unprecedentedly massive missile attack on Israeli cities. They even launched salvos at Jerusalem and Tel Aviv, sending half the country’s population to shelters. Israelis were left to wonder how their vulnerable home front could withstand a war with Hezbollah, the Iran-backed militia across the border in southern Lebanon. Hezbollah has an arsenal of 150,000 missiles many times more lethal than Hamas’s.

To make its case, Hamas was willing to pay a high price. Israel’s punitive airstrikes on Gaza have been devastating, targeting Hamas military commanders with brutal efficiency. But Hamas knows that in the asymmetric wars of this era, a militia hidden among two million civilians in one of the world’s most densely populated areas has practical immunity from defeat. Hamas also knows that the war’s reverberation throughout the region will force neighbors like Egypt and Hamas’s patron, Qatar, to mediate a ceasefire.

From the debris of Gaza, Hamas will then claim victory, not necessarily on the battlefield, but in the minds of its people. At that point, Hamas will have achieved its main objectives: an utterly discredited PA and heightened prestige as the ultimate protector of Islam’s holy shrines in Jerusalem.

Paradoxically, Netanyahu has no interest in destroying Hamas. Quite the contrary: he has struck an unwritten deal with it against Abbas’s PA, which his governments have consistently done all they could to weaken and humiliate. A Hamas Islamic state in Gaza offers Netanyahu the ideal pretext to reject peace negotiations and a two-state solution. Netanyahu even allowed Qatar to keep Gaza functioning by paying the salaries of Hamas’s functionaries.

Israel certainly cannot claim victory. The fragile coexistence between Jews and Arabs within its borders has been shaken. The prevailing consensus among Israelis that Palestinian nationalism had been defeated – and thus that a political solution to the conflict was no longer necessary – lies in tatters. And even as the violence escalates, it has become clear to both sides that the era of glorious wars and victories is over.