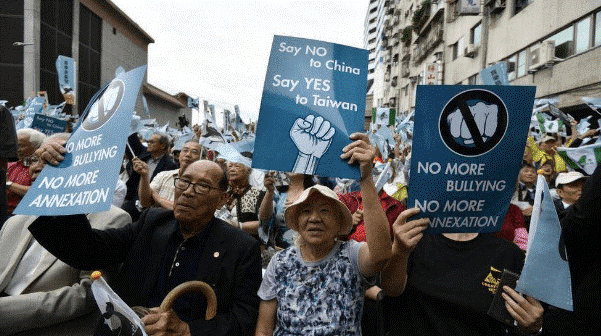 In the wake of rising tensions in the South China Sea, between China and its neighbours, the issue of Taiwan’s sovereignty is once again in the spotlight as Beijing clamps down in an attempt to secure its maritime borders and territorial claims in the region. Do recent developments suggest an end to the ambiguous status quo?

Recent weeks have seen an uptick in diplomatic friction in the Asia-Pacific region as military activity by the United States and China continue to rise as both attempt to assert their positions in the nearby seas. China’s perceived territorial claims have long dominated its approach to the region, the most sensitive being its continued claim over Taiwan. The island nation often faces military provocations by the People’s Liberation Army, such as aerial incursions and clashes in the Taiwan Straits and South China Sea, though the increased frequency of these have strengthened fears of further aggression by China. Beijing’s perception of its “inalienable” right to Taiwan has been generally tolerated by the international community under its ‘One China Principle’, though support appears to be slowly fading.

Since the Kuomintang (KMT) retreat from mainland China in 1949, the island of Taiwan has firmly been held by the Republic of China (ROC) who continued to hold de facto sovereignty over the island. Though the legality of the KMT takeover of Taiwan has long been under question, the ROC was able to maintain its status as representing “China” in the United Nations until 1971, when it lost its seat to the mainland People’s Republic of China (PRC). Without an ROC surrender, the PRC has sought to reduce the political legitimacy of a formally independent Taiwan, through economic and diplomatic coercion in a policy it dubbed the ‘One China Principle’.

Although both countries still view themselves as the legitimate representative of ‘China’, since the 1990s, there has been a rising movement for the formal recognition of a separate Taiwanese independence and identity. A view in Taiwan is that the Republic of China and the People’s Republic of China are both sovereign, thus forming “two Chinas”, or “one China, one Taiwan”. Nevertheless, there are grounds for the notion that the PRC and the ROC/Taiwan have undergone such different paths, that it is impossible to reconcile the growing Taiwanese identity with a singular ‘China’.

In the words of Robert Sutter, “China’s economic, military, and diplomatic leverage over Taiwan increasingly constrains Taipei to follow a path leading to accommodation of and eventual reunification with China.”

The One China Principle, in general, refers to the Chinese Communist Party’s (CCP) position that there is only one “China” and for any political entity seeking to establish diplomatic relations with the PRC, they must support its claim over Taiwan. With the failure of military threats to bring about unification, China has used its growing might to limit Taiwan’s international activities, through economic leverage and diplomatic influence. For example, developmental aid and trade deals with the PRC is often dependent on a country’s acceptance of the One-China Principle. The principle reflects the slow, deliberate and pragmatic approach to accomplishing the objective adopted by the CCP for decades, and has been successful in forcing states to cut their diplomatic ties with Taiwan. Under the principle, the CCP is also quick to shut down any suggestion that Taiwan is independent, an issue that remains at the forefront of cross-Strait relations.

Under the principle, Beijing has been largely effective at weakening the diplomatic capabilities and allies accessible to Taipei when participating with the larger international community. Despite this, the re-election of Taiwan’s president Tsai Ing-wen has shown that Taiwan’s population has only been further determined to gain respect from China. Paradoxically, Xi Jinping’s harsher approach to securing China’s territorial integrity may have further alienated Hong Kong and Taiwan. The increasing divide in economic systems, democratic rights and national identities, has always been a hindrance to a possible reunification and the recent authoritarian push by Xi has only helped solidify the differences between the two sides.

The biggest guarantor of Taiwan’s de facto sovereignty has been the United States, who initially continued to recognise Taiwan as the legitimate seat of government of China until 1979. Despite the lack of formal ties, Taiwan and the U.S. have enjoyed warm political and economic relations, and the rising threat of China has strengthened the relationship between the two.

The U.S. State Department recently issued new guidelines enabling greater diplomatic overtures between U.S. and Taiwan officials, a move that generated significant anger in Beijing as it represents a continued shift away from the ‘one China’ policy. The deepening of relations between Washington and Taipei is a further sign of President Biden’s desire to shift the US’ global focus away from counter-Islamist campaigns to a focus on countering China. Further evidence of this policy shift is that it came days before Biden announced the US’ withdrawal from Afghanistan.

Though the question of American intervention still presents uncertainty to a potential scenario in which China decides to invade Taiwan, Biden’s realigning of the US military and diplomatic focus to the Asian-Pacific region appears to reassure American support of Taiwan for at least the next 4 years. Washington’s and the DPP’s continuing flirtations with formal Taiwanese independence is certainly provocative to Beijing and carries the potential of escalating tensions in the region.

In the short term, despite growing fears and concerns over a possible invasion, such an event is unlikely to occur in the next few years; it remains in Beijing’s best interests to uphold the status quo. A full-scale invasion to capture Taiwan could be detrimental to China’s current position and reduce the goodwill it possesses in Taiwan and internationally. The recent military posturing falls in line with the standard M.O. of the CCP, as the strong rhetoric carries weight to both its local audience and in the diplomatic arena. Though the majority of the Taiwanese have expressed no desire to attain formal recognition of its independence, the increasing divide between the two countries suggests the need for a resolution to the ‘One China Principle’. Nevertheless, the status quo remains, for the time being, favourable to both sides over the ‘formal’ declaration of an independent Taiwan. Favourable to Beijing, because it can easily maintain its claim that Taiwan is a province, and favourable to Taipei because it avoids provoking a possible invasion by the PRC.