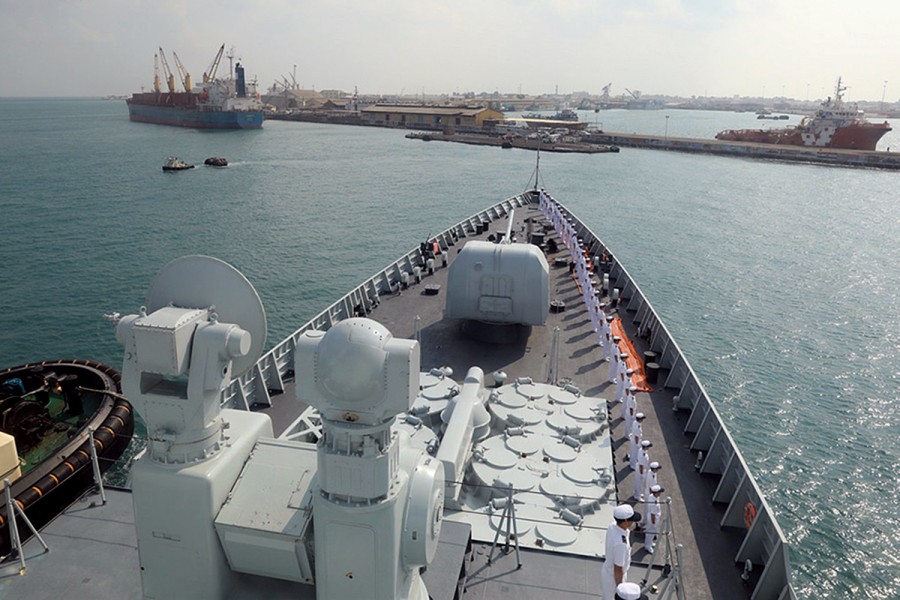 The Chinese destroyer Haikou sails into the port of Djibouti in 2017 for a visit. The base China has built in the African country is now capable of hosting aircraft carriers, U.S. Africa Command’s top leader has said.

China, which opened its Djibouti base in 2017, has steadily grown its footprint and operates just seven miles from Camp Lemmonier, the U.S. military’s operational hub in the Horn of Africa.

“Their first overseas military base, their only one, is in Africa, and they have just expanded that by adding a significant pier that can support even their aircraft carriers in the future,” AFRICOM’s Gen. Stephen Townsend said Tuesday. “Around the continent they are looking for other basing opportunities.”

Djibouti, a small but strategically important country that sits at the southern end of the Red Sea, has long hosted various foreign militaries. France, Italy and Japan are among the countries with small outposts there.

But China’s buildup is on a much larger scale, Townsend said. The base is turning into a “platform to project power across the continent and its waters,” Townsend said in a posture statement submitted Tuesday to the House Armed Services Committee.

China has two aircraft carriers in service — the Liaoning, a heavily modified, unfinished ex-Russian carrier, and the Shandong, a modernized version of the Liaoning. A third carrier could be ready by 2024 and is expected to be the first equipped with catapults that would allow it to launch heavier planes, a Congressional Research Service report said in March.

China also has stepped up military training efforts and arms sales in Africa, but those efforts are of less concern and sometimes end up “working out OK for us” because of the poor quality of Beijing’s gear and military advice, Townsend said.

Still, China has emerged as the dominant outside economic force in Africa. Its investments in Africa are outpacing those of the U.S. and its allies, “as they seek resources and markets to feed economic growth in China and leverage economic tools to increase their global reach and influence,” Townsend said.

“They are literally everywhere on the continent,” Townsend said.