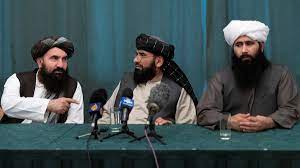 The Taliban’s spokesman Suhail Shaheen has told the BBC that they are waiting for a “peaceful transition of power” and that they want it to happen “as soon as possible”, calling the country’s President Ashraf Ghani and other leaders to work with them, Reuters reported on Sunday.

The spokesman also stated that the extremist group is seeking an inclusive Afghan government where all Afghans will be able to participate, according to Reuters, adding that they plan to respect the rights of women and will ensure access to education and work.

Women will have to wear the hijab but will be allowed to leave their homes alone.

He added that the media will be allowed to criticize anyone but should not indulge in character assassination and that policy punishments like executions, stonings and amputations will be up to courts.

“We assure the people, particularly in the city of Kabul, that their properties, their lives are safe,” Shaheen said in an interview with the BBC.

“Our leadership had instructed our forces to remain at the gates of Kabul, not to enter the city.

“We are awaiting a peaceful transfer of power,” he said, adding the Taliban expected that to happen in a matter of days.

Afghanistan: The Missing Story on the US Withdrawal