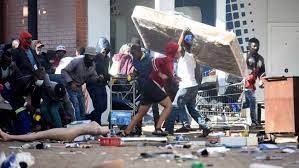 Well, isn’t this a shocker? The World Economic Forum (WEF) has published its Global Risks Report for 2022, assessing the biggest threats to over 100 countries – and the forecast for South Africa is grim.

The number crunchers at the WEF have identified five major risks for each nation featured in the index. Economic, environmental, and geopolitical factors are all considered by the researchers, and in amongst the challenges facing Mzansi in the years ahead, a total state collapse has flown to the top of the list.

The term, which refers to the rule of law completely failing and governments dissolving as a result of political upheaval, is one that causes great anxiety – and the WEF aren’t using it lightly.

In the past six months, South Africa has experienced deadly riots, attacks on its national key points, and of course, an alleged act of arson at Parliament. State collapse, therefore, is firmly in the picture unless SA pulls itself together.

What are the biggest risks facing South Africa in 2022?

Several other risks have been identified for our Republic:

State collapse, economic stagnation, and a lack of work opportunities: South Africa stands at a crossroads…

South Africa also forms a clutch of countries that face ‘social cohesion erosion’ in 2022. This will see levels of poverty expand, and the gap between the wealthy and the rest of us is expected to grow.

“Social cohesion erosion is a top short-term threat in 31 countries—including Argentina, France, Germany, Mexico and South Africa from the G20. Disparities that were already challenging societies are now expected to widen – 51 million more people are projected to live in extreme poverty compared to the pre-pandemic trend.”