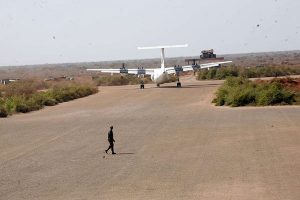 Somaliland government is excited at the prospect of Uganda Airlines adding Hargeisa as parts of its new destinations.

Uganda Airlines announced this week it will add three more regional routes to its schedule in the coming months to bring the number of destinations to seven.

One of the destinations the Uganda national carrier is looking at is the Somaliland capital Hargeisa.

“This is great news not only for Somaliland but also to the entire East African region. We cannot wait for the first Uganda Airlines flight to touch down in Hargeisa,” an official from the Ministry of Foreign Affairs in Somaliland stated.
“It is bound to boost trade and interaction between Entebbe and Hargeisa and even beyond, and also open up Somaliland to Ugandans” the official added.

Uganda will be the second national carrier from Africa to make direct flights to Hargeisa after Ethiopia Airlines which has two flights a day landing at the Mohammed Egal International Airport in Hargeisa.

Kenya Airways has also been mulling over introducing direct flights to Hargeisa. A team of Kenya Airways technical staff has visited the national airport in Hargeisa but no official communication has come from the Kenya Airways management.

Somaliland envoy to Kenya Bashe Omar has been on the forefront to have Kenya Airways introduce the flights to Hargeisa saying Nairobi stands to gain so much if that is done.

“We have dozens of businessmen who operate between Hargeisa and Nairobi and have to connect through Addis Ababa in Ethiopia,” observed Omar.

Omar said trade between Kenya and Somaliland has also stagnated because of the absence of direct flights.

Early this week, Uganda Airlines received two new Bombardier CRJ900s to grow its fleet to a total of four aircraft.

While announcing Hargeisa as one of its intended destinations, Uganda Airlines CEO, Cornwell Muleya, said the addition of the new fleet is a big boost to their operations especially in the region in a bid to dominate the industry.

“With the addition of the new aircraft to the fleet, the carrier will expand its route network to cover several other destinations in Southern and Central Africa,” Muleya said.

The new routes that will be added on the new schedule are Kinshasa, Zanzibar, Asmara in Eritrea, Hargeisa (Somaliland), Lusaka, Harare, Johannesburg, Djibouti and Addis Ababa.

The airline’s Commercial Director Jenifer Bamuturaki also said, the airline will make its inaugural flight to Bujumbura, Burundi at a promotional cost of $255 and on October 11, it will fly to Kilimanjaro, Tanzania and to Mombasa in Kenya at a cost of $165 and $312 respectively.

The national carrier commenced commercial operations on August 28 and is currently operating direct flights from its hub in Entebbe to and from Nairobi, Mombasa, Dar es Salaam, Kilimanjaro, Juba, Bujumbura and Mogadishu.