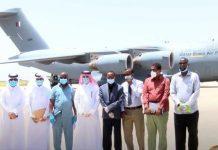 An on official visit to Hargeisa delegation from the government of Qatar led by its envoy to Somalia Ambassador Hasan bin Hamza Hashem was given a very low scale reception by the administration of president Bihi.

The Qatari team which was in Hargeisa to deliver its government’s donation of covid-19 kits was received at the Egal international airport by a Somaliland team composed of the Director general ministry of health and the chairman of the national disaster management agency  among others of the ilk.

In comparison a week ago a similar mission from the United Arab Emirates government was met at the same venue by a Somaliland team composed of the finance minister, health minister and their religious affairs counterpart among other senior officials.

This huge disparity in protocols accorded the two Gulf countries is a clear indicator of where official Somaliland sympathies lie.

The governments of Somaliland and the UAE enjoy very good partnership especially with the Emiratis having committed over 400 million USD towards management and development of the Berbera port, through its global enabler DP World.

The Emiratis and Somaliland also have a military contract for construction of an UAE base in Berbera which though a couple of years old is yet to take root.

For Qatar its relations with Hargeisa collapsed on the onset of the Gulf Countries Crisis that pitted it against Saudi Arabia and the UAE.

Somaliland backed the two GCC powers leading to broken relations with Qatar which scored high with the federal government of Somalia.

Despite the lackluster reception the qataris one positive outcome is that this time around the government in Doha has seen it fit to deal with counterparts in Hargeisa directly opposed to past instances in which such delivers were made by  that country’s charity organizations.

With Qatar dispatching Amb Hashem an experienced envoy to Somaliland overtures by Doha are seen as those pursuing resumption of diplomatic relations.

That being so and much welcomed the irony is the plane bearing the covid-19 kits donation from Qatar flew directly to Mogadishu upon departure from Hargeisa.