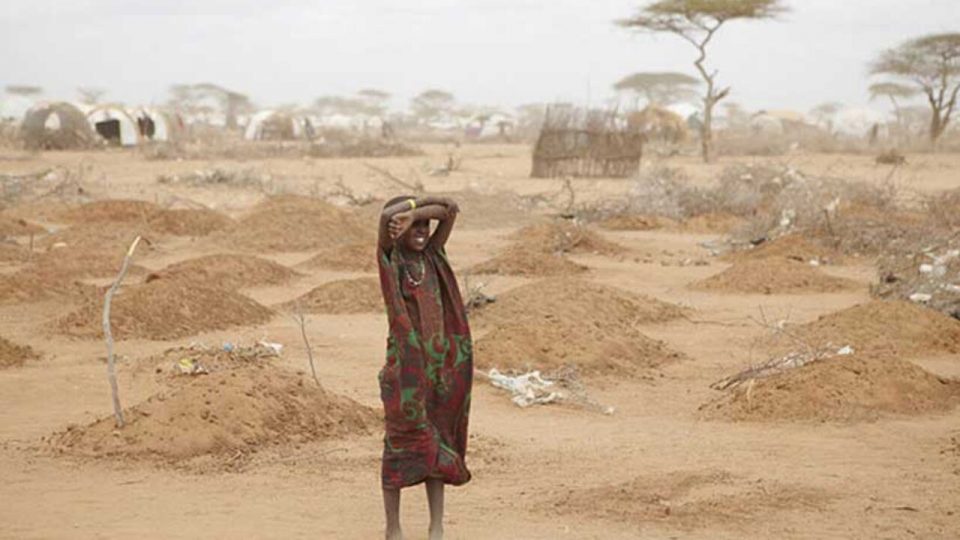 Tiara Sahar Ataii
The international community’s failure to address the climate crisis is epitomised in Somalia, where the worst drought in decades has left 20 million people facing starvation. If this is an omen, it is a grim one, writes Tiara Sahar Ataii. A Somali woman drinks water at a water distribution point at one of the 500 camps for internally displaced persons on February 13, 2022. Insufficient rainfall since late 2020 has come as a fatal blow to populations across rural Somalia. [Getty]

Working in humanitarian response has taught me that very few things are certain. One of the few things I know to be true, however, is that the climate crisis is here, and climate displacement will be one of the defining features of this century.

You wouldn’t know it for a lack of media coverage or interest from the international community, but the evidence is clear – studies have shown that for every additional one degree Celsius rise in the global temperature, one billion people will be confronted with a choice: attempt to survive in unliveable heat (and potentially die trying), or become forcibly displaced.

Somalia, which finds itself at the frontlines of the climate crisis, affords us a glimpse of the world’s future. 2019 saw a devastating drought that resulted in 370,000 Somalis being displaced in search of water. 2020 came to a close with Cyclone Gati – the first ever hurricane-force cyclone to hit the Horn of Africa.

“Studies have shown that for every additional one degree Celsius rise in the global temperature, one billion people will be confronted with a choice: attempt to survive in unliveable heat (and potentially die trying), or become forcibly displaced”

With this increased precipitation, vegetation bloomed in arid habitats where desert locusts feed, bringing about a locust infestation of such magnitude that it grounded passenger planes. Today, the worst drought in 40 years leaves 20 million people at risk of starvation.

Climate crises have set off a dizzying chain of reactions that reach into the daily life of almost the entire population. On top of the very real threat of famine, families have been separated as men seek out work in urban centres whilst women and children gravitate towards aid distribution points elsewhere. Children drop out of school to find water, and child marriage has sky rocketed as parents seek out dowries that can help to feed their other children.

And yet, so little has been done. Just 4.6% of the funding needed to avert famine has been raised, compared to 46.9% of aid needed for Ukraine.

The first issue is that funds for aid are raised based on public interest – namely, the ‘CNN effect’. Coined in response to US intervention in Iraq, Somalia, and Kosovo in the 1990s, the term refers to the role that broadcasters play in sensitising the public to crisis, which becomes a major factor that decides whether the international community responds.

Disbursing funds based on public interest rather than need reinforces massive global inequities. Populations with less digital capital (for example, those who do not speak English, or countries with lower levels of digital inclusion) are less likely to hit the news, and therefore less likely to benefit from donations meted out by governments who control the purse strings.

This is especially pertinent for the climate crisis, since waiting for public interest to peak – often due to harrowing videography – means that we essentially ignore all climate crisis warnings until the famine is already underway, as we are doing now in Somalia.

Even when funds are channelled into aid, the humanitarian ecosystem in its current format is simply unable to meet the challenge. The largest funders of humanitarian action are governments in the Global North who prioritise quantity over quality to maximise the number of people reached, making for impressive headlines for their taxpayers by the end of the electoral season.

This means that a lot of humanitarian aid remains intrinsically short-term. Of the funds raised for Somalia, the vast majority will go into provision of plastic tents and single-use hygiene products that won’t help make communities resilient in the long-term, and will only further pollute the environment.

Working with one of the UN agencies’ missions to Somalia, I saw first-hand that, to address communities’ vulnerability to repeated climatic shocks, what was desperately needed was large infrastructural work such as building dikes alongside rivers that frequently burst their banks or water corridors in camps that frequently flood due to waterlogging that is as common as it is easily addressed.

However, it proved almost impossible to fundraise for infrastructural work that requires large budgets and long implementation periods, despite being more cost-effective in the long term. In the first quarter of 2022, for example, only emergency shelters, which have a lifespan of just six months, were provided to internally displaced peoples in Somalia. Not a single shelter with a lifespan surpassing 6 months was provided.

“When humans kill other humans, our instinctual refusal of injustice within each of us galvanises action. When humans’ lives are ruined by climate crisis, we find it much harder to ascribe guilt to any one perpetrator”

There is little incentive for donor governments to reform, since they are only answerable to taxpayers who are far removed from the work at hand. Humanitarian organisations are in turn answerable to donor states – and not to those who receive their services.

In light of the fragile security situation in Somalia, humanitarian organisations often rely upon subcontractors and implementing partners (not least because doing so is often cheaper for the large iNGOs and UN agencies that have much larger overheads), but this means that Somalis remain at a distance from those dictating which services are provided.

At the core of our inertia to implement reform on how we disburse and use funds for humanitarian response lies our misunderstanding of causality. When humans kill other humans, our instinctual refusal of injustice within each of us galvanises action. When humans’ lives are ruined by climate crisis, we find it much harder to ascribe guilt to any one perpetrator.

But make no mistake: we in the Global North are causing this. Somalia contributes between 0.03 to 0.08 percent to total global emissions, and is yet is on the crossfires of climate change. The language of war is purposeful – Somalis are not ‘vulnerable to climate change’ as most indices term it – they have been made vulnerable to the Global North’s consumption habits.

In parallel to addressing our own climate footprint, more funds are needed, and they must be used much more wisely. Climate displacement and famine will soon become the norm across the globe – we therefore can’t afford to spend money on short-term forms of aid that do nothing for climate resilience.

The human suffering is mammoth now – and yet, we will never again have a caseload this small. If we can’t get it right in the Horn of Africa now, we’ll struggle when billions more humans are in need of humanitarian aid.

Tiara Sahar Ataii has worked in humanitarian response for the UN and major NGOs in 11 countries. She founded SolidariTee, which fights for refugee rights. She is also part of the 2022 ‘Forbes 30 under 30’.