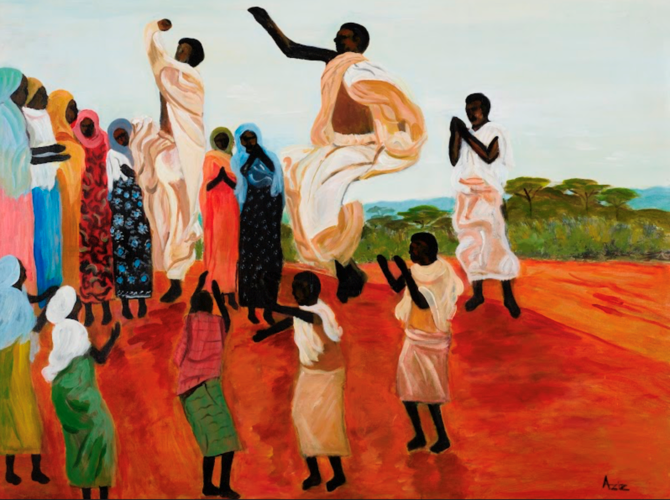 His talent won him a scholarship in 1968 to study architecture at the University of Florence. (Supplied)
Denise Marray

LONDON: Mogadishu, Florence, Tuscany, Sardinia, Minneapolis. Somali artist Abdiaziz (Aziz) Osman has called all these places home. In terms of the mastery and execution of his art it is his years spent in Italy, he says, that proved most influential, while in terms of subject matter it is his homeland of Somalia.

When he spoke to Arab News from his home in Minneapolis, a warmth and animation came into his voice when he talked about memories from his Somali childhood which he has captured often in his work.

Asked about his painting depicting an elderly couple sitting together in the early evening light, he said: “I remember how my grandparents would always move outside when the heat of the day subsided around 5 p.m. They would sit and chatter to each other in the cool of the early evening.”

Osman credits his Italian teachers at his school in Mogadishu with nurturing his love of art. His talent won him a scholarship in 1968 to study architecture at the University of Florence. He also enrolled in the Academy of Fine Arts, earning a second degree in 1978.

He recalled the overwhelming experience of the first time he saw the works of great artists including Michelangelo, Raphael, Caravaggio and Verrocchio.

“It was amazing for me when I first saw the Renaissance paintings,” he said. “I could not believe such works were possible.” He added that he was also inspired by the 19th-century group of artists known as the Macchiaioli.

Osman lived in Italy for more than two decades, in Tuscany and Sardinia. He found it was his paintings of Somalia that Italians were interested in, as they offered something different. Throughout his time in Italy he would travel back to Somalia every two years to visit family.

His father, Dahir Haji Osman, was one of the 13 founding members of the Somali Youth League (SYL) which played a key role in Somalia’s struggle for independence from colonial rule.

He recalled how his father, who served as governor of the Galkayo region in the 1950s and later as a provincial governor of Kismayo, would take his family on month-long visits to their homeland.

“I will never forget what I saw when I was young. The people would get up very early in the morning, clean everything and gather up their livestock — sheep and camels,” he said. “I appreciated the nomadic life, although it is very difficult — not like city life. That way of life is impacted by the ongoing conflicts. But time will teach everyone.”

He also recalled wonderful moments of celebration such as Eid Al-Fitr, when hundreds of people would gather to celebrate the end of Ramadan and participate in traditional dances. The exuberance, joy and energy of these occasions are captured in his painting “Jandheer Dance.”

In 1988, Osman felt the tug of his roots and decided to return to Somalia. At first, all went well and he established a successful studio overlooking the Indian Ocean in the affluent Lido area of Mogadishu. But in December 1990 that idyllic life was shattered by the vicious civil war in which he was nearly killed by gunmen who invaded his house. His father had always rejected tribalism but ancient clan feuds and prejudices came to the fore with the war, leading to many vendetta killings. With his family, Osman joined a desperate exodus and finally — after a harrowing month-long ordeal — managed to make it across the border to Kenya.

At that time his wife was living in Boston, so he made for America where he had to start again from scratch. Today he is settled in Minneapolis where the couple subsequently moved. His family is scattered — two brothers and a sister settled in London and another sister in Ottawa, Canada.

Osman, who also works with sculpture and ceramics, has put his talent to good use in Minneapolis, where he devotes a lot of his energy to educating young people about Somalia’s rich traditions and nurturing young African artists. His murals can be seen in public spaces there, and his art is on show in the Minneapolis Institute of Art and the Somali Museum of Minnesota.

Alongside his wonderful, lyrical depictions of Somali life are his abstract works. One, titled “Exodus,” is influenced by the terrible scenes of violence he witnessed during the war — sometimes involving children.

“It was,” he said, “the most horrific thing to paint.”

Osman wants Somali children to know that their country offers far more than such brutality. He finds when he goes into schools that some of the students become very emotional when he shows them his paintings, because they are seeing their country in a beautiful light rather than through the prism of violence and struggle.

“Now my goal is to pass my work and knowledge to the next generation of Somali youth,” he concluded.