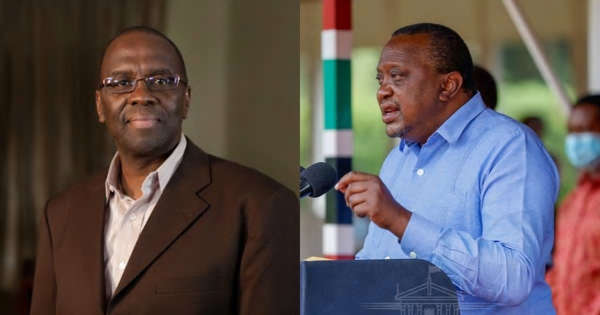 Ex-chief justice Willy Mutunga said President Uhuru Kenyatta is a candidate for impeachment
4TH JUNE, 2021
Former-chief justice Willy Mutunga has said President Uhuru Kanyatta should be impeached for subverting the constitution.
The former CJ stated that they are many cases where the courts have ruled, and Uhuru refused to obey the orders. According to Mutunga, disobedience of the court orders by the president is the same as abolishing the constitution in the country.
“Prsident Uhuru has subverted the constitution many times in diffrent cases that he should be impeached. There are all these cases where the courts have ruled, and he has refused to obey. Disobedience of the court is tantamount to overthrowing the constitution. It’s a very, very serious issue,” Ex-CJ said.
In an interview with the International Crisis Group, Mutunga noted that the president’s behaviour of ignoring court orders and was never bothered is very dangerous. He said the president is a candidate for impeachment for continuous sabotaging Constitution and ignoring court orders by the judges. At the same time, he noted that Kenyan judges face a lot of pressure from their families and other people. In most cases, politicians offer stuff to their spouses and close associates without their knowledge to persuade them to change their mind.
“Judges face all manner of pressures, some even find out that their spause talking to politicians and promising them stuff for them to talke with to their husdand or wife to favour them during judgement,” he stated.
They are several orders which the president disobeyed, including returning the Kenya Meat Commission(KMC) to the Ministry of Agriculture from the Ministry of Defence. This comes to a few hours after politicians from across the political divide have joined hands to criticise Uhuru over his selective appointment of judges on Thursday, June 3.
In a gazette notice, the head of state appointed 34 new judges and rejected six nominees despite a recommendation by the Judicial Service Commission(JSC). Some of the biggest casualties were High Court judges George Odunga and Joel Ngugi, who in May were among the five-judge bench that dealt a blow to the Building Bridges Initiative (BBI) by declaring it unconstitutional, null and void.
Local News Outlets
previous post

Somali artist paints the heart of his country