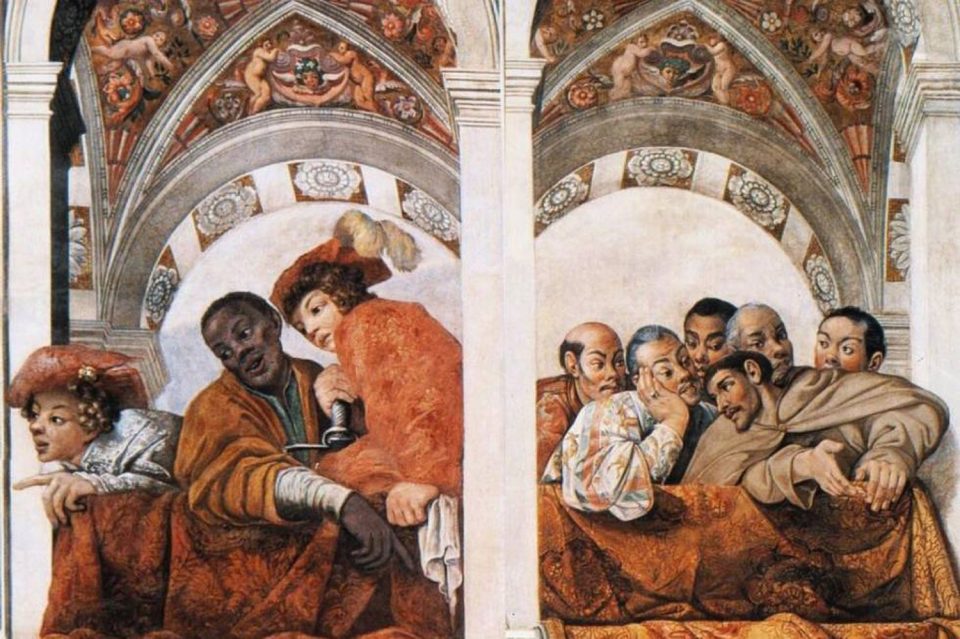 A fresco inside Quirinal Palace in Rome showing the Congolese and Japanese embassies in 1616-1617.

During the Middle Ages and the Renaissance, encounters between African and Spanish kingdoms were largely a relationship of equals

There is a persisting image of Africa as having always been subordinate to Europe to some degree – that the relationship between Europeans and Africans has always been uneven, whether through exploitative colonialism, through condescending paternalism, or through the racism underlying both of the above. But this image of dependency could not be any further from the truth: during the Middle Ages and the Renaissance, encounters between African and Spanish kingdoms were largely a relationship of equals.

Not only were the African kingdoms not isolated from the rest of the world – they were actively exploring it in search of information, trade and political alliances. And Spain was one of the main destinations of these missions. This is the story of how Africans discovered the Iberian peninsula.

The first African kingdom to send a diplomatic mission to Europe was Ethiopia. Around the year 1306, the Ethiopian emperor Wedem Ar’ad sent a delegation of 30 people to Europe with the goal of forming an alliance against the Muslims threatening his empire. The first stop was in Spain, where these delegates met with “the king of las Españas” (no name is provided) before moving on to Avignon in modern-day France to meet with the Pope (seven popes were established there, rather than in Rome, between 1309 and 1377).

Following this early contact, relations gradually intensified and in 1427 a new Ethiopian delegation arrived in the Spanish region of Valencia headed by the Persian merchant Nur-al-Din Al Tabrizi, who brought a letter from Emperor Yeshaq I to Alfonso V, the king of Aragón. In his letter, Yeshaq proposed an alliance between both kingdoms, and Alfonso V happily accepted, sealing the deal with a double marriage between his own brother Pedro and an Ethiopian princess on one hand, and between his niece Doña Juana with Emperor Yeshaq himself on the other. The latter also sent over 13 artisans to decorate the king’s court, but the embassy never made it back to Ethiopia: all the craftsmen died along the way, and the wedding plans were abandoned.

Despite this mishap, relations between Aragón and Ethiopia continued: in his letters, Alfonso V addressed Yeshaq as “the Ethiopian emperor, our dear friend and brother,” and in 1450 an Ethiopian delegation was sent to Naples to witness Alfonso’s triumphant entrance into the city.

Besides these official delegations, many Ethiopians decided to explore Europe on their own. This was the case of a scholar named Yohạnnǝs (1509–65), who arrived in Rome with his father and decided to make the long journey to Santiago de Compostela in today’s Galicia region of Spain. After walking the 2,200 kilometers separating both cities, partly along the pilgrimage route known as Camino de Santiago, he turned south and kept going all the way to Lisbon in Portugal, where he took a ship to Goa, which was then part of Portuguese India. Upon his return to Rome, Yohạnnǝs played a leading role in the Counter-Reformation and spent the last period of his life as the bishop of Cyprus.

Although the Ethiopians were the first to visit the Iberian peninsula, they were not the only ones. In 1602, there was an individual who caused a huge commotion in the courts of Europe: the first ambassador from the Kingdom of Kongo (covering parts of present-day Angola, Democratic Republic of Congo and the Republic of the Congo) to go to the Vatican. Ne Vunda (who was rechristened in Italy as Antonio Emmanuele da Funta) was known for his erudition and for his oratory and diplomatic skills. He spoke Portuguese and Spanish, and was well-versed in European politics.

His journey was not an easy one: from Kongo he took a ship to Brazil, and from there he traveled to Lisbon. Along the way he was attacked three times by Dutch pirates who took everything he owned. After a brief period at the court of Felipe IV in Madrid, he reached Rome on January 2, 1608 (six years after his departure); by this time he was gravely ill and only four of his 25 original companions were still with him. He died three days later after receiving a visit from Pope Paul V, and was buried with honors at the basilica of Santa María Maggiore.

But his story does not end there: while in Madrid, Ne Vunda left a locked chest at the Convent of la Merced, in today’s Tirso de Molina square, where he had stayed. After a considerable exchange of letters between Madrid and the Vatican, it became evident that the ambassador had not made a will, and Felipe IV ordered the box opened. Inside were several letters and decorated dishes from the Spanish city of Talavera that were donated to the convent. The contents of the letters are not known, nor why the ambassador was so fond of Talavera ceramics, because the convent was ransacked by Napoleon’s troops in 1809 and demolished a few decades later.

Another African kingdom with an interest in the Iberian peninsula was Allada or Arda, in present-day Benin. In 1657, King Tojonu sent an ambassador named Bans to the court of Felipe IV. This man, who was immediately renamed Don Felipe Zapata, had been tasked with enlisting Catholic missionaries for Allada. Bans went home a few months later with a delegation of Capuchin monks ready to spread the gospel across the entire kingdom.

Unfortunately for them, they were met with considerable resistance. After a year and a half of failed evangelism, the king summoned them and explained that although he highly appreciated this gesture by his brother the king of Spain, the reason he had requested missionaries was not to adopt a change in lifestyle and religion, but rather because there was a serious problem with people getting struck by lightning in Allada, and he had heard that Catholic priests had some control over the management of these celestial phenomena. The king concluded by noting that he would be much obliged if the monks could solve their meteorology problems, but if not, then he would prefer for them to go back home, as all this preaching was beginning to get tiresome.

Ethiopia, Allada and Kongo are just three examples of African kingdoms that showed an interest in the Iberian peninsula, but the full list is much longer. Unfortunately, this chapter of diplomatic history and exploration was rewritten, and at times directly deleted, centuries later. Africans were denied their own history because it made it so much easier to justify the allegedly civilizing nature of the colonial project and the exploitation of Africa’s people and resources.

Now that movements like Black Lives Matter are finally underscoring the need to give visibility to the role played by slavery in the creation of many European states and cities, it is important that we do not forget that historical justice also means recovering this mostly invisible period in the history of African exploration and diplomacy.

Unfortunately for those wishing to learn more on the subject, there is no book specifically focusing on the journeys of Africans to the Iberian peninsula, but there are two good introductions to the issue on a European scale: Africa’s Discovery of Europe by David Northup, and the edited volume Black Africans in Renaissance Europe.